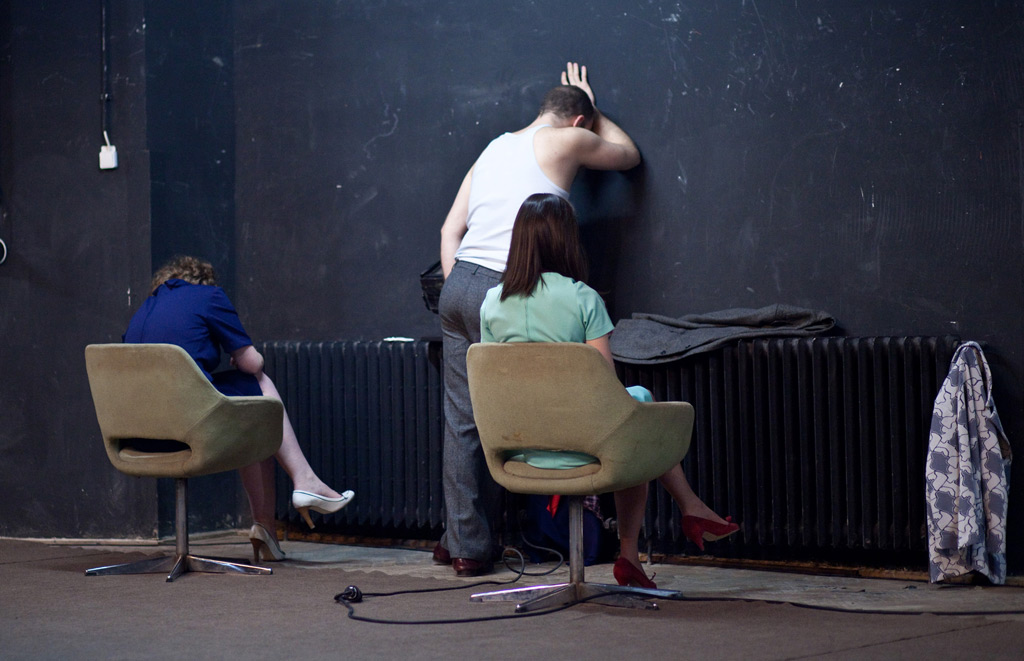 Let’s be honest, this could have gone either way. And I won’t even be so pompous as to suggest that it’s “the duty of the critic”, or somesuch, to find out. I was intrigued by the prospect of a Hungarian production of Coriolanus, so I went along, and in the event I didn’t get much out of it. I would argue, however, that this might have had much less to do with not really getting the Hungarian (the German surtitles were more than enough to follow what was being said/where we were in the – much truncated – story), and a lot to do with really having no idea where the production was *coming from*.

The HAU’s current/new short season, Leaving is not an option, of current work from Hungary, largely in response to the country’s frightening drift/gallop rightwards, politically, is obviously an astute and urgent bit of programming. And in a lot of ways you can easily imagine how a production of Coriolanus might fit into it. Certainly if you’re English you can imagine that. The Titular figure of the play, Caius Martius Coriolanus, is pretty much Shakespeare’s most right-wing “hero”. It’s not even clear if he is meant to be heroic at all.

When last reviewing the play (in a Chinese production at last year’s Edinburgh Fringe) I described Caius Martius as “a militarist fascist beloved in Hitler’s Germany” (where he really was treated as a misunderstood hero). Here he’s a stocky, paunchy, skinhead with a beard and tracksuit. And I’m really not sure where that puts him.

What’s interesting is that the political situation in Hungary – power-grabs by a populist, working-class, grassroots, neo-fascist party – is almost precisely the opposite to the situation depicted in Coriolanus. At the same time, lots of the original has been sheared off the bones of the play here – that first conflict with Volsces that he has to have the shower after seems to have been excised entirely – but it doesn’t seem to have been cut in a way that makes its politics more relevant, it’s still the same dynamic and story, just a lot less of it (a merciful 1hr45 straight through. Still a bit too much, but much better than a full 3hrs+).

But ultimately it’s not really the lack of mapping politics that hampers the production. I’d have been perfectly happy to watch a modern-dress non-auteured production of Coriolanus in a foreign language if there’d only been a bit of oomph to it. As it was this felt relaxed to the point of indifference. I guess this might be a very British way of thinking, but despite the evident truthfulness of the performances, somehow they really didn’t seem to be getting even to the edge of the playing area.

I say “playing area” since one of the better things about this production was that they’d stripped all the seats out of the HAU Eins auditorium (see photo, bottom), the audience were sat on a temporary seating rake reaching up from the floor to the stage, facing the lovely wood-panelled auditorium, balcony and circle. It was a great, unfussy way of making a familiar building strange, and creating a much more rough-and-ready space for this rough-and-ready production. I don’t know if there was a consequent problem with the acoustics, or whether the production was always just going to feel a bit comatose, but there it was.

The company had also woven a bunch of sacred music into the piece (a Catholic mass, as far as I could make out from the Latin), as well as Volumina’s very secular rendition of Abba’s The Winner Takes It All, which she delivers seductively sprawled on top of the large chest freezer that constituted pretty much all the set, her legs wrapping ever more round the mic stand. So, yes, there was that. I have literally no idea why. Post-drama? Post-Brecht? Satire of some politics I couldn’t hope to identify? Still, as a moment within the performance it rather stood out, along with the other singing, as being approximately 300% ore engaging than the stumping around and taking to each other that constituted the rest of the play. It’s true that the British way of doing Shakespeare can often seem bloody strange and more than a little embarrassing, at least until one tunes into it and decides to give it the benefit of the doubt, and believe that probably everyone shouting is somehow for the best, but it does at least jolly you along. Even though I mostly scowled through the download of the recent Donmar NT Live broadcast version on the coach to Hamburg yesterday, I think I was probably less resentful of it than I was of this Hungarian version – although there’s every chance that could also have been because I could have switched it off whenever I like and paused it as many times as necessary, but, in amongst the nonsense, there was also a certain amount of clarity and even in one or two cases a bit of characterisation which felt lacking on Monday night. 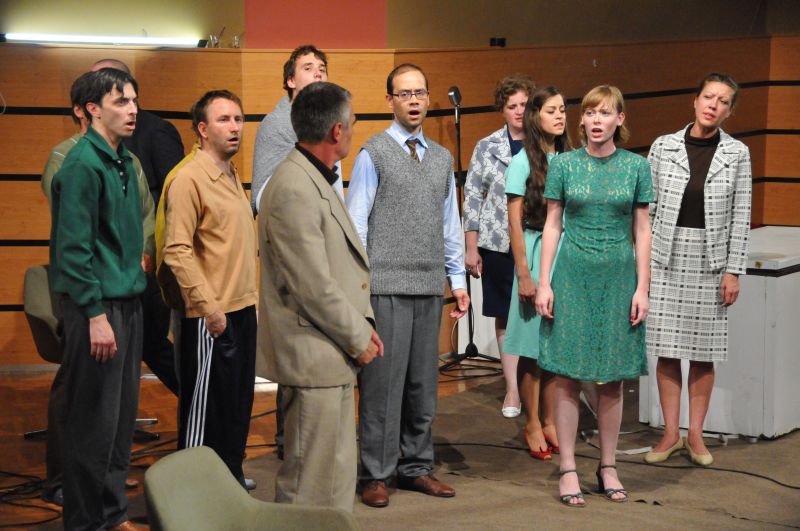 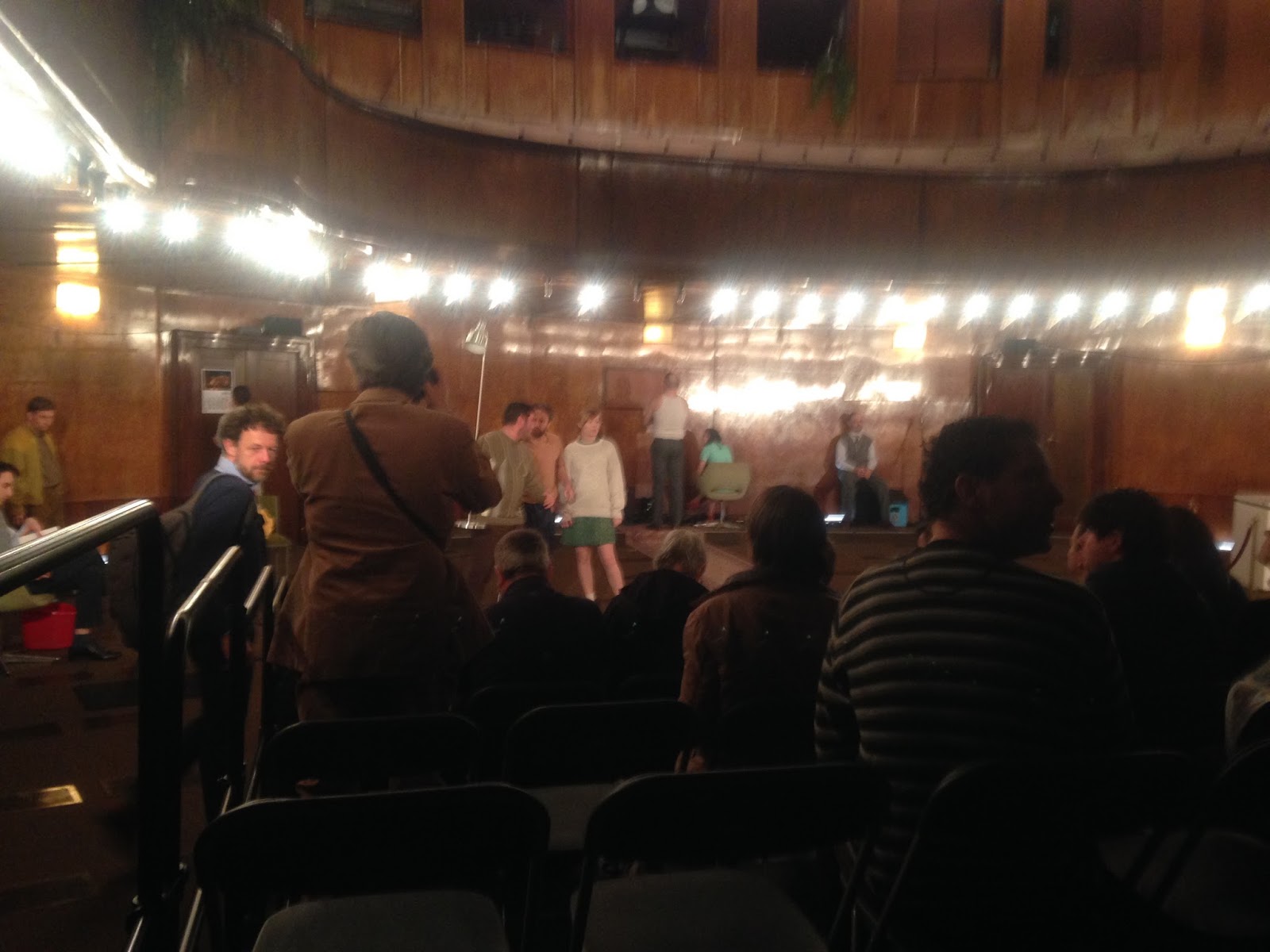 Having once been to a week long festival of new work in Hungary, I too was frequently grateful for the music ....