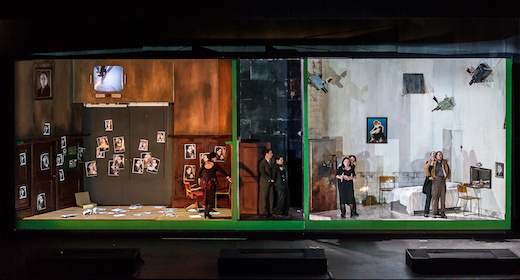 Richard Jones’s new production of Handel’s 1725 opera Rodelinda is pretty much an unmitigated triumph. I’ve been to *a lot* of press nights, and I don’t remember the last time I saw a reaction quite so joyfully rapturous. And, this wasn’t first-night, papered-house sycophancy, it was genuine appreciation at the wit of the staging and the gorgeous treatment of the music.

Plotwise, Rodelinda... well; if you think Handel’s music is baroque... Apparently it’s based on heavily fictionalised episodes from seventh century Lombard history (the ENO’s programme is a wealth of useful information). Boiled down: it opens with the titular heroine (Rebecca Evans) alternately weeping for her recently deceased husband, Bertarido (Iestyn Davies), the banished king, and trying to try the advances of his deposer Grimaldo (John Mark Ainsley). Grimaldo, meanwhile has to break off his engagement to the dead, banished king’s sister, Eduige (Susan Bickley), and manage his ally Garibaldo (Richard Burkhard), who seems to be plotting his own advancement at the expense of anyone who stands in his way. In turns out that the husband has faked his own death, and the rest of the story concerns his plans to romp back to power and depose his usurper.

It’s really hard to make out quite what sort of tone Handel might have originally envisioned when he sat down to write this, let’s be honest, quite bizarre little piece. It is entirely to the credit of Jones, and also his libretto-translator Amanda Holden and designer Jeremy Herbert, that they haven’t let this problem of authorial intent trouble them one iota. This production takes the opera by the horns, presents the music gorgeously, the plot in a way that makes sense, and in a production that strives at every turn to wring as much movement and drama from it as humanly possible. Given that a majority of the music exists at a pretty stately pace, I for one was enormously grateful that at the same time as executing beautiful singing, the cast were being put through their paces moving between the rooms of Herbert’s multi-room set and always being given new things to do or to react to extrinsic to the action of the music itself.

To say that the design of the piece feels like it owes more than a little to Katie Mitchell’s recent work in opera (especially Written on Skin) would be an understatement. However, where Mitchell’s operas are all poise and rigour, Jones (and Herbert) allow for a great deal more humour, occasionally bordering on the Pythonesque – there is a brilliant running gag in the third act where Bertaldo mistakenly stabs his long-lost servant Unulfo (Christopher Ainslie). Doubtless, in the original, not very seriously. Here, almost to death. Making Unulfo’s repeated protestations that he’s fine really, when all the while following the king around on the point of death from blood loss, incredibly blackly funny. At the same time, the set reflects this directorial panache hopping from the Mitchell-esque trio of rooms to a neon bar and back again.

Jones has also added a whole new (silent) character, that of Flavio, Bertarido’s son, mentioned in the text, but unseen in the score or libretto. Flavio, like the trickster in Three Kingdoms before him, he bespeaks not only a director completely in control of his take on the material, but a welcome, and seearingly intelligent way of adding in modern touches and intrigue, not to mention making possible a blink-and-you-miss-it coda which, totally strips away Handel’s desire for an Enlightenment reconciliatory ending.

Christian Curnyn’s conducting seems to me to capture the precise tension between the lyrical and the almost-mathematical in the music. The score itself is a richly varied thing, making use sometimes of the whole orchestra for passages of both lyrical beauty or spiky tension, but elsewhere there is much use of mostly woodwind (and recorders?) or mostly harpsichord/s with just the barest underscoring to bring out the texture of its treble-y picking.

Another interesting feature of the music is the inclusion of two counter-tenors (Bertarido/Davies and Unulfo/Ainslie). While this did admittedly put me in mind of the Blackadder music a bit(has any TV theme tune ever put a whole musical genre to the sword more pitilessly?) – and here, given Holden’s frequently amusing English libretto-translation, the humour was clearly often at least partially deliberate – it also offers some richer rewards. Most notably in a rare duet (this is pretty much the only one, in fact) where Bertarido and his wife sing together in more or less exactly the same key in Io Io t'abbraccio, their voices blending and spiralling into something more spectral and unexpected than the usual tenor or bass-alto/soprano male-female duets.

I’m not sure that there’s much to be extrapolated from the piece in terms of “meaning” or it’s politico-philosophical standpoint. I’m always wary of reviews which declare any work of art to be apolitical. And I’m sure that there’s plenty that could be dug up around what Handel intended at the time (given his fairly Royal credentials, it’s probably not so very progressive), or what ENO/Jones intend now. But I don’t think I’d be sticking my neck out too far to suggest that mostly what they seem to want – and achieve by the bucketload – is t tell the story as interestingly and effectively as possible and to make the music sound bloody brillint. Which, for once, doesn’t seem like such a bad idea at all. 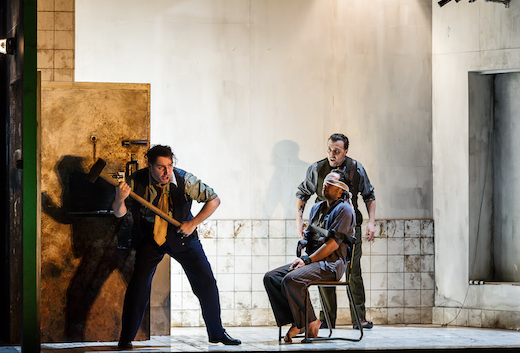 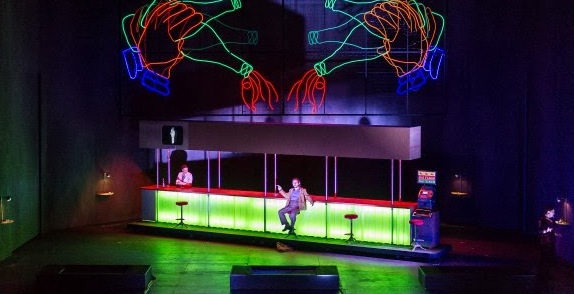