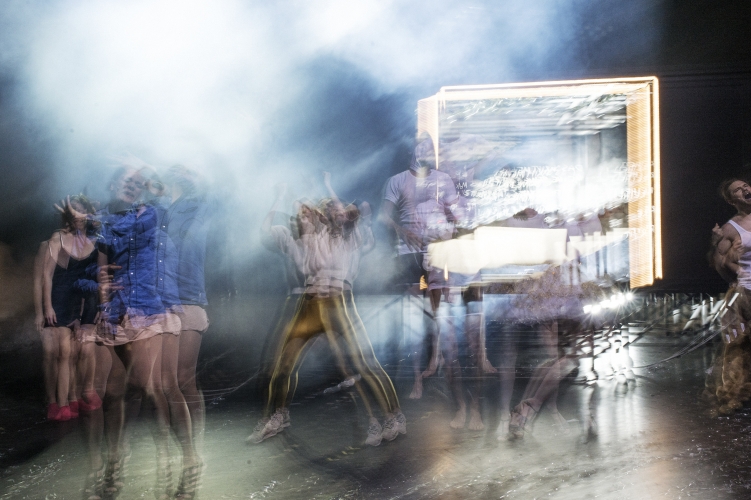 Seeing the catastrophic German première of In der Republik des Glücks at Deutsches Theater last November I wondered long and hard if there was any point in Germans tackling this play at all. I backtracked pretty hard on my initial impressions of Dominic Cooke’s world première production of the play at the Royal Court. Well, Anne Lenk’s production for Thalia Gaußstraße teaches me that I needn’t have worried, or backtracked half so much.

My God. It’s brilliant. It’s an absolute revelation. It’s like Forced Entertainment taking a hammer to the second and third acts of the Royal Court production. Suddenly you see just how limiting that static stuck-on-stage, fourth-wall literalism was.

The first genius idea in Lenk’s production is remembering that the whole thing is taking place in a theatre. In this respect it reminded me a little bit of Katie Mitchell’s still-world-beating production of Attempts On Her Life back in March ‘07.

The first scene is still staged “in a room”, but here the room – while observing the niceties of the Christmas tree, chintzy wallpaper, and large Christmas Dinner Table (this one replete with giant turkey, glasses of wine, roast potatoes and so on...) – is in a relatively small glass display cabinet, and on a significant raised platform. It’s like this family are in trapped in a reptile house. There is barely any room around the table for them to even move.

The family here are perhaps more stylised than “naturalistic”. Perhaps like something out of Wes Anderson or early Tim Burton. And they’re played by perhaps a younger-(or older in the case of the teenage daughters)-than-realist cast in appropriate wigs and costumes. Interestingly the focus here is mostly pulled by the daughters. In very short skirts, and constantly fidgeting, one flirts and touches herself while the other sulks, smokes, and a pulls a bottle of gin or vodka from under the table and necks several glasses. They then pop under the table and swap costumes. It all totally supports what’s going on in the scene, but it also adds an additional layer of movement and theatricality. Their relationship to “Uncle Bob” (who here “pops up” by ripping away a hole in the wallpaper of the rear wall, and is apparently played by the German Dan Stevens, below) is also interesting. 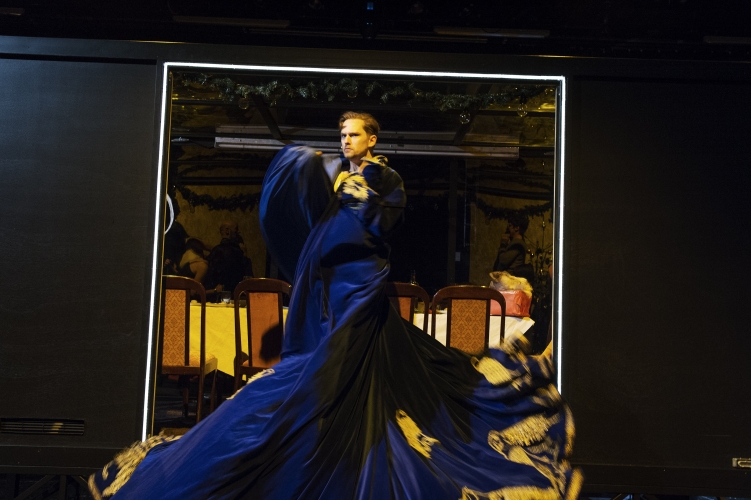 Overtly flirtatious and sexualised rather than frighteningly hinting at some old and half-buried shameful history of abuse. When Madeleine turns up in her dress that’s “like being zipped into my own vagina” (here a white fluffy number, rather than Michelle Terry’s tight silvery one) she does so *outside the box*. Uncle Bob joins here outside. There are spotlights on them. The darkness in the hangar-like space around the little, suspended, reptile-house room lights up with strip lights on the floor. Madeleine’s song, I Never Go Deep – the tunes and mostly the arrangements are the same (can we say original?) Roald van Oosten as the court, but here performed with a pile more welly and a bunch more volume, so that they actually work.

I have to admit, I’ve probably listened to the In the Republic of Happiness original soundtrack more in the past couple of years than quite a lot of other things. As a result, I guess watching this production there’s an element of me being a bit like one of those people who goes to see Wicked every other week. By the end of the first act I was just grinning from ear to ea, beaming away at how great it all was. Then it got a fuck-tonne better.

The “difficult second act” (“THE FIVE ESSENTIAL FREEDOMS OF THE INDIVIDUAL”) comprises, as we remember, of five parts with different titles – The Freedom to Write the Script of My Own Life; The Freedom to Separate My Legs (it’s nothing political); The Freedom to Experience Horrid Trauma; The Freedom to Put It All Behind Me and Move On; and, The Freedom To Look Good & Live Forever. In the Cooke/Court version these were all played together with the cast seated on (original production of) Crave-like chatshow chairs, and the songs which intersperse them were (I think) also performed seated.

Here, instead, the raised glass room is turned round and later pushed off to one side. The first section sees the cast all running to and fro across the stage, rapidly putting on and putting off different costumes. It’s all manic energy and playing a game. There’s no poise, no *seriousness*. It’s incredibly refreshing. And it works brilliantly. The songs – with the whole cast on their feet and mobile, and with one using a guitar radio-miked to an amp over which runs the titles of the individual scenes – feel like they organically arrive when they need to; like the scenes almost *logically* build to a pitch where there can only be a song. The running about only lasts for the first section. Beyond this there are various different distinct routes taken through the (unassigned) lines. What’s beautiful about the way that this section is handled as a whole is that it gives the whole a sense of movement. A journey for the actors (and consequently audience) through the developing themes. There’s a movement from the anarchy of the first to a louche second, an angsty third – there are perhaps divisions between the speaking actors and others who scrawl in white marker on the glass walls of the abandoned family room. Four (The Freedom to Put It All Behind Me and Move On) is a kind of group therapy session conducted quietly at the back of the stage while a another performer in a giant cat head (Yes! Animal head! Result!) stalks the abandoned plates of the vandalised family room, culminating in the howl-of-angst Theraputic Song. Except here the therapy plainly works (well, ironically, at least). The final part, The Freedom To Look Good & Live Forever, is delivered by the whole cast looking slinky and relaxed in bathrobes. This investment, even just a bit, conceptually, in the things that are being said in the script/by the cast has the unexpected effect of making it look and/or feel much less like the “roll call of contemporary obsessions and afflictions” and much more like some things that people actually do say, or think, or go through. Of course many are still preposterous, hilarious or sardonic, but the way that this production finds a way of moving through them, and creating brilliant, messy stage-pictures at the same time puts Cooke’s Court production to utter shame.

And then there’s the final scene. Uncle Bob is just on stage. In a spot-light. Alone. Madeleine eventually turns up in another spotlight. And that’s the entire staging of the scene. A scene which at the Royal Court they built a whole room for, and contrived to have the actors pretend that there was no audience. And the room they were in was real.

The idea of the end-point, the Republic of Happiness being *the stage*. With us, the audience, kind of present and acknowledged, perhaps as “the society”. It’s so simple and yet utterly, utterly brilliant. Having seen it, I now can’t really imagine anything better. Rather than being perplexing or opaque it feels immediate and raw. Uncle Bob’s “Happy Song” at the end of the scene also feels funnier and more painful than ever before.

Overall, rather than making the play feel like an oblique series of propositions with which one could agree or disagree as the mood took you, instead it felt like an actual, organic, functioning piece of theatre. The cast are uniformly terrific, charismatic, and stupidly attractive. The intelligence of the original script remains, but rather than being thinly supported (i.e. unwittingly murdered), it has here been given a staging that augments the intelligence of the text with an additional intelligence, offering propositions and motion. A gorgeous, energising production and one which totally rehabilitates Crimp’s play. Best 1hr50 I’ve spent in a theatre for quite a while. 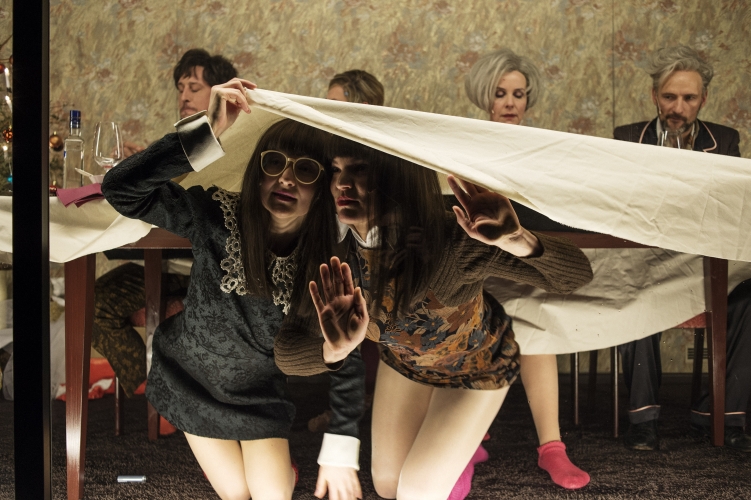 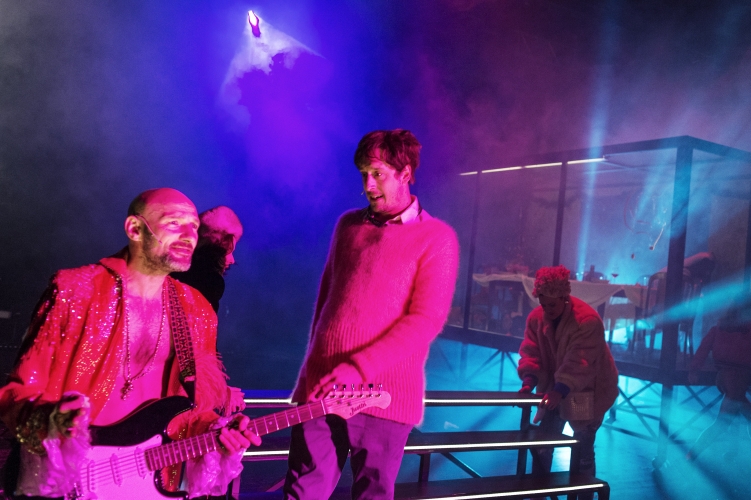 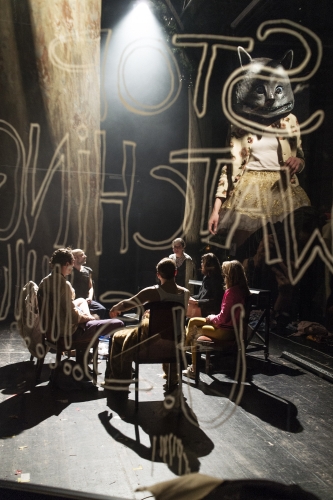 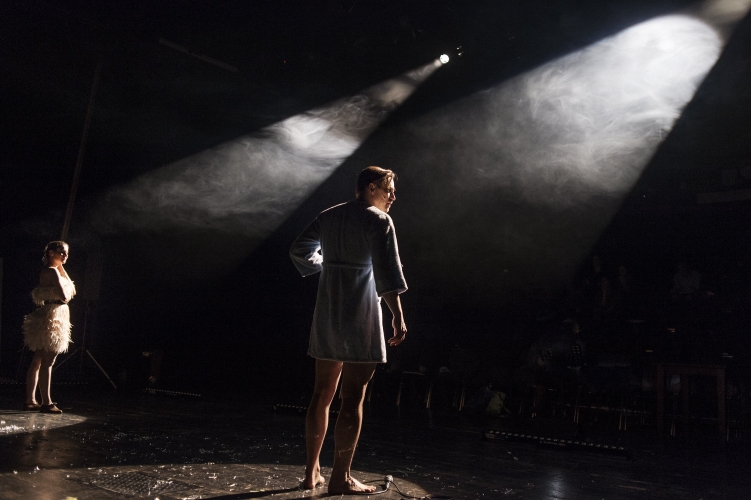