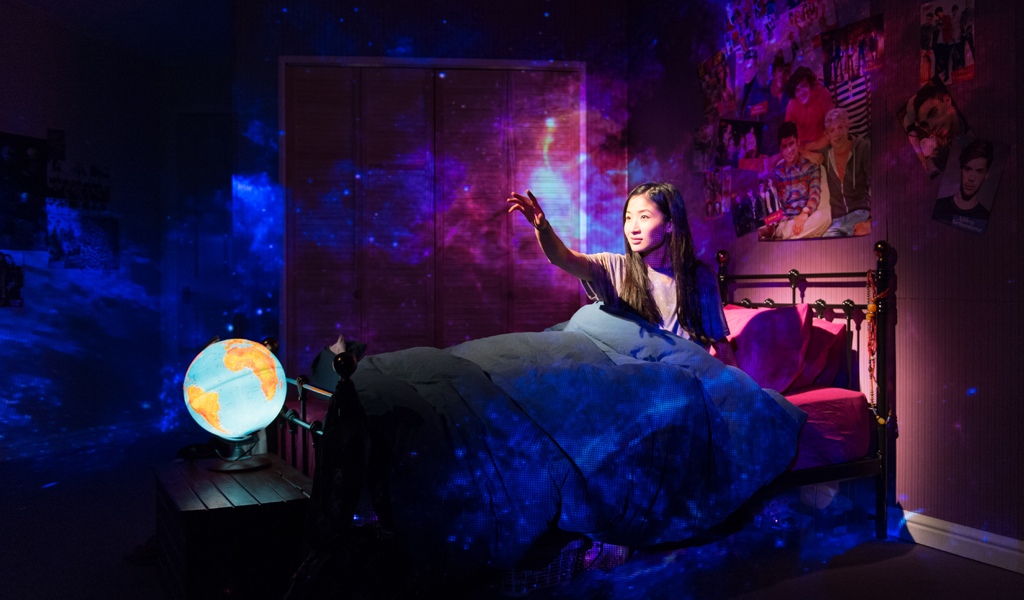 This new commission for the Unicorn, by its presiding genius artistic director Purni Morell, sees Chris Thorpe creating a new version of Marlowe’s Doctor Faustus for young people (I think the posters say 14+). In [iambic pentameter/blank verse]. Here Herr Doktor has become Hannah, an unremarkable teenage girl (played with tonnes of youth-theatre appeal by Kae Alexander) who lives with her mum and her lizard, Dave, in a pleasant suburban house. Her mum (Irma Inniss) is a research scientist looking into marine pollution, btw. So far, so not-Faustus.

Left alone in the house with chores, and with her lizard escaped from its tank, Hannah invokes all the powers that be in her wishes for everything to be done, for the lizard not to be missing, and, well, the general wishes of all children (and Doctor Faustus) for unlimited personal power. At this point her lizard, transformed into human form (either Ian Keir Attard or Rhys Rusbatch – the other one is the excellent narrator and I can’t find a programme), returns and offers to grant her wishes in return for her soul.

It’s an interesting premise. Thorpe’s Mephistophiles/Dave figure certainly has an easier job than his original counterpart. After all, as he points out, the concept of “the soul” is a pretty airy-fairy one in the modern, scientific age. Hannah’s misgivings certainly don’t even amount to the informed consent given by Faustus. What’s also interesting, and well-imagined/captured, is the different scope of Hannah’s ambitions for her new-found power. Mephistophidave creates her a friend, but admits that his power cannot run to conjuring a new human from scratch, so this gambit flounders.

Indeed, in common with the original, there’s a certain bagginess to the middle of the piece, which is just to do with the fact that it’s the spectacle of someone who can theoretically chose to do anything being faced with that level of choice an not really having either much of a plan, which in turn leads to not very much dramatic tension. Actually, it’s better here than in the Marlowe, which is just a cavalcade of nonsense and (ironically) quite childish ideas (Helen of Troy, the deadly sins, being invisible and prodding the pope, etc. after silly etc.). Here instead Hannah wants to try to use her powers for good. Mephistophidave inspires her mother with a solution to clean up global pollution. Hannah wants to go further. Having unwisely previously wished for global fame, superstardom and adoration (as someone wise once said, “before you wish to be rich and famous, try just being rich first”), and essentially kicked off a global conflict over her acclaimed beauty (perhaps a not very thinly veiled attack on organised religion), Hannah wishes for the entire conflict to be finally over forever and for there to never be any more fighting. Mephistophidave leaves planet earth a scorched pebble in response.

Simon Evans’s production is a rather beautifully realised multi-media affair. Starting off in a lovely plush bedroom (although gallingly much bigger than any that anyone in the audience is ever likely to have lived in, myself included), which then slides back enabling the whole front apron of the stage to become a large projection floor presenting whizzy zoom-in, zoom-out Google Earth type images, and then, much more impressively a large moving sea replete with moving (and later talking) turtle. (Design: Ben Stones, Lighting: David W Kidd, Projections: Andrzej Goulding.)

So, yes, it’s a gorgeous production of an interestingly knotty bit of writing – Thorpe’s command of poetry here shouldn’t be overlooked. It’s actually quite remarkable how closely he manages to fit his voice to the form or vice versa. Yes, you can still hear the sardonic Manc. accent of There Has Possibly Been an Incident in this play for young people, turned down maybe only a couple of notches, but with much of the same patterning and phrases.

There’s an interesting negotiation at the heart of Hannah, though: how does one re-tell a myth when the foundations on which it rests – a belief in God, Satan and the afterlife – have been all but completely removed from modern society. Granted, there’s the Harry Potter option – that you can just tell people that this is how this fictional world functions and deal with it – but Thorpe opts for the more interesting discovery of contemporary parallels. I mean, sure, there’s still an element of magic about the piece (we no more believe that lizards can shift shape than in heaven and hell, unless we follow the teachings of David Icke), but the “message” of the play, if that’s not too clunking a formulation, is ultimately about the dangers of unfettered individualism. It’s a fascinating thought, and one which I didn’t see coming. Even trying to “be good” on our own is tantamount to secular wickedness, is Thorpe’s basic assertion. “We either try together, or everything is ultimately doomed to failure” is the message. It side-steps questions of secularism versus religion altogether and asks a much more fundamental question about our political reality. And hopefully it’ll spawn a bunch of proper hard-thinking in the young (and not so young) minds who get to see the piece.
Posted by Andrew Haydon at 17:12