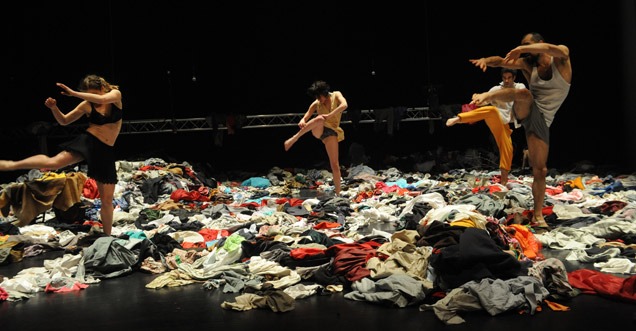 I went into Tauberbach pretty much blurb-free. I went because it was “the new Alain Platel”. That was good enough for me. Since putting in my ticket request, I was pleased to see that this co-production between les ballets C de la B and Münchner Kammerspiele had also been selected for this year’s Theatertreffen, but I’d still managed not to read anything about it. In fact, if it hadn’t been for a chance remark beforehand by a friend who works for HAU about the genesis of the piece, I’d have gone in with literally no more information than the title, and I hadn’t really even thought about that. All of which is to say, I’m now going to rabbit on about both the concepts behind the work, which I’ve since read up on, and a bunch of impressions I formed during the show, so if you’re thinking of going to see it, there’s possibly some value in just going in as blind as possible, but, equally, I think going in with a bunch of knowledge might be no bad thing either. 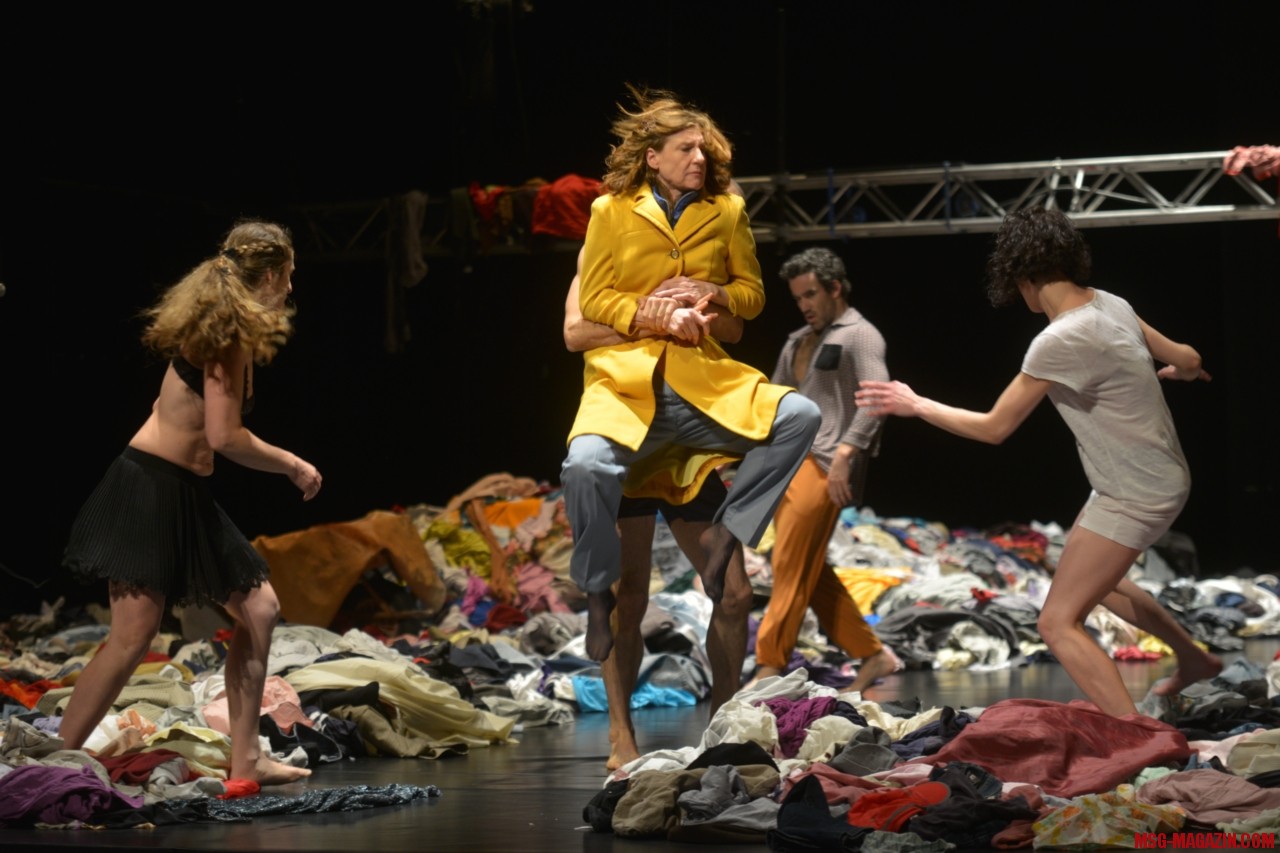 “Tauber Bach” translates literally as Deaf Bach and is the name of a project by the Polish artist Artur Zmijewski in which he got deaf people to sing various works by Bach. This music, accompanied by a soft (recorded) church organ, is the soundtrack to large swathes of Platel’s new 90 minute choreography. Another strand of the piece is a, what? an investigation into-, an exploration of the life of Estamira, a schizophrenic woman who lives in a waste dump in Brazil, and who was the subject of a documentary by Marco Prado. This was apparently brought to the table by actor/performer Elsie de Brauw who also plays Estamira in the piece – the six-strong company comprises both actors and dancers (Berengaria Bodin, Elie Tass, Elsie de Brauw, Lisi Estaras, Romeu Runa, Ross McCormack).

Playing on a stage strewn, covered, with copious piles of colourful clothes (stage design is credited to Alain Platel and les ballets C de la B), the piece opens with de Brauw speaking, shouting, at the audience (mostly in English). Her words are sometimes picked up, underscored, questioned or mocked by a deep, disembodied, amplified voice (weirdly, it most reminded me of a reverse Strindberg and Helium where Strindberg is the floaty, echoey one). Six microphones hang to mouth-height from the flies. There is also the constant recorded sound of flies buzzing.

The overall effect of all this was to put me in mind of a whole load of different plays by Samuel Beckett. That constant refrain about “the buzzing, the buzzing” from Not I, the rubbish strewn stage of Breath. The things hanging from the ceiling of Act Without Words I. Even the voice feels familiar from Beckett (though I couldn’t name a specific play. Is there one?), it feels like a distillation of how that Beckettian universe feels, how it functions; it’s like the voice of a mocking, cruel or indifferent universe. So that was one strong impression created by the piece.

Another is the effect of the Bach music – quite aside from the voices of the deaf singers – is to strong recall that sense of period; that mittel-European, early protestantism aesthetic. This underscored by many of the poses struck by the frequently unclothed, or largely unclothed, performers, one of whom, at one point, hangs from a lowered lighting rig bar like a crucifix. This sense of the nearly-medieval also seems to speak to the scale of poverty from which the piece draws part of its inspiration.

Having largely forgotten about the literal translation of the title, the voices of the deaf singers, rendering Bach’s music as they imagine it to be – as they imagine the notes might sound with no chance of having even heard the original pieces of music, or indeed any music, period – is a strange experience. I didn’t find it comic, as it’s suggested some might. Nor did I find that it felt exploitative or unkind, which is perhaps also a potential possible reading. I’m not sure exactly what I thought it brought to the piece, though. Obviously as a spur to the imagination of Platel and the company is was crucial as a source of inspiration – something to try to get inside – but as what felt like a partially detached sonic experience it didn’t *read* as suggestively as many of the other elements. (I’m actually quite keen to see the piece again at Sadler’s Wells having read up around it to see if that changes my relationship to its various parts.)

Elsewhere there is perhaps the best onstage “sex-scene” I’ve ever seen. The cast are all ridiculously attractive anyway, but here, unusually, that fact seems to be more explicitly acknowledged than in much contemporary dance.

All of this does make for a strange disconnect between subject matter and the feelings evoked by the piece. If one was so minded, one could probably feel quite worried that Platel and company have created such dazzling, beautiful art out of profound disadvantages (I’m thinking more of the poverty and schizophrenia than the deafness, although obviously getting deaf people to attempt to sing something that they have never heard – and can’t hear the results of their attempt either – also compounds the sense of their disability). On the other hand, perhaps it is precisely this seriousness of subject matter that enables the piece to have such an impact.

As with much (most?) dance, in a way what you take out of it is as much to do with your own preoccupations, and where your mind wanders during the performance, as it is to do with the actual content of piece itself. Granted the contorted shapes created by some of the performers, the lingering eroticism, the jarring voice, the stage-pictures have a bearing, but, even while one is admiring the dramaturgy (Koen Tachelet and Hildegard de Vuys), one is also probably supplementing it with a wealth of material that no one connected to the production ever considered.

I’d quite like to be able to be more conclusive, but it’s not that sort of piece. I loved it very much, I think, but it’s incredibly difficult to say why in a way that even begins to do it justice. It looks great, the performers are brilliant, and the whole is so well made and put together that you could just go and bask in its well-made-ness, although I’d defy anyone trying not to get caught up in reflecting on the action as well.

Thank you for this: interesting and useful before going to the show.