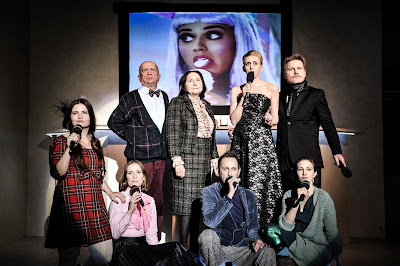 This isn’t so much a review as an extended apology to Dominic Cooke. It’s also not a review because I happened to catch the Deutsches Theater’s German language première of Martin Crimp’s In The Republic of Happiness – of which I’d somehow been unawares when I planned my recent trip – as the guest of a director friend rather than on a full press ticket. As a result, neither she nor I felt sufficiently compelled to return for the second half of the production after the interval. So I can really only talk about the first half and why I couldn’t bear a second... (I wasn’t the only one, it seems. Even the polite Nachtkritik kritik says: “Dann ist Pause. Man möchte davonlaufen.” (Then is interval. You want to run away.))

In my review of the world première production at the Royal Court I remember being quite stand-offish about both play and production.

Of Crimp’s text I worried: “ it suggests nothing so much as a man who has been forced to spend all the time since his last play locked in a room with copies of the Daily Mail with a bit of Jeremy Kyle and Celebrity TV or biographies for light relief. On one hand, it does a good job a skewering these imagined truisms that apparently litter modern society. On the other hand, it almost feels like it has bought into one too many Daily Mail myths about “therapy-speak” and the “therapy society” etc.”

And of Cooke’s production I said things like: “I sat in the stalls mentally redirecting, or at least wondering what what else might have been.” and: “It’s much more the whole conceptual framework [that is lacking here]. [It] feels like The Path of Least Resistance. I don’t think it would be controversial to suggest that Dominic Cooke’s metier isn’t experimental theatre. Almost too inevitably, I couldn’t help wishing Katie Mitchell had been free to direct this. And Miriam Buether’s set isn’t one of her best. The first scene is more or less *right*. But where the obvious *massive* scope for interpretative freedom kicks in, then Cooke seems to more or less side-step it completely. Part two is more or less a chair-for-chair staging of Vicky Featherstone’s production of Crave...”

The most valuable thing I took from last Thursday’s performance was just how much greatness I take for granted in British theatre. Reading myself saying Cooke’s staging of the first scene is “more or less right” now strikes me as horrifically churlish in the light of Thursday night. Indeed, even without Thursday, it’s a pretty harsh judgement on a production which (despite what the above sounds like) I’d also included in my top ten productions of 2012 and of which my memories are much fonder a year down the line.

The fact is, I now remember the first scene in Cooke’s production as being nigh-on perfect. Certainly a more-or-less infinite improvement on Rafael Sanchez’s production for DT. As someone who regularly argues for interpretative freedom for directors, my using the notion of “perfect” should obviously be attended with the appropriate scare marks. I don’t think Cooke’s production was the only way to make this scene work. In fact, if anything, what was most irritating about Sanchez’s version was that it was more-or-less just the same thing, just set in a different room: albeit with infinitely less precision as regards the text, no apparent appreciation of the humour, and absolutely no observable dynamics between any of the characters speaking.

The different room was, of course, interesting. What Janina Audick had knocked up might be regarded as being as typical a German family living room in the same way as Miriam Buether’s was a “typical” English dining room – perhaps both slightly stylised (Buether’s more than Audick’s). The different ways that each set sat in relation to the auditorium was also interesting. After wondering slightly about the way that the transfer of the small black-box staging by Nübling of Stephens’s Morning suddenly found itself bearing down on the audience in a large, much lighter room, here I found myself initially fascinated by the change of dynamic between Cooke’s high-stage, dark room version of Scene One (“THE DESTRUCTION OF THE FAMILY”), here became a largely, airy, open-plan white room on stage in front of a large, democratically ordered single raked audience (by “democratic” I mean: I think all seats have the same price and relatively speaking the same view – you could choose to be nearer or further away from the stage according to preference, but it’s not a big enough space for that to make a substantial difference, unlike, say, the upper circle at the Royal Court).

As such, this initial picture of what “family” means for each production starts off in a radically different place. In Britain, it’s almost a cartoon of barely-out-of-the-Victiorian-period awfulness and awkwardness. In the German reading it feels like the “issue” of a family starts off in a slightly less loaded place. No reason for this to be a stumbling block, of course – God knows that Germany has lived with pretty much the heaviest inter-generational questions in Europe for the last 70 years, although that period must now be coming to an end, at least in the West. But, in Sanchez’s production none of this seems to be of interest to the director. The lines are delivered clearly, but the reactions to them – to everything that anyone says, in fact – well, the lines seem to appear in the space and then disappear again without making the faintest difference to anyone. Of course, this could be – must be? – a directorial decision. But coupled with a cast who seem to be sleep-waking through the thing, with no apparent enthusiasm or energy... Well, it might all be deliberate, but it didn’t seem to be working as an approach for me, my friend, or anyone else in the auditorium (we certainly weren’t the only ones to duck out at the interval, and those who stayed to the end didn’t seem especially pleased to have done so when they left).