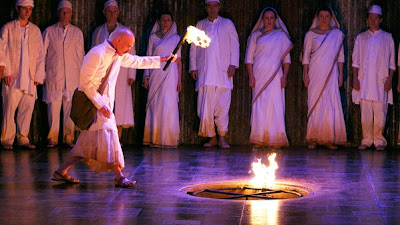 “Philip Glass’s undulating, ecstatic opera in the key of resistance returns to ENO for a third time, and it’s an honest to the gods near-spiritual experience of sharp, hot beauty and political provocation. Director Phelim McDermott’s production well deserves the acclaim that’s been heaped upon it in the six years since its premiere: its balancing of eye-widening spectacle and delicate intimacy is unrivalled, and despite the stately ritualism of its pacing, its message cuts deep and fierce.”

So said my colleague Stewart Pringle, reviewing this run of Satygraha’s press performance for Exeunt a fortnight ago. I open with his magnificent first paragraph largely to flag up the fact that another viewpoint, expressed by a near-contemporary, whose views I totally respect, is possible.

I haven’t read on in Stewart’s piece, because I want to work out *why* I disagree for myself rather than get embroiled in a point-by-point, “ah, but!”-style disagreement. At the end of the first third (the show has three fifty-minute sections, coupled by generous interval allowances) I was kind of rapt. I had, granted, arrived fifteen minutes late (I was at ENO the night before for a three hour Magic Flute which started at half seven, this is a 3hr10 opera, so it starts at seven, silly me), but given the pace that the thing is moving at, and its general level of penetrability, I don’t think I missed a big old magical opening and all the exposition.

The actual scheme of Satyagraha is rather appealing: what Glass and his librettist, Constance De Jong, have done is construct a piece which nominally/fleetingly tells the story of Gandhi’s life with a text composed from excerpts from the Bhagavada Gita. As such, unusually for ENO (whose main remit is to stage operas in English), it is through-sung in Sanskrit. I presume this is because it was created by an English-speaker, and therefore all the foreign words are therefore allowable. If only Mozart and Wagner had had the foresight to be actually English-speakers. Then no one would have to translate their gorgeous German libretti at ENO either (see: here). Occasionally, but by no means comprehensively, bits of what they are singing are projected in English onto associate director Julian Crouch’s cardboard-as-corrugated-iron cyclorama set.

Improbable’s design for Satyagraha spends a lot of time in the realm of the deliberately ugly. The corrugated iron walls (which eventually part at the finale to reveal blue skies) perform well in their allotted function as an oppressive prison-like setting. However, they are also covered in doors and windows. So people can stick their heads in, the (very occasional) puppet can appear, and the enormous cast of chorus and extras can walk in and out. So not much of a prison, actually. But the sense of oppression remains. It is perhaps significant that the costumes are designed by someone else (Kevin Pollard), the videos are by Leo Warner and Mark Grimmer, and the puppets – not credited with a sole designer – have been knocked up by just about everyone Improbable have met, by the looks of the programme.

Re: the puppets – pretty much every photo I’ve seen of the production includes them. They are on stage for a possible grand total of five minutes. So that’s quite a weird disjuncture. When they appear you think, aha! Now we’re getting to it. But no, all the huge ones with human faces just appear in a fraction of the short bit when Gandhi is in South Africa (of which, topically, more later).

On the costumes: they seem to cause a number of different problems. One is that the production never seems quite stable in terms of tone. Gandhi (sung by the resolutely white and not-at-all-Indian Alan Oke) is dressed precisely as Gandhi is seen dressed in photos. Now, I don’t have a problem with a white person playing India’s most famous anti-British-rule campaigner. I’m sure even Gandhi would chuckle at the irony. But to have said white guy dressed exactly as Gandhi feels like a misstep. Sure, he’s white; it’s non-naturalistic... apart from the entirely naturalistic costume. You see what I mean? This problem is compounded by elsewhere the costumes, notably of the British rulers and army in India, being highly colourful comic-book-like creations.

It’s a style of “alternative theatre” that I think was at its height in roughly 1996 (coincidentally the year Improbable formed). It isn’t my favourite aesthetic in the world, but it’s worked better than it does here. But now it also has to contend with feeling a bit like a museum piece. Much the same goes for the style of “movement” deployed. I’ve never been a big fan of it as a genre, but there can be beautiful, arresting examples. But this isn’t one of them.

However, I suspect that the reason I spent so much time dwelling on nit-picky elements of the design and dramaturgical thinking was because, well, because there’s not so much else to think about. What Stewart calls “undulating” and “ecstatic” or politely glosses as “stately ritualism” I think I might get perilously close to calling “boring”. It’s strange. I used to listen to a lot of Philip Glass at university, and I remember thinking he was dead good. And I think I still have quite a soft spot for Koyaanisqatsi and his take on Bowie’s Low album. But, somewhere along the line either he changed or I did.

I didn’t see Einstein on the Beach last year, and I really wish I had, because that does sound amazing. It also sounds infinitely more challenging in terms of its staging. Here what is a fiercely abstract text and concept is perhaps given a frustratingly literal form. Even if it is in the best style of “alternative theatre” we notice that it is actually plugged into some of the worst excesses of British mimesis.

But then, I also managed to get into being quite annoyed by the thrust of Glass’s “argument”. The piece has three parts. The schema links each to a different figure: Tolstoy – who wrote to Gandhi and inspired him, Gandhi himself, and then it concludes with Martin Luther King. I found this last part the difficult bit to take. It was as if Gandhi’s own life and achievements somehow weren’t quite enough, and could only be perfected by application to an American version. This isn’t the fault of the production at all. This is just sheer irritation at American self-celebration. Nothing happens unless it’s about America, it seems. That this was made in 1980 of course means Glass was unable to anticipate Barack Obama, and I think even this production pre-dates his election, but the recent news has rather served to explain the sense of discomfort that I experienced in the theatre (the night before Mandela died). There is a curious triumphalism about the martyrdoms here of Gandhi and King. As if, in America in 1980, they had anything to be complacent or celebratory about, apart from maybe their baby steps toward becoming some sort of mildly less racist society.

I should say, amongst all this griping there were some moments in the stagecraft which were very pretty. And much more important, that Alan Oke has got possibly one of the most spectacular voices (what a strange choice of adjectives for a voice) that I’ve ever heard: powerful, unforced, pure, and richly resonant. I think I’d happily listen to him sing his bits in concert for hours.

But, on the whole I just kept on feeling troubled by different things. The antique “alternative theatre” vibe, that seemed to have simply submitted to politely flattering the opera’s wealthy patrons and an opera that seemed to offer nothing more than hippy platitudes, content to celebrate the murder of two radical campaigners for social justice as some kind of groovy cosmic balance.

I’m sure there’s a great opera to be written about white oppression and colonialism, but I’d think it might have to be a damn sight angrier and more powerful than this one to succeed. 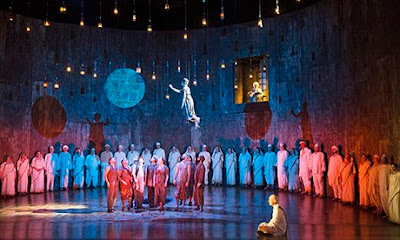