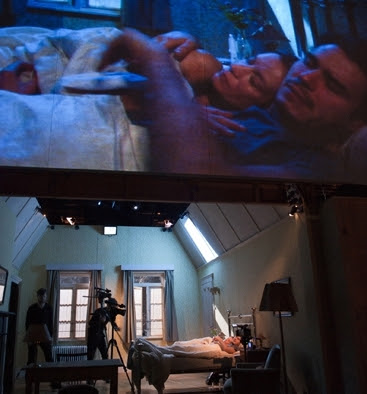 This last of the three Katie Mitchell shows I saw in the past fortnight only serves to underline again what a remarkable talent has been largely lost to Britain, due in large part to the sheer philistinism of the mainstream press, successive governments’ arts funding policies, and perhaps even our largely moronic theatregoing public. Well, mainland Europe has pretty much got her now: the critics love her, better funded theatres offer greater resources, and the work receives the large appreciative public it actually deserves. Perhaps it’s all for the best; the British can grunt and get back to watching funny musicals, the mainland gets one of the best directors in the world largely to itself, and Mitchell gets to make work the way she wants for people who adore it. (The only tiny bright side: getting to Berlin is quicker and cheaper from London than getting to, say, Glasgow.)

What’s also remarkable about Die Gelbe Tapete (The Yellow Wallpaper, after the 1892 American novella by Charlotte Perkins Gilman), is its total difference again from each of the other two (totally different to each other) pieces. Premièred in mid-February this year, it is the most recent of her “camera pieces” for theatre. I am kind of assuming that the majority of readers here will have seen at least one – possibly the Barbican transfer of her first camera show for the Schaubühne, Fräulein Julie, or going back further to her first, Waves, at the National in 2006. Just in case not, let me quickly describe the set-up:

For Die Gelbe Tapete, we the audience are looking at the wide main stage of the Schaubühne divided into three large rooms. The room to our left is viewed through a wide glass window. It is lit with cold, blueish, businesslike strip lighting. In it one woman, unfussily dressed in what are probably her own clothes stands in front of a table, faces a monitor, there are microphones, a sound desk, a computer, etc.

The room to our right starts off completely obscured from view by a black wall. When this is raised into the flies, we see what looks like a tatty store room. Largely empty, except for various flats and screens on castors.

In the central room is an inch-perfect naturalistic replica of a bedroom. A door off upstage left into a hallway and upstage right into a bathroom. There are two curtained windows, a wooden-boarded floor, a bed, a couple of chairs, a desk. The walls are covered in the titular yellow wallpaper.

The first thing that happens is that the cast and crew bring on the cameras. I think there are between three and five. The crew are mostly dressed in black. They set up and the “action” begins. No. Sorry. Before that, possibly before all of that, there’s a (pre-recorded) video projected onto the large screen that hangs above the rooms of a young couple with their baby and a nanny, Tania (Iris Becher).

The young couple (Anna (Judith Engel) and Christoph (Tilman Strauß - Jean in Fräulein Julie)) and nanny from the video are moving into the room. They’re trying to get an annoyingly shaped iron cot-frame out of an unhelpfully solid door. The action is filmed and projected onto the screen above. This live video is pretty much perfect. And it cuts between camera angles as often as a “regular” film would.  It’s not feverishly jump-cut-ty, nor does it compromise in any way. If you just watched the film which plays on the screen above the stage and couldn’t see it was being made live, then you’d be perfectly happy to assume it was a cinema film or TV movie.

All at once, you notice that the sound effects are actually not coming from the room, but are being created by the foley-artist in the left-hand room. And immediately this becomes compelling too. Watching her unwrap a similar bunch of flowers to the one which Christoph has just brought into the room suddenly becomes fascinating as you try to watch the noise being made while watching the thing that is supposedly making the noise.

– there’s an interesting thing: I think part of the excitement of watching is to check for the slippage between these different realities. You can watch just the screen and listen, or you can look at the real flowers (pre-film) being unwrapped, and try to cast your eyes across at the same time to watch the foley artist, Cathlen Gawlich (plainly a genius) doing the noise with her fierce concentration on the live-filmed image she's watching –

At the same time, you can watch the camera operators (the credits are for Andreas Hartmann, Stefan Kessissoglou, but actors who aren’t in shot also take on camera duties, often passing them to each other as they switch from in-front to behind).

Lyndsey Turner’s *version* of the text (translated into German by Gerhild Steinbuch, so I really couldn’t tell you if it’s all an edit of words-from-the-book or an original script) is delivered in a second sound-booth – between the centre and right rooms – by Ursina Lardi with such precision, energy, and expression that it could almost certainly stand alone as an effective, evocative radio play. Similarly, the visual treatment of the story is so clear and detailed that it could easily work as a silent – or rather, wordless – film/or performance (and in my case, probably did to a greater or lesser extent).

On one level, as has been observed by everyone seeing one of these shows for the first time, just the intricacies of this process are enough to keep you happily watching for hours. The seamlessness and the technical achievement going on from minute to minute is just ridiculously satisfying to watch for itself. But this isn’t just a virtuoso display of technique, there’s also a whole tonne of content here.

The Yellow Wallpaper is one of those texts which has taken on an enviable life of its own after publication. I have no idea whether Perkins Gilman intended it as the piece of proto-feminist literature it has become or simply as a psychological thriller about a ghost (and it’s been so long since I read it that I can’t remember how much clue the book gives).

Here, as confirmed by the Schaubühne blurb, Mitchell’s take on the piece suggests a sound basis in the psychological reality of post-natal depression. (In this it forms one of the growing corpus of Mitchell’s work dealing with depression and suicide; from Wunschkonzert, through Pains of Youth, up to Small Hours in 2011 and the forthcoming Wunschloses Unglück in Vienna.) However, this production has its cake and eats it. In the story a woman becomes obsessed with the figure of a woman she thinks she can see behind the pattern and cracks in her yellow wallpaper. I don’t think it’s ever necessarily/entirely clear in the book whether or not she’s right to believe this. Here Mitchell has made the choice to show us what the woman, Anna, sees. (How brilliant, also, that the woman is called Anna.) As such, we are presented at once with both a serious psychological condition and a manifestation of that condition which could at once be either a physical manifestation of a metaphor or an actual stage “ghost”; suggesting that Anna isn’t crazy at all. That there really is something there – in that way like in horror films where no one believes the person who can see the nightmarish figure until it’s too late.

I think there’s something in the slippage between all the modes being used to present the story as well which furthers this ambiguity. That we can effectively be watching every possible explanation *at the same time* – all the while knowing that *everything* is (obviously) just an illusion. But an illusion that speaks to at least one reality.

There’s also something brilliant in the choice of Luise Wolfram as the woman behind the wallpaper. She has a kind of unearthly beauty which renders her just standing there in the corner of the room – or else, standing in the other room, being filmed and projected into the room where Anna is – actually unnerving. The effect of the woman behind the wallpaper is rendered using yet more clever digital video trickery – sometimes so the two women being filmed in different rooms can only meet on the screen above them.

Melanie Wilson and Gareth Fry’s sound design and score adds increasingly to the kind of vertiginous feeling of madness engulfing everything on the stage – even as cool logic can still be seen making the sound effects and using the cameras.

The final moments are shattering and then, just after it’s all stopped, leaving a ringing in your ears, there’s a final cruel, “before” video like the one shown at the start, which suddenly makes the bitterness of the piece all the more profound.

To be honest, I was never a big fan of the novella. This, however, is just about as perfect a piece of theatre as you are likely to see this year (or next, it’s definitely still running in January, and will probably go on well beyond that. Miss Julie from 2010 is still going, after all). 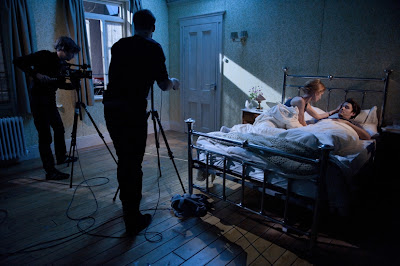 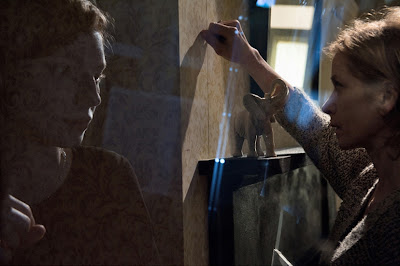 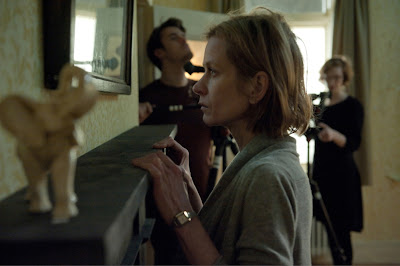 [and that concludes my two weeks in Germany in November 2013]