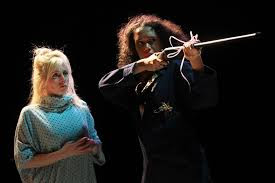 Having recently used Stewart Pringle’s excellent review of Satyagraha to offset the effects of my own much more picky review, for Trout Stanley my real spur to writing is Matt Trueman’s strikingly negative review.

In the spirit of full-disclosure, I should say that I was dead excited to see Trout Stanley as soon as I got back from Germany for a number of reasons. Firstly, the excellent Canadian writer Haley McGee, of Oh My Irma fame, had already told me that reading Trout Stanley when she was 20 was pretty much the reason she wrote ...Irma. Which I loved. Secondly, its excellent Canadian director Matt Steinberg was the assistant on the Lyric Hammersmith’s #ShowOne and #ShowTwo – so a) we’d spent a lot of time hanging out, and b) I really rate him as a theatre-brain and was really intrigued to see what he was going to do. Third: I also think Sinéad Matthews is one of the best, most interesting actors we’ve got working in Britain today. Thought so in Women of Troy, thought so in Lulu and thought so again here (I missed a lot of other things due to living in Berlin). I also know her. (Although didn’t when she was in those first two things.)

So, you might argue I was “a bit too invested” in liking this production. But I think that makes for a really interesting relationship to watching a play. Possibly one much more akin to that of the non-“professional theatregoer”. And, in the case of Trout Stanley it was absolutely the right relationship for me to have watching it.

[actually, I’m not sure these qualifiers really make sense, though. After all, I’d also been told Let The Right One In was great by people I like and trust, and I know Jack, John and Steven to varying extents, so...]

However, even while disagreeing, I can understand where Trueman is coming from. There’s something so disconcertingly alien about Trout Stanley that I imagine my default response could also have been to switch off and be annoyed by it. Lucky for me, then, that I had a bunch of reasons to stick with it and work at it. Because I reckon working at this strikingly original piece of writing is the only real solution.

The reason, I think, that Trout Stanley might be construed as “difficult” here (here being London, England), is partly the range of words that we’ve got available with which to misdiagnose its style. Looking across other reviews, words like “kooky” and “zany” abound. They’re reductive words, and I don’t think they’re accurate either. However, for me, what was difficult, was realising that the play operates something much more alien – an unwavering streak of total sincerity. This is difficult for any Englishman to understand. There’s something in the style of the writing that makes us expect it to be being “ironic”. In fact, I don’t think it’s being ironic at all. As such, the default British understanding of what the play might be setting out to achieve is already all at sea. I think we start out looking at it wrong, and then, given that we’re an irritable lot, might just get cross at it for not even delivering what we (wrongly) think it’s set out to deliver.

None of this is, I think, the fault of the production. In fact, I think what might have further made reading the play and tone tricky for reviewers (people with a much more urgent need to pin a thing down than the “casual observer” – as if any theatregoer is really casual – so, rather, the sympathetic reader) is that Steinberg and cast have gotten the tone of the thing so absolutely right. And in getting it right – in playing it totally straight, and inhabiting the characters with every ounce of conviction in their bodies – they make this audacious lack of irony potentially even more unseeable.

What Canadian playwright Claudia Dey’s play does, then, is to show us these two women, the surviving twins of triplets, on the eve of their thirtieth birthday, whose whole world and relationship are a study in finely crafted, totally idiosyncrasy. The scale of linguistic invention here – as with Oh My Irma – is kinda mind-blowing. Rather than leave any sentence, or rather, line of dialogue, to the crude machinations of “how people speak”, Dey has pretty much spiked and polished every carefully chosen word until the whole fairly glistens. Played at some pace by Steinberg’s cast, you find yourself hanging on for dear life as wit and wordplay whizz past your ears with such a speed that daring to laugh will surely rob you of a follow-up piece of brilliance. But there’s something almost loving about this degree of embellishment: like a sort of non-stop banquet that you’ve unwittingly entered. Plays really aren’t normally like this, after all. (cf. that recent Guardian article arguing that operas (and later, plays) need boring bits.) Which is another reason to watch all the harder. There’s also the fact of the imagination at work here. If we get rid of annoying pigeonholes like “kooky”, then actually what you’re looking at is a staggering level of imagination and playfulness. cracked, gothic and grandiose – all intended as compliments.

And then there’s the cast: Matthews, Vinette Robinson and Dylan Smith are – put bluntly – about the sexiest cast on the London stage. That wants *a lot* of qualification. Can we just understand that I’m not talking about “magazine sexy”, but actual, credible sexy-in-the-world-of-the-play?  Thanks.  When the ridiculously named titular hero burst into the sisters’ lives – or, rather, interrupts the heart-breaking suicide attempt of the younger twin, Sugar – and immediately falls flat-out in love with her, there is a violence to the passion between them that is totally, ludicrously tangible.

Steinberg’s production is also genius. And the sort of genius that also takes working out. On the face of it, Shizuka Hariu’s set is kinda plain, but then you notice that it is at once perfectly detailed where it needs to be (the light comes on in the fringe, the sink unit is perfectly populated), but at the same time, this impressionist blank-walled wooden expanse that allows our imaginations to wander as the characters detail the fantastical landscapes of their minds.

There’s a remarkable interview with Dey, which I put off reading until getting this far in the review – I daresay her public persona would already be common knowledge in Canada much as, say, Caryl Churchill’s politics are here – but in a way in this seven-year-old preview of the play’s première sheds about as much useful light on the thinking behind it as I could usefully guess or report from looking at it:


“Before I started writing this play, I was in this period in my life where I’d go to the Vienna Home Bakery, and the man would say, ‘Have a good day,’ and I'd say, ‘You too.’ And honestly what was going through my mind was, ‘I love you.’ This kept creeping up, strangers in different situations. I was going through this world like this little lighted creature, and that was the beginning of Sugar.

“Life ruptures and reconfigures itself, and often in a much more truthful form,” she says. “That’s the life I'm interested in. It’s that world of unpredictability, where you just see someone and you're blown away. I think that only happens if you're awake to it’.”

It’s about the least British way of thinking imaginable, but there’s something quite startling and spectacular about it, and, if you look hard enough, I think you can see it shining out of this play, and this astonishing production too.

[Edit: after posting this, it occurred to me what the biggest thing that wrong-foots about the play is: effectively, it’s a genre piece in which the man comes to the house where the two sisters live after they hear that a murderer is on the loose. And what happens is, he turns out not to be the murderer. The “twist” is that there is no twist. The twist is that he’s completely honest.