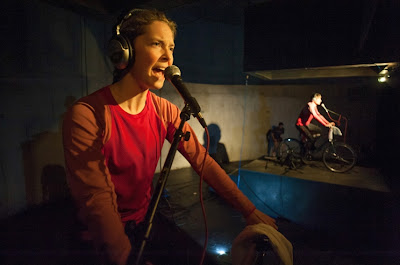 In my review of the UK première of Duncan Macmillan’s Lungs, I suggested: “It is interesting to consider Lungs in the light of Katie Mitchell’s Ten Billion, which I don't think has had nearly enough praise for the game-raiser it is as regards theatre's dialogue with the impending global catastrophe that is climate change”.

The German-language première of Lungs (Atmen) is directed by Katie Mitchell and it also makes precisely this connection. It also presents one of the most elegant syntheses of Anglo- and German theatre thinking that I’ve ever seen, marrying British new writing with German conceptual staging in about as evocative way as is possible to imagine.

If you didn’t see Lungs on tour here (or in one of its US versions), or catch the version on Radio 3, it’s a two-hander about a couple which starts with the man asking the woman if she wants to have a baby. Scenes cut into scenes, time and place jump forward, but throughout it’s just a couple carrying on a conversation. They agonise over whether it is responsible to have a child, adding to the world’s ballooning population. They worry about the possible future their putative child will have. She gets pregnant. They have to adjust their expectations and habits. Then she miscarries and they are devastated. They break up. They get back together. She is pregnant. They have a child. Then – briefly at the end, In a bit I don’t remember *at all* from the original production – they get old and die.

It’s small, bittersweet, thoughtful, truthful, insightful and probably quite harrowing for anyone without children.

The central conceit of Mitchell’s production is that both the actors are on bikes. Placed on top of Chloe Lamford’s beautifully designed, functional charcoal plinths, with a further “plinth” hanging empty above them, recalling, variously: Rachel Whiteread’s Fourth Plinth design, the original set for Thomas Ostermeier’s staging of Crave, and perhaps the greyscale version of those blocky equal marriage symbols everyone had as Facebook profile pics for a while.

The reason they’re on bikes is that the entire show is run on electricity generated in the room during the show. As a result, there are also four other cyclists ranged round the shallow concrete cyclorama, pedalling throughout. The performers control their own lights, the others I think the sound, sound desk and video projection (the sound design by Ben and Max Ringham – the whirring wheels of the bikes amplified, is superb). It is breathtakingly simple brilliance. *Of course* they’re on bikes. *Of course*. What better way to remind us continually of the world and the anxieties they’re talking about. The video projection shows one of those clocks which shows the world’s population increasing. Over the course of the show, it has gone up by well over 10,000. The show is a bit longer than an hour.

What’s lovely about the concept, however, is that beyond this eco-purpose, it also feeds back brilliantly into other aspects of the play. At one point I found myself noticing how apt it felt that they were getting absolutely nowhere no matter how hard they cycled, which felt like another possible critique of the play’s wider theme of life under capitalism: the protagonists are set on this on possible course and they never quite think to get off, or change anything. They just keep pedalling to keep the lights on.

Then there was also the effect that the cycling had on their performances. The performances – by Lucy Wirth (last seen by me in Die bitteren Tränen der Petra von Kant) and Christoph Gawenda – are both excellent, btw.

But it’s fascinating to see Wirth, much more than Gawenda, seeming to find it tough going (of course, this could also be acting); her lights dimming more often, as the physical demands of the piece make themselves felt. Neatly, this also lend her character a kind of vulnerability which the character’s external toughness and cleverness refuse.

I’m not exactly sure how I’d describe the performances or where I’d situate them, in terms of national theatre cultures. They both emote far, far less than any British actor would, faced with the same emotional journey. But then so would any German. And the language lends itself to emoting less. There’s a plainness and a directness to it, instead of being this fabric of ums and ahs and “tact” and intonation with which English communicate. But there is a truthfulness and a concentration to the performances. And that is the crucial thing. You find yourself convinced by the truth of what they’re saying, which is interesting, since actually, in the play, the characters are sometimes lying to each other, or at last being evasive or unsure.

I did find myself wondering how much of Duncan’s script, just in terms of the way the two spoke to each other, might come across as sheer science-fiction – all the locations have been swapped for roughly equivalent German ones, so this is now definitely a play about two Germans, not two Germans performing a play about an English couple. (And, talking to the Nachtkritik editor afterwards, possibly reflects a way of thinking more common in Britain than here – perhaps in large part because of the also catastrophic cost of bringing up a child in London compared to Berlin.) Actually, it *feels*, in the room, at the time, like it is being listened to and felt with remarkable attention. For a very funny play (in English), I was also reminded again how nice it is to watch plays with people who don’t feel the need to laugh loudly at every single joke to signal approval. Smiling is an acceptable substitute in Deutschland and it interestingly makes for a much more pleasant atmosphere.

By any measure, though, national or international, this is a splendid production of this excellent chamber play. And it’s one which a) will be in rep for some time, I suspect, and b) it’s not one which it would be impossible to imagine happening here. So if you’re after an idea of what Germany makes possible that perhaps England makes difficult, then this might be a good place to start. You can find the script easily enough in English, I imagine, or find the radio version online, and then marvel at the way that an elegantly conceived concept doesn’t *interfere* with a play, but simply just compliments it beautifully, adding additional layers and amplifications to an already rich texture.
Posted by Andrew Haydon at 19:33