[written for Exeunt, although the writing is a bit meh, if I'm honest] 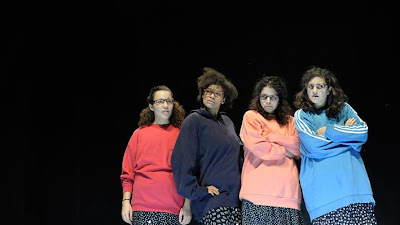 If anyone had any lingering doubts about whether Sebastian Nübling is a misogynist or not, this show ought to pretty much remove all trace. The text is by Sibylle Berg, the hardcore German feminist, novelist (of whom we have (un)surprisingly little in translation over here), Spiegel columnist and theatre type. And the staging, well, the staging is four women (possibly graduates of the Junges Theater in Basel) of various races and appearances, all dressed roughly the same as the single-voice narrator. They perform her in chorus (pretty much perfectly) as duets and in solos. At the same time, they own the stage with movement created by choreographer Tabea Martin.

The text itself (shown here with surtitles in line with the Gorki’s “inclusion” policy of surtitling all home-grown shows in English – I’m not sure of the extent to which the JTB is involved as this is definitely a Gorki production – how amazing) tells the narrator’s-eye-view story of a girl-gang member who used to go out beating up men, who gradually drifts away from her gang, into more mainstream society, and generally despairs about the state of the world.

The style of the text is emphatically German, however. I was incredibly surprised by the reaction of the audience with whom I saw the piece on Friday night, who responded as if they’d seen a really angry, searing piece of social realism. I suppose, in theory, they had. But this felt like a real cultural gap for me (although my (German, theatre-agnostic, though perhaps a bit Anglophile, feminist) friend was also non-plussed by the cheering that happened alongside the inevitable year of applause.).

But, discussing the show the next night with Nachtkritik editor Anne Peter she, like Nachtkritik’s reviewer (who wrote: [Google-Translated] “Why is this such a way that a kick in the auditorium of sweat on the forehead, vibrate the muscles, the pulse races, as if someone had just driven himself seventy-five minutes high performance sport, at least to Fight Cup level?
Because these four furious chorus speakers make up there on the boards relentlessly pace, driving beat and hook not only play themselves into a frenzy, but also the floor above which the hall light has been started.
It’s out the tirade of a young woman from our own four walls, against the eroding female “role models”, in the political, erotic, consumer-economic, digital, artistic, whatever promise of happiness, against almost anything and almost everything. Switch via Skype, text messages and phone in close timing her friends, her half-sister, her mother, it without that they would gain presence. There is only a brief bucking in the monologue of the protagonist, then resting on the discourse Ticker. Such is life 2.0: manic, hyper reflects virtually.”), suggested that the piece itself exerted a real sense of physical, tangible rage.

I confess, sat not so far from the stage, I didn’t really feel it. I read it. And granted, reading something with the voice in your head while some people talk in a foreign language which, because you’re reading, you’ve stopped trying to understand, is a bit of a secondary experience. But I don’t think it was this that was the problem for me. I wonder, a bit, if it was that there was something about the general culture here that you can be told a thing in stark terms and you take that thing seriously as a result. Just as a result of the being told. Whereas in Britain actors might tend to bend over backwards and shout themselves hoarse to prove it to you physically, because of the way that the British tend to treat language generally – as a medium for wit or diplomacy (or “lying” as a German ex- had it), yes; as a tool for ernst or echt-ness, not so much. I wondered, in short, if me not really feeling it was more a consequence of not feeling German stage conventions keenly enough for them to have a real emotional impact on me. For everyone else in the room, it was apparently like watching Credible Likeable Superstar Role-model. (And I wonder whether they’d conversely have found BK’s CLSR a bit needy and demonstrative, what with all the nearly actually crying and so on...).

It’s tricky. Because I don’t want to pass any kind of definitive judgement here. I can only say what I felt and what I thought. And I don’t believe in fudging the issue with a kind of halfway house synthesis of what I was meant to think or feel, or how I imagine I might have felt if I was someone else and passing that off as “a review”. So all I can do is relate as carefully as possible what I actually did feel and let people try to pick out of that what they find relatable.

So, yes. There was demonstrable talent. But partly I suppose I was also missing (again) Nübling’s more epic production style. I suppose this I also unfair of me. To see two things by a director (Pornographie and Three Kingdoms) and to want everything else he does to do something similar. And that style wouldn’t have necessarily suited Es sagt mir nichts... anyway. So, yes. I was probably the wrong person for this show much more than there being anything wrong with the show per se. If other reviews and colleagues are anything to go by, this was pretty searing stuff. But I didn’t feel any of it. Or especially find the half-narrative/half-analysis especially convincing. I did spend a lot of time noticing national differences in the way the story was told however. I wonder if that is another dimension which distracted me – an unacknowledged wedded-ness to the national style of storytelling of the country of my birth – although I’d again say not, part due to my German friend, unprompted, saying much the same things that I was worrying about, and part due to the fact that it doesn’t work as a truism across the board.

So ultimately I’m not sure why me and Es sagt mir nichts... didn’t click, but we didn’t. 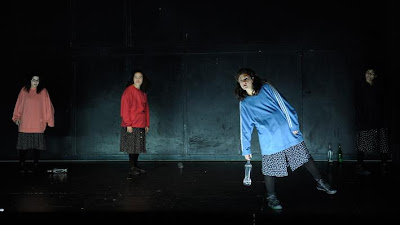 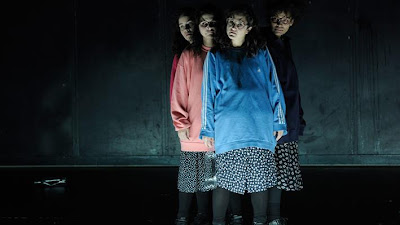 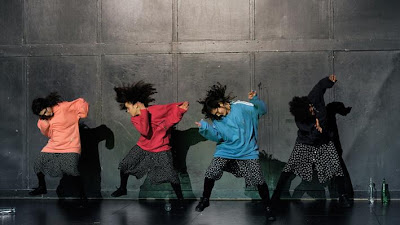