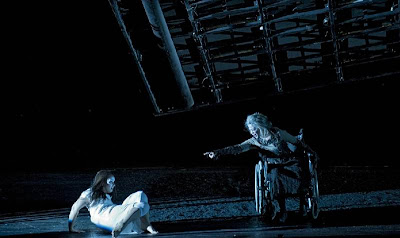 And, yes, Simon McBurney’s replacement production does at the very least have the advantage of looking like 21st century theatre. Unexpectedly, the theatre of the 21st century turns out to be a kind of whizzy blend of Katie Mitchell and, less surprisingly, Complicité.

It starts beautifully. The large black stage, empty save for a kind of suspended platform, is suddenly obscured by a large, lowering cinema screen. Onto this is projected a live feed of a small blackboard, the “real” version of which we can see to the side of the stage. All that happens during the overture is that a hand writes the name of the opera, the name of the composer, and the year it was composed on the board, rubbing each out before starting on the next. But he does this more or less in time with the music. And slightly hesitantly. The effect is, well, delightful and funny, actually. Not maybe the world’s most brilliant joke, but it feels like precisely the sort of level of wit and modernity to makes perfect sense of Mozart’s own skittish intro. It’s also strangely reminiscent of the title sequence from Peter Greenaway’s The Draughtsman’s Contract.

If only there could have been more lightnesses of touch like this.

As soon as the opera starts, so does a good deal more clodhopping. Ok, I’m being tough. There is still an infinite amount to be grateful for here. From the unfussy use of modern dress (and: another nice touch – the three lady attendants to the Queen of the Night, who rescue Tamino from the video of a snake, take cell-phone snaps of his prone form) to the agile use of a near empty stage supplemented only with live-feed video backdrops and the raising and lowering of the platform, it confirms – as with Master and Margarita – that “Complicite” have got a lot better at technology again, post-A Disappointing Number.

It’s interesting coming back to opera after being in Germany and seeing David Marton’s Das Schottenstück. Konzert für Macbeth, which in turn reminded me of his Heimkehr des Odysseus. It made me think about how, when watching the work of theatre directors doing opera, what you can be struck by is what feels like their relative powerlessness.

On one hand, McBurney has been brilliant by raising the orchestra up out of its pit so that they’re a fully functional and visible part of proceedings. This is excellent. He also gets the lead flautist out of her seat and on stage to play the flute parts a couple of times. Such a better solution than having her stuck invisibly in the pit with on-stage Tamino miming like a dick. At the same time, while the score remains the same and while the orchestration stays inflexible, there is an inexorability about the unfolding of the drama that McBurney struggles with and ultimately loses against.

The main problem might be the plot. It’s so flimsy yet reactionary. Having singers even just walking about and representing the characters is just hell really. And then there’s the misogyny. It was bad enough (a lot worse, actually) in Hytner’s production, which pretty much played it to the gallery as comedy. But trying to ignore it, gloss over it, and pretending it isn’t there really doesn’t work either. I honestly don’t know what one does with the fact that a load of the “great men of artistic history” degrade women in their work. Banning it outright seems extreme, but pretending it’s fine plainly doesn’t work. The Mitchell solution of hardcore feminist interventions and reinterpretations seems ever more like the best possible course of action currently being created, and I’m sure there must be other possibilities, but just “serving the chauvinist text” really should be shot down every time someone does it until it stops.

[“Comedy northern accents” such as Papageno’s (for all I know it’s also Roland Wood’s real accent, and he’s an allegedly comic character, so fair enough, but...) might also want to be phased out. TBH, it was actually quite nice to hear a northern accent on stage at the ENO, it was just the character’s rapid descent into clowning and oafishness which rather let it down. Oh, and, re: putting the Queen of the Night in a wheelchair? Um. I think there’s a big old argument that says NO to that... (No, I don’t think Cornelia Götz needs it as she gets out of it several times and walks around. It does just *seem* to be a prop. Sincere apologies if this isn’t the case)]

It’s strange: if I had been told *this* was ENO’s 25-year-old production about to retire I wouldn’t have actually been surprised (apart from the live-feed video stuff. That would have been beyond impressive for 1989); and I’d have thought it was a shame that such a lovely production which had pretty much stood the test of time was being retired. This is how mainstream theatre should have been looking for well over two decades now. That this is the *new* production is a bit of a pity. It’s good, it’s well made, but it really lacks any sense of a progressive dramaturgy. There’s precious little energy and no critique of anything. That also means the weirdly dangerous masonic hymn to the enlightenment – in which you can virtually hear the train tracks to Auschwitz being begun – just gets played straight by a bunch of men in sober grey suits. Which feels pretty chilling.

Stephen Jeffreys’s translation of both sing and spiel oddly opts to bring out as many parallels with The Tempest as humanly possible, to the extent that Sarastro evens comes out with: “This thing of darkness I acknowledge mine” at one point. (Hang on, do you want me to explain the plot? In short, it’s a bit like the Tempest, but not really at all.) And rather than Jeremy Sams’s light, witty English version (far and away the best thing in Hytner’s production), Jeffreys aims mainly for a translation in which repetition of key elemental words such as “steel” perhaps aim for a darker version of the text. I’m not convinced it fully works, but the legible attempt is there and clearly thoughtful.

Overall, then: this is a solid production. One which I’d very much have liked to love a lot more than I did. It seems to owe a vast debt to Katie Mitchell’s pioneering work, both visually and sonically (the other artists credited in the production reads like a round-up of past Mitchell collaborators with Finn Ross (Die Ringe des Saturn, Köln) on video, Gareth Fry (oh, lots) on Sound design and even Ruth“-in-the-booth” Sullivan (Die Gelbe Tapete) doing foley), but where Mitchell also offers feminist rigour, McBurney has, it feels, substituted a slightly woolly technological romanticism. I imagine for a lot of people it will feel perfectly, bracingly modern, and maybe I’m just an old grump, but I want the feminism and rigour back too. 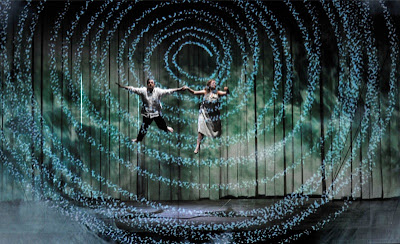 (this is a chalk drawing live-feed-projected onto a screen in front of two performers floating mid-air on wires in front of a recorded-video backdrop. Pretty.)
Posted by Andrew Haydon at 17:05