Forest Fringe at the Gate – 11 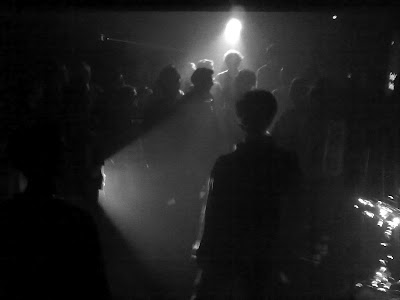 Well, here's an interesting problem. I'm back in the small dressing room of the Gate Theatre about to write up Deborah Pearson's show The Future, having already written most of my Sam Halmarack review last night, so, if I type quickly, I can have the review of tonight's show up online before it's even finished.

Happily, this conundrum so neatly reflects the way that Pearson's piece works it's worth doing just as a form-follows-function postmodern joke...


What The Future is, then, is Pearson sitting down on the stage of, in this instance, the Gate and telling us what's going to happen starting twenty minutes in the future.

It starts with her telling us the final three lines of her show. She then describes how we're going to clap. Even if some of us were bored. She then gently outlines Dan's show 30 Cecil Street, which, being a co-founder and -director of Forest Fringe, she'll have already seen last year, so no great act of clairvoyance there.

She then moves to describing the interval. And, oddly, I'm in this bit (I presume me). She says: “I will say hello to a friend who is blogging about tonight, and we will skirt round that subject”. She's wrong, actually. I really liked the piece and will have already written the review and I will tell her so. But, in a funny way, that will now be partly to do with the way that the show does feel like a bet with the future.

She mentions Andy Field giving her a big hug and mocking her new haircut. I'm sure he'll also go out of his way not to do so now.

It's after this bit that the show starts to get more, well, more sustainable. Because so far, while speculative, everything she's described has a pretty sound basis, if not in *fact* then in *likelihood*.

Beyond the interval, however, Pearson tells us that she has to leave because she's doubled booked herself – she's telling us essentially that she already failed in the past to properly order the future.

She has to go somewhere else.

Where and what is left ambiguous for a while. She goes down to the Circle Line platform of Notting Hill Gate station and waits for an East Bound train.

(I'm interested to note that I am now writing about these events in the ast, since she has now told *us* about them, even though, even as I am writing *now* these events remain in the future.)

She tells us about how she feels dead when she's underground and thinks about whether she always feels that way. And wonders whether, conversely, she feels *more alive* the higher up she is. She wonders if this is why she cries most at films on aeroplanes.

It transpires she is going to the wedding of an ex-boyfriend from when she was 19. Her fiancé is his Best Man.

Now, this is the bit where I have no idea whether it's true or not.

If it is all completely true, then to my mind this show either a ) has a very short shelf life indeed, b) will never be “true” again, or c) will involve an awful lot of work before any future showings, where Pearson will have to describe whatever she's *actually* likely to be doing after each and every time she performs it.

I've no idea if it's true or not, but I like the fact that something that's already doing something unlikely – i.e. purporting to describe the future – still has the ability to make me worry about “truth”. That's very odd and very clever.

It's also a canny way of being able to describe the way people perhaps live. Like we can already anticipate so much of the future, just by knowing what our plans are, where we're going, how our friends behave. But there's interesting slippage too. At one point Pearson tells us she's never been to the place that the reception is being held. Later she describes the pictures of “Hollywood stars on the walls”. I only noticed that example just now when thinking about this section of the show.

As well as possibly telling us something about Pearson and her relationships, the piece also does a pretty damn good job of making us (well, me) think about the weddings of friends, the way that the past acts on the present, and also how little we really do know about the future.

I should also record in passing that Pearson is a lovely, engaging presence on stage, and has a gorgeous soft Canadian (it is Canadian, right?) accent...

[I sit out Dan Canham again to write the all of the above. They're now clapping next door, so I'm going to post this now. The below was written after seeing last night's show of Sam Halmarack and Miserablites this afternoon. I hope it still describes what I'm now about to watch...]

So, how best to write about Sam Halmarack and Miserablites?

(It's possibly worth noting that it's the first piece that has also made me want to write a “proper” review so they can use it commercially and stick it on the back of flyers and stuff... I might yet do that too)

This is their programme blurb:

“Sam Halmarack and Miserablites are the bombastic pioneers of interactive stadium pop. Get ready for handclapping anthems and electro music to move and inspire. With songs and stories and a little help from you we will all come together to offer a unique take on what it means to be redeemed by music.”

Anything more I say about the show will start letting the cat out of the proverbial bag.

On the other hand, it's pretty much impossible to write analysis of a secret.

So, uh, SPOILER WARNING: THE REST OF THIS REVIEW IS SORT OF "SPOILER"

So, the shtick here is that it's a one-man character comedy show about what happens when Sam Halmarack's band don't turn up.

From this fairly unremarkable premise, performer Sam Halmarack (it's also his real name) manages to wring a show of incredible intelligence, poignancy and wit.
There's also a reason I don't write about comedy very often. In fairness to this show, it feels slightly “reductive” to label it as “comedy”. At the same time, that seems to suggest that “comedy” isn't capable of *saying something* or *being poignant*, when plainly it can. The reason I don't write about comedy, however, is that serious analysis applied to comedy looks *even more preposterous* than a lot of people think it already is when applied to stuff that seems to invite it.

What I think is brilliant about this show is the number of levels it operates at. Firstly, there's the totally available primary level in which we gradually learn how quite a lonely guy has been let down by people. At this level, is a bit like, say, The Office (Halmarack is probably a bit sick of being compared to Mackenzie Crook, but, well, let's say there's a passing resemblance that gets emphasised by the character he's playing here): a comedy of disappointment, almost an invitation to find someone else's heartbreak funny. So, y'know, The Office. Or Chekhov.
The second level, however, is perhaps the one that interested me more, since as well as this character comedy, SHM also presents a *really good* analysis of pop music's uninterrogated totalitarian leanings. Ok, that's maybe overselling it slightly, and one could definitely argue that this is just another level of the character-comedy – the central character's tragic lack of awareness that he's writing songs that basically rely heavily on Nietzsche and Triumph of the Will. And I suppose it also stems from having seen Laibach last weekend (review still forthcoming).

Although Halmarack's strategy is the exact opposite to Laibach's – rather than taking extant material and dressing it up with uniforms and German, what Halmarack does is to dress up new songs with eighties synths and a Shoreditch hipster/twat uniform and let the lyrics speak for themselves.
As a result, the third level is the most interesting – the fact that undernearth all this, I also strangely found it very moving indeed. Which I wasn't expecting.

Yes, part of this comes from the character's pathos – and the fact the character is, at times, unsympathetic is clever and interesting; like The Office in you're being made to feel sorry for someone who is at the same time alienating you – but another part of it comes from the problematic songs themselves. Since, along with pointing to pop's long history of questionable sentiments, at the same time the songs also do an incredible job of articulating what Britain feels like at the moment.

This is Austerity Britain – The Musical! It is every bit as much a show about the poor being oppressed as it is about a guy trying to get his music heard. The central, heartbreaking question of the night is “When do you give up?” And, it's own little way, even with the difficulty and the crunchy textures, it makes a pretty strong case for “never”.

It's also perhaps significant that this is the first show that invites the whole audience onto the stage.

It's interesting to note that this also has the effect of making it feel like the most “Forest Fringe”y show of the whole fortnight. (I acknowledge that since I've already argued that FF shouldn't be solely defined by its erstwhile Edinburgh home, what I really mean here is “It's most like shows at Forest in Edinburgh used to be”).

The effect this has on the show, however, is to transform this lone artist and his “character comedy” into something which we really are *all in together*. And I think it's this fact, the fact that Halmarack actually *needs us* to take part for the piece to work, that adds to this ultimate aticulation of resistance.
Since I'm being ludicrously honest in these reviews, I should probably also admit/confess I didn't get on stage. I sat in the stalls and watched. But as I've often noted, I'm not a big joiner. Come the revolution I'll probably be sitting at the side of one of the barricades writing about it.

[Will tidy up this second review tomorrow]
Posted by Andrew Haydon at 21:23

It's weird how Deborah's piece on the future seemed to engage with the past so much. And how, by predicting these moments in the future, she managed to create some sort of nostalgia to me as a spectator, probably because by saying these things she made them register as "past". (So, perhaps a predictable future can be a quite nostalgic thing.)What this piece did too was to make us alert of time. To notice time.