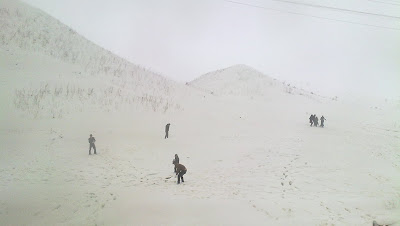 The last couple of weeks, it feels like it's been a really exciting time to be writing about theatre again. Since writing Embedded:

Dan Bye wrote a response: Embedded Criticism: some Arguments, an Offer and a Dare.

Then Maddy Costa, wrote A Space of Dignity, Horizontality and Love, introducing...

Then Catherine Love, inspired by Jake's Autobiographer Reconsidered, wrote Reviewing Reviewed: An Attempt to be Honest.

There was a nice namecheck for embedded at Exeunt

This morning, Culturebot, wrote up much of the above along with detailing their own processes over in the United States.

And there's definitely something of this new spirit detectable in Matt Trueman's staggeringly good review of Chris Goode's 9.

There also seemed to be rogue moments of embedded-ness in-the-wild (I'm using 'wild' here in its original sense of *actual “proper” journalism*). First up, Herald critic Neil Cooper wrote about actually *performing* in a show at the Traverse, and then young FT journalist and critic, Richard Dennis (a colleague of mine from NSDF), wrote an article which made extensive use of, well, basically all his university friends who are now working in theatre, for a feature about Young People's schemes in theatres.

Both Dennis and Cooper's pieces (I've only just noticed they're called Dennis & Cooper. Emphatically not to be confused with Dennis Cooper) demonstrate some of what I think I might have been getting at in my initial piece. What the pieces do is either get involved in something, making available a unique perspective on the experience of performing (Cooper), or, by mining that most in-depth of knowledges – the experience of living through your close friends' successes and set-backs – for insights into how the theatre industry treats young people (Dennis).

I should also firmly underline before continuing that much of what I wrote in Embedded was directly informed by pieces by *proper* critics.

Particularly, Charles Spencer's thoughtful piece about going too far, (at least, I remember it as thoughtful, am now going to find the link and read it again...)

and Lyn Gardner and Michael Billington's blogs on whether critics and performers can be friends – “No” and “Yes” respectively (both definitely worth a read in the light of the current climate).

Also, Irving Wardle's discussion of the subject and also his description of attending rehearsals with the RSC in his (essential) book Theatre Criticism (actually, I've not read that in a while, but it strikes me I've probably unconsciously strip-mined that chapter/section, both as an ethical guide and as a concept).

But it's also been informed by a load of other stuff: thinking about the critics I've met and the various relationships they adopted toward performers, writers, directors, etc.; thinking about the points or places where the “traditional” (British) models of criticism collapse. Lots of things...

To be honest, I've been thinking about what I meant by the first piece, what I really wanted to say with it, and the possible drawbacks/counter-arguments to what I did say ever since I wrote it.

And doubtless at some point in the future I'll probably adopt some of those counter-positions against my original ideas. Because I'm like that. But also, because I think that's a good way to be. There's no point just finding a position and sticking to it without constantly interrogating and reappraising it.

I certainly hope I'm not still saying the same things I was saying five years ago, although this piece and this piece (scroll down to "My Famous Friends") from soon after I started Postcards... in 2007 do seem to reveal some similar preoccupations about seeing work made by friends. Although I'm interested by the differences of my perspective then with my perspective now.

Perhaps the thought that struck me most forcibly, though, was the fact that I essentially came to criticism though an “embedded” organisation: Noises Off, the idiosyncratic, photocopied daily magazine/fanzine/reviewspaper of the National Student Drama Festival. I must have written about my time at/debt to/love of Noises Off hundreds of times on this blog, but I'd never really stopped to consider its specific character before.

In short, Noises Off is a magazine that, for all the time I've known it (1997 – present), has at once practised and supported what could be defined as the “core values” of theatre criticism (perhaps best set out in Wardle's Theatre Criticism), and at the same time explored different models of writing about performance – all the while being funded solely by the the Festival about which it is writing. And yet with complete editorial freedom.

What's also interesting to me is that Noises Off can be *a training* as much as it is a magazine. The rigours of having to turn out daily reviews, the desire to make those reviews, or comment pieces as attention-grabbing and readable as possible – but perhaps most usefully of all for a critic starting out – actually getting to see people *reading* what you've written. And being able to discuss it with them immediately.

Obviously that doesn't happen to critics in real life very often. But, in a funny way, it's the thing that has always made reviewing for Noises Off feel far more important, engaged and engaging than almost anything I ever wrote that might have had a larger readership (ok, my review of Rupert Goold's King Lear might be an exception).

At NSDF, conversely, you could believe that your review was part of a conversation, not because that's the theory but because it was an observable actuality. You would file your copy (and then hang about the Noises Off office (Noffice) helping with layout, proofreading and stapling all through the night), and then in a discussion the next day some affronted or delighted company member would be sitting in the auditorium of the Stephen Joseph Theatre jabbing at your article in their already dog-earred copy of that day's copy with a livid or joyful finger, depending on what you'd written.

As I've remarked before, Noises Off *invented* “User Generated Content” in 1965 and hasn't changed much since. Which is perhaps why I found the early days of the British theatre blogosphere so exciting (and I'm definitely going over old ground I've written about before here). It felt in 2006 and 2007 was like a *virtual* version of that atmosphere; you wrote an blog, and then someone else, who you might not have ever met, possibly on the other side of the world, x2, or across the Atlantic, would write something about what you'd written.

This even had an advantage over NSDF in that it *wasn't* spatially or temporarily specific. Someone thousands of miles away could pick up on your point weeks later. Obviously, this also feeds into the conversation about the advantages of everyone being in the same place at the same time versus the possibilities of a “global” “community” made possible by the internet.

Anyway, I'm moving slightly away from the “embeddedness” point. Part of what was exciting about the early years of the theatre blogosphere was that playwrights like David Eldridge, Chris Goode, Fin Kennedy and Bens Yeoh & Musgrave also wrote blogs. So not only were “critics” able to open up their practice a bit more, and muse publicly on things wot thry thought, bu there was also the possibility of a written dialogue. Perhaps this is one of the starting points of “horizontality”.

Tomorrow, I'd like to open this discussion further, by looking at some already running models and examples of the sorts of “embeddedness” or “horizontality” of which I might, in part, be thinking.

[Edit: I *say* tomorrow, but frankly, I should write a couple of reviews first...]
Posted by Andrew Haydon at 23:47