Forest Fringe at the Gate – 7 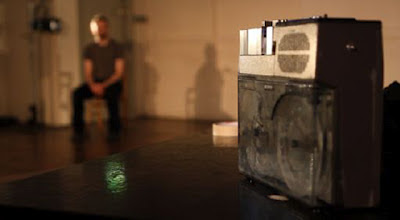 Having banged on about “embeddedness” at some length yesterday, it's perhaps worth noting that I didn't know a single person who presented work last night (Night 7) of Forest Fringe at the Gate (FF@TG).

Week two of FF@TG is being curated by the dancer and theatre-maker Dan Canham. He is performing his big Edinburgh Fringe hit 30 Cecil Street every night, and has lined up an intriguing supporting programme of both Forest Fringe artists and other artists.

Last night's line-up was admirably eclectic: essentially a film, a dance and a band. No actual “theatre” dramatic or postdramatic anywhere to be seen. Which was interesting. It also sort of presents another issue. I'm quite happy spouting my opinions on theatre/performance, largely onn the basis that I've seen quite a lot of it and reckon I've got a reasonably good grasp of the coordinates. I'm very far from an expert on documentary films, contemporary dance or any sort of music, so apologies in advance to all those reviewed below; there are people more qualified to assess your work than I.

Still, this is part of the fun of this fortnight of Forest Fringe, we're all trying new stuff out. Tonight, Matthew, I'm going to be trying out writing about stuff that I don't know how to write about... :-)


Interestingly, last night' programme was, in many ways, a lot more oblique than more or less anything shown in the first week (with the possible exception of #TORYCORE™)

Instead of having an overt thesis or narrative, Hammer... simply pointed a camera at a series of vignettes and, well, *documented* them. The result is remarkably attractive and stylish. The subject of the film is the Irish town of Limerick and some of its inhabitants.

It's interesting that the less overt editorialising there is – there's no voiceover, no one explaining what's going on, or why we're being shown *this* scene, not something else – the more I found myself thinking about it. How much more material had been shot but not used? Were the folk shown in the film typical of the people of Limerick, or had they been picked for being especially idiosyncratic? What were their relationships to the film-maker? Was the film trying to show us what Limerick is *really like*, or demonstrating its capacity for almost Lynch-like oddness?

In a way, though, by the end, it didn't feel as if these questions were especially pressing. The film had a more ambient, meandering quality than that.

What's most striking about the film is that the camera basically never moves. In a couple of scenes, it may very slowly pan up slightly, but normally it is completely fixed. Which makes for a really interesting effect. It's reminiscent of the early documentary films of Peter Greenaway, but also of the way that we watch theatre. It is odd enough to sit in a venue where you're accustomed to have living performers in the same room as you and watch a film. It is even odder when that film turns out to have a few unexpected theatrical properties.

Perhaps it was because I was watching in a theatre context, but oddly, another reference point I'd use to explain the film, or rather, something that the film suggested to me, was a really vivid picture of the sort of worlds created by Samuel Beckett. In one scene, the first, but returned to several times over the course of the film, a man sits absolutely motionless in a chair watching a printing machine running. It is only when he moves, that you're sure that you're not just watching a film of a still photo. Elsewhere, a man sits on his sofa playing with his dog, while his wife sits next to him, apparently completely oblivious to both him and the camera just knitting silently and intently.

The other major/useful aesthetic touchstone is the photographs of Nan Goldin. If you imagine this, magically animate with such thick Irish accents that the (Irish) film-maker has felt the need to subtitle them, then you'll have a pretty good idea of what Hammer and Bell looks like.


Dan Canham's 30 Cecil Street is also about Limerick (neat bit of curating, that). Specifically, about the Limerick Athenaeum or Theatre Royal which could be found at the titular address. The building has been closed now for 14 years. Apart from on the flyer for the show, we are never shown the building. Instead, Canham mixes recorded sound with dance to conjure the building, its history and its present.

Unlike Thorpe last week, Canham is performing 30 Cecil Street every night this week, which theoretically means that I can watch and review it six different times, and try not to say the same thing twice (while also not contradicting previous reviews). This strikes me as quite an interesting challenge – although I apologise to Canham in advance that I'm using his piece as an exercise.

As such, I think I'll say relatively little about this first viewing, since I was pretty tired last night and probably – partly because I knew I'd be seeing it again – didn't concentrate as hard as I could/should have done.


One thing I did notice, however, which partially re-affirmed my preference for live performance over films (and if you're anything like me, you do sometimes find yourself wondering if you really *do* prefer performance, or whether it's just something you've fallen into by mistake). But, here, with all other things being equal (the seats, the room, the audience) it was incredible just how much more engaging watching a live person was, compared with making yourself concentrate on a film.

Perhaps it wasn't an entirely equal contest since the film was *very* static and oblique, while 30 Cecil Street is overtly eye-catching and crowd-pleasing.


The last item on the bill was the company Little Bulb Theatre.

Like most people, I suspect, I first saw Little Bulb in 2008 doing their reputation-making show Crocosmia in a terrible little venue on the Royal Mile. It was amazingly playful-yet-sad and as far as I remember, was a critical and commercial smash hit on the Fringe.

Since then, for some reason I've largely managed to miss their work. I say “for some reason”, but that's a bit disingenuous. Actually, I have seen them as house-band at Forest Fringe (the actual one in Edinburgh), and very enjoyable they were too, in a late-night, couple-of-drinks-first kinda way, but “for some reason” I never felt particularly compelled to go and catch their next couple of shows. Actually, I suppose *that reason* was the way that subsequent shows were raved about. Not the fact that they were being raved about, that's fine, if a bit tiresome, but more the manner in which they were raved about. Nothing anyone said made them sound like they'd be especially appealing to me. But mostly I was just in a big old grump with Edinburgh and didn't fancy enjoying myself. I wanted to watch depressing, dark, analytical things with hard edges and straight lines, not cosy pastoral, rural, fluff (like I say, I didn't actually see it, but that was how everyone who told me about it made it sound).

So, I suppose it was with a small amount of trepidation that I wandered back into the Gate after Little Bulb had set up their instruments. I'd so loved the apparent turn-around (as I perceived it) of FF from purveyors of hand-made, home-knitted twee to something much more hardcore, and I didn't really want to see that continuum broken.

Actually, as it happens, I needn't have worried. Granted what Little Bulb did do last night was a world away from Chris Thorpe's fictions or Lucy Ellinson's #TORYCORE™, but it did a) seem to have a bit more style than I'd previously given Little Bulb credit for, and b) also reminded me that I do actually have the capacity to be charmed.

Their new shtick is doing the Parisian Gypsy Jazz scene of the 1930s. Last night they only played music, but apparently these songs (really rather fine) come from their new show, which is apparently based on Orpheus in the Underworld. And the music of Django Reinhardt. Which sounds quite fun. They also won me over by having pretty much all the inter-song banter in French. Actual French. Not piss-taking Franglais but an actual foreign language. Good. British theatre needs a lot more foreign languages in it.

[sorry for abrupt ending. Need to leave for tonight's show. Will round off and polish tomorrow, when hopefully I'll be feeling a bit more lucid and lively...]
Posted by Andrew Haydon at 19:16