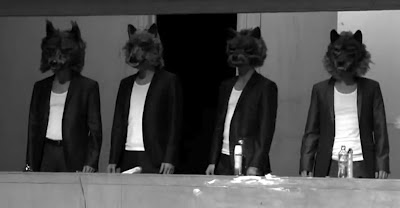 What's been interesting to me this week, both on Twitter and across various blogs, is a) the ongoing rumbly (and still largely-unfocussed/wide-ranging) discussion about Theatre and The Internet, and b) the number of trailers for theatre I've seen this week. Perhaps it was ever thus, and I'm only noticing it now, because I've become more conscious of them as *a thing* now that I've just written something about it, but it really does feel like, since feeling irritable about that Observer piece last Sunday, I've seen more trailers in one week than I ever remember doing before...

So, before getting on with finishing all those outstanding pieces I'm actually *meant* to be writing, I've knocked up some sort of hit parade of recent theatre trailers and had a bit of a think about them (that said, the following are arranged more thematically/in the order I'd like to talk about them than in ascending order of greatness).

First up is the Lyric Hammersmith's trailer for the international co-production of Simon Stephens's new play Three Kingdoms:


I like it. Not unreservedly, but I do like it. But perhaps part of the reason I like it is simply because I'm looking forward to it anyway and this provides something to which those shivers of anticipation can be attached. That said, I've been looking forward to Three Kingdoms since I saw its German trailer sometime last year:


It strikes me as interesting, the different grammars, the almost different shows that seem to be suggested by the two trailers. I kind of wish they'd kept that bit of Wicked Game in the English version, although I do think the German trailer's decision to faux-black and white everything – and without turning the contrast up at all – does the film no favours.

However, to put all this in some sort of local context, I think the Three Kingdoms trailer is infinitely superior to – picking an example at random after searching Lyric Hammersmith on YouTube – this trailer for Mogadishu - which with no additional information, could be a (fairly nothingy) advert for anything. While the trailer for director Sebastian Nübling's production of P*rnografie (also Simon Stephens), has been my go-to example of why I think YouTube trailers for productions are a good idea since 2008.

That trailer isn't the Lyric's only online promotional video for Three Kingdoms. They've also put out a longer video featuring clips from the show and interviews with both Simon Stephens and Lyric artistic director Sean Holmes:


If anything, this approach strikes me as more successful. Part of me wants to say 'because it feels more “native”', although I'm not sure that's true. But I like the explain-y quality of it – Stephens's stab at describing Nübling's way of working as a director (from 3:00) is likely to be better, and almost certainly more informed, than anything written after press night, for example. Moreover, it's incredibly useful for a potential audience: they get told something about this potentially unfamiliar way in which the director (coming from well within the German school of Regietheater or “director's theatre”) comes at a text. It's not told as a warning or to scare the horses, it's simply someone explaining very lucidly and engagingly why they think something is great. And I think that's a pretty good approach.

Interestingly, it's also the approach that the Donmar Warehouse have taken with their new trailer for their revival of the Robert Holman play Making Noise Quietly:


Indeed, this is even more interesting, as it doesn't feature *anyone* who is actually involved in the production. Instead, Hannah Price (who apparently made the film, according to Facebook – and I can't find any other credits), simply films and intercuts interviews with five playwrights who all really love Robert Holman's work: Ben Musgrave, David Eldridge, Duncan Macmillan, Sam Ellis and (again!) Simon Stephens (Mark Shenton provides a nice bit of background reading on Holman's influence here).

I'm wondering if this is going to become a new sort of MO for trailer-makers. I suppose *the interview* per se, is already a bit of a perennial favourite, along with the much-derided *Rehearsal Footage*, although this strategy of interviewing enthusiastic "experts", or even, in the best sense of the word, amateurs, seems relatively new to me and strikes me as a highly profitable line of inquiry.

I don't have as much of an animus against rehearsal footage as some, but rehearsal footage is, in general, about the least interesting thing you can put in a trailer (although, interestingly, Hannah Price again, gets round that in her previous Donmar trailer for The Recruiting Officer by concentrating on the live musicians featured in the show. They're really good, and, unlike people practising acting, transfer brilliantly to video. When backed up with a little interview with Donmar AD and show director Josie Rourke and then given a bit of voice-over context and shown playing in front of the assembled cast, you end up with the first thing that (belatedly) makes me actually quite want to see the show).

There is a cultural difficulty for Britain regarding trailers wanting to do anything else, though. Have a look at the trailer for Thomas Ostermeier's production of William Shakespeare's Maß für Maß (No, really. This one really is really, really good. Watch it):


To the best of my recollection, this was posted online a good couple of weeks before a single public performance had taken place. And not a rehearsal shot in sight. Now, obviously this isn't an option available to most British theatres. It is, however, probably the best preview trailer I've seen. It gives you an immediate, thrilling, almost visceral sense of what the production looks like – and it looks great.

It is videos like this that made me think the approach recently adopted by Rupert Goold and Headlong here might be the best domestic alternative – perhaps at least until a show is up and running. Although, here again we run into the difficulty of the differences between the German rep. system and Britain's usual one solid run. Measure for Measure opened last September or October and can next be seen on May 30th.

Slightly off the subject of actual trailers, but closely related to the Domar's big old advert for Robert Holman, is the Royal Court's fascinating What Plays To Read – Young Writers' Toolkit 5:


I have to confess, I'm not a huge fan of Largo Films's 13-second intro – curiously reminiscent of that late-night advert for gay chatlines featuring Bronski Beat's Smalltown Boy – which sits curiously at odds with Royal Court literary manager Chris Campbell's admirably chunky knitwear in the first shot. There are other things to grumble about too: the lighting fluctuates annoyingly; no one's name (or job) is mentioned, so you've got no idea where they're coming from necessarily (I mean, I know who Chris Campbell and Leo Butler are, but how many non-combatant members of Joe Public do?). On the plus side, it has got Doctor Who rather adorably singing the praises of Simon Stephens like he was, well, Simon Stephens talking about Robert Holman. It's also nice to see (if surprising) to see so many people opt for Caryl Churchill's last good play, Far Away.

Dislike of slightly flashy production values is also my main problem with the Globe's 30 second Globe to Globe season trailer:


Well, that and the fact that it's just too damn fast – apart from the final 5 seconds (1/6th of the total), which are just logos. But it gets the point across. And it looks like it's been made for maybe cinemas or TV rather than a leisurely watch on YouTube (does anyone else even do that?)

However, the Globe more than redeems itself since it also has a dedicated YouTube channel and some of the individual shows also have their own individual trailers. More may appear as th season progresses. At the moment, easily the best is the one for Juba Arabic from South Sudan's production of Cymbeline:


Filmed in situ in South Sudan, the short film brings alive not only the possibility of the play, but also the company, their country, and that country's situation. And, yes, it made me more interested (a lot more interested) in seeing the play.

For my money, though, in a lot of ways, perhaps the most effective trailer appearing on YouTube last week was the new one for the Uninvited Guests' Make Better Please:


It maybe takes a (tiny) bit of time to warm up, but then it feels like a) it really lets rip, and, b) gives you (perhaps – I haven't seen the actual show) a really good impression of what it might be like to see the show – or at least what the show is like.


Obviously, the *actual* best trailer currently on YouTube isn't for theatre at all, however...