Forest Fringe at the Gate – 2

[still feels a bit unfinished, but there's plenty here to be getting on with]
Chris Thorpe 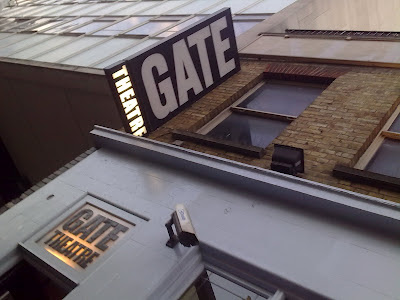 After Monday night's somewhat packed, frenetic programme, Tuesday's FF@TG feels like a slightly more orderly affair. There's a long-ish story from week-curator Chris Thorpe, originally commissioned as part of Paines Plough's Come To Where I'm From season, a shorter work that Thorpe wrote for the first Forest Fringe in 2007, a you-can-still-smell-the-wrapping fresh piece by Thorpe and Field written yesterday afternoon and then Chris Goode performing his 2008 piece Infinite Lives.

It's interesting to note, then, that the two main pieces of the evening actually originated well away from Forest Fringe and as such the evening is partly just a retrospective of rarely seen work made by artists who have also appeared at FF. Not that there's anything wrong with that. At all. After all, FF has always presented pieces made by its various artists which have also been shown in other places, as well as originating new work. And, hell, I was very grateful for the opportunity to see the work.

Also fascinating was the way that the four pieces, when presented together, as last night, revealed some interesting synchronicities (almost certainly the wrong word, since they were written separately over a five-year period). If the first night could be seen to have loosely been united by ideas of travel and migration, place and belonging; Night 2 went from localism to globalisation via violence, aeroplane crashes and suicide.


The deal with Come To Where I'm From was that the newly-re-engergised, New Writing touring company Paines Plough commissioned a bunch of Britain's leading New/young/emerging/emerged writers to write a short story about where they were from and read it out themselves at a series of events across the country. As such, it's great to see Thorpe's Manchester Royal Exchange contribution get its first London outing.

The story of Thorpe/Manchester (how I wish experimental writers gave things titles/told me what the things' titles were) is as follows [SPOILER UNTIL END OF PARA]: some blokes get pissed after a game of football. One of the blokes falls asleep in the middle of the sitting room with his mouth open. The others take turns at dangling their bollocks over his mouth. Bloke wakes up. Goes home. Gets a golf club. Returns. And smashes one of them in the face with the golf club.

The story is told from in first person from the perspective of the sleeping man/man-with-golf-club and lurches with the same sickening drunken logic from very funny to incredibly tense very quickly indeed.

Yesterday I suggested Thorpe's prose style shouldn't remind me of Bret Easton Ellis. Last night's first piece made me think more of a cross between Chuck Palahniuk and the narrator of Mark Haddon's The Curious Incident of the Dog in the Night Time - itchy violence related with autistic attention to detail (yes, I know it's probably somehow wrong to use “autistic” as a shorthand like that, but then, it's a shorthand people understand, and I don't think them understanding makes them bad people, so... And in this context, it feels apt).

It's a sort of style built on repeated, spiralling clarification: “Statement. Full stop. Not that I'm saying ___; or ____; or ____”. It's very funny, but also painful, and at times feels genuinely risky – having a narrator who does step over lines, who does lose our sympathy, who does go too far. One particular digression about how the narrator's friends are laughing like monkeys veers off into the difficult observation that the narrator hates how society has got so that every time someone says “monkey” people think they're talking about black people. It's catch-your-breath, did-he-*really*-just-say-that? stuff. It's also observed with a forensic acuity.


Thorpe's second piece is older; from the first Forest Fringe in 2007, in fact. A nice, unexpected bonus of getting to see Thorpe doing bits and pieces from across his career – at least since FF opened – is that you get to watch his style gradually evolve. Thorpe/2007 is a short piece which I'd say owes a fair amount stylistically to list-based writing of Tim Etchells.

For those of you who don't know, Tim Etchells is one of the founding members of the seminal Sheffield-based performance company Forced Entertainment. He's also possibly one of the least-acknowledged most-influential writers-for-stage Britain has. Because Forced Ents (FE) are primarily seen as makers of “devised” work, and because their work *is* collaborative, Etchells the writer seems to get overlooked as a phenomenon. Which is pretty stupid, since he's one of the best we've got.

Anyway, he (Etchells) has got one particular mode of writing which is essentially a list. And it's the length of the list, and the dizzying array of real and imagined elements on the list, that take it from being a list and into the territory of being something like a set of coordinates for a story. Or at least that's kind of how it feels to me.

For my money, Thorpe/2007 operates in the same sort of way. It's tentatively framed as the contents of a black blox recorder retrieved from inside a boy who blows up at 37,000ft. (exploding planes seem to feature heavily in Thorpe's short-fiction repertoire – perhaps an inevitable consequence of post-9/11 fiction, perhaps not). The list is such that it delights and disturbs in equal measure, with uncomfortable juxtapositons, improbable inventions and bleak jokes.


Thorpe and Field's piece which follows Thorpe/2007 was inspired by Field being delayed on the underground on the way to the theatre by “A person under a train”. “The worst sentence in the English language” observes a deadpan Thorpe as Field is fiddling around in the lighting box before the piece starts.

The piece itself is essentially another list. This time of, I suppose, possible alternative phrases for “a person under a train”. It veers around from the imaginative and poetic through social comment to the mordant and black; at once compassionate and callous; trying to conceive of the enormity of a sudden suicide, reflecting both the failure of language and society; all the while placing it in the all too familiar surrounds of London's Underground; a small angry, urgent, urban hymn to despair and the need to remember our humanity.

Jon is drunk, middle-aged, and alone in a carriage on the Metropolitan Line with a young man sitting a few seats away whom he quite fancies. Jon is drunk because it was his leaving drinks after work. He's left his job to write a novel. A gay, sci-fi novel about a pair of lovers in the future called Bastian and _______, who have gills. And vaginas.

Apparently the original version of Infinite Lives played a couple of dates in Bradford and a couple in Oxford as a *full production* in 2008, with Unlimited Theatre's Jon Spooner playing Jon (hence me assuming that's the spelling of the character's name is the same). I didn't see that, but knowing Spooner as a performer, I imagine it was fairly different.
However, Goode is a phenomenally good performer of his own work (and other people's work, thinking about it). His introduction of the piece; [I'll have to paraphrase:] “Look, the person in this story isn't me. I'm going to be *playing a character*, but I can't be bothered to actually, y'know, act, so can *you* just pretend?” manages to distil into impossible simplicity so much of what he's written about performance, and of *being* on stage, and about liveness that you almost giggle at how brilliant he is.

And the text. My God.

As the title suggests, Infinite Lives plays with a pretty big canvas. If you were to try and break it down, you could say that it's concerned with numbers and technology; about “the future” - both imagined and actual; about eroticism and pornography, desire and love; about the internet and travel; about the ethics of globalisation and about the necessity of hope. I guess. That's some of it, anyway.

The title itself comes from a cheat-code for Jet Set Willy that gives the player infinite lives. As Jon explains, you'd think this would be good, but since it's possible to get onto a screen and fall off a ledge, the game will only keep resetting Willy to the top of his fall, so that his infinite lives are spent dying. Over and over again.

Jon also talks about The Future. The future that is now behind us and that never happened. The future as imagined in the 1950s about the impossibly distant year 2000, where everything basically looked like the 1950s, except that it was encased in plastic bubbles.

At the same time, Jon's existence is incredibly “futuristic” – that is to say: contemporary. He spends his life online; all his friends are on Skype; he gets his food delivered to his door; and there's The Internet. Which no one saw coming. And trainers made god-knows-where, by god-knows-who. And computers, whose parts come from God-knows-where; and which are assembled in China by God-knows-who.

And there's Carlos. Who clearly has problems of his own.

And then there's suddenly a vision of these hundreds of thousands of lives being lived around the peripheries of our capitalism, whose days are like those of Jet Set Willy with the infinite lives, lives that get reset every day just so they can start falling and dying all over again.

At points, Infinite Lives is about as bleak as anything you'll ever see.

Surprisingly, Goode manages to tag a happy ending onto it, which on one level feels like a relief – it could just as easily have gone the other way - but ultimately, after invoking *so much* discomfort and suffering, it is a bitter sweetness.

Nevertheless, Infinite Lives is a spectacularly rich piece of work. Right up there with Goode's best. It is frankly ridiculous that last night represented its London premiere, and remains one of only a handful of performances the script has *ever* had.

Yes, on one level, this demonstrates another facet of just how useful this season of FF at the Gate is, but it also suggests something rather depressing/worrying about the state of British theatre more generally if scripts this good are somehow not being afforded much wider attention.
Posted by Andrew Haydon at 19:06