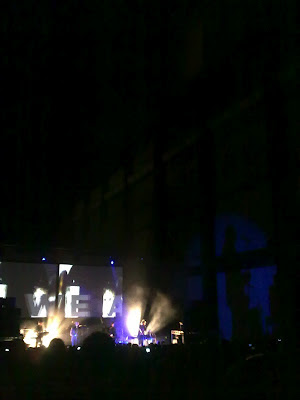 Slight change of plan. Thanks to a last-minute schedule re-jig, I spent the whole of Saturday at the Neue Slowenische Kunst symposium at Tate Modern. As a result, I didn't get to Forest Fringe on Saturday evening (although I did see both the Melanie Wilson and Gemma Brockis pieces at the BAC in March, so can discuss them in the full round-up). There will be a review/account of the NSK event, written primarily for Exeunt, but I'll stick up a link here, and eventually will post the whole thing here once Exeunt have wrung all the hits out of it.

Being at Tate Modern the NSK thing all day (literally *all day* - 10.30am until midnight) means I've also not had time to write much. So the projected essay about *embeddedness* (and indeed the end of the essay about fixity and recording) will hopefully be appearing tomorrow. Along with me apparently trying to review a Laibach gig and knock up an account of an 11½hr seminar...

On the bright side, the NSK event proved incredibly helpful for clarifying and sharpening some thinking on avant gardes (the Laibach concert was subtitled: Monumental Retro-Avant-Garde – of which, more asap). This felt particularly useful in relation to my current writing on Forest Fringe, so it all feels very worthwhile; it's just put a bit of a hole in the actual production of words. Anyway...

For those of you who haven't got the faintest idea what I'm going on about, here's a YouTube video I made at the gig (in THE TURBINE HALL AT TATE MODERN!!!) yesterday (not ideal quality, doesn't convey nearly enough what it felt like to be there, and won't be anywhere approaching loud enough) of Laibach doing B-Mashina from their soundtrack to forthcoming, daft Finnish film Iron Sky (which is what's playing on the screens behind the band) and under that, there's my review of Friday at Forest Fringe...