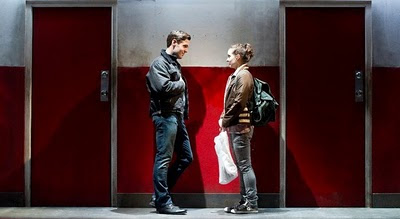 However, fittingly, given that Remembrance Day opened last night night at the Royal Court, one of the the things I found most interesting about the book was Sierz's omission of precisely this sort of play from his consideration of New Writing in Britain.

The character of the plays which are produced under the auspices of the Royal Court's International Programme, and what is taught at their International Emerging Writers Residency, is a subject that has interested me for quite a while now.

Put bluntly, I have wondered in the past whether the scheme does more damage than good.

In short, I have wondered if the Court's practice of identifying promising young writers from across the world, shipping them bodily to London and teaching them how to write “the political explored through the personal” State-of-their-Nation plays is the best way to proceed.

Apart from anything else, it strikes me that this approach could steamroller precisely the thing it is theoretically enabling – the internationality of the writers. Rather than allowing for the breadth and depth of other theatrical cultures, it might just be forcing them into a very British model.

Similarly, with the international seasons, there's the interesting question of what happens when you give a text written by someone used to a culture of directorial interpretation to a director from our “serve the text” culture.

I now wonder, though, if these objections aren't also grotesque simplifications. Isn't it equally possible to argue that it is precisely this hybrid approach that makes the work so exciting?

Consider again Remembrance Day. It is described as a family play which explores one of the biggest faultlines in Latvian history and society – the country's successive occupation by Nazi and Soviet forces and the fact that as a result, since the country's independence from the USSR in 1990, Latvian veterans of the Waffen SS annually parade with pride through Riga.

At the same time, the only reason we Britons ever came to know this is that David Cameron and the Conservatives allied themselves with members of the Latvian far-right in the European Parliament leading to a rash of expository news stories.

As such, it strikes me that what the “International” department at the Royal Court have provided us with is not only a play about “over there”, but a piece specifically tailored to how “over there” relates to Britain, right here, right now. It might not relate much to what Latvian theatre is actually like – for that you want to check out some Alvis Hermanis – but it proves that these days that elements crucial to understanding the state of our nation extend far beyond our national borders.