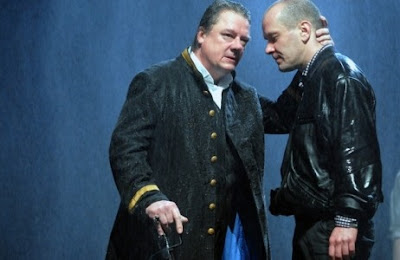 When the Donmar Warehouse staged Dennis Kelly's version of Heinrich von Kleist's Prinz Friedrich von Homburg last year, it was accompanied by a fairly bad-tempered, largely uninformed debate, about the fact Kelly had had the audacity to change the ending.

That said, those who had seen what the Germans had done to Kelly's Taking Care of Baby earlier that year might have wryly imagined he was merely indulging in a bit of proportional retribution.

One of the most interesting things about Armin Petras's production, then, is the different alterations which he'd made. Unlike Kelly's sole noted alteration – changing the ending so that the Prinz, sentenced to death, is indeed executed rather than being given the last-minute reprieve in the text; having his blindfold removed; him asking “was it all a dream?” and being answered in the affirmative – in Petras's version the still Prinz lives. He doesn't, however, ask if it was all a dream, because here it seems like all references to dreams and dreaming have been radically downsized, if not expunged altogether.

The production is designed by Katrin Brack, who also created the wall of fog for Dimiter Gotscheff's Volksbühne Ivanov. Here, instead of fog it's a constant downpour of stage rain onto a black polyurethane floor. The production is 1h45 and it rains almost throughout. There is one moment when it stops, very close to the end, and the effect of the silence is astonishing. The effect of this fake rain perpetually tapping the plastic is incredibly unpleasant, however; if grimly, effectively atmospheric. Visually, on the other hand, it looks great – and is perhaps the most dream-like element that remains in the production.

Oddly, it also makes the production also at least look oddly like the sort of thing you might expect to find in the Donmar. The monochrome blue/white lights shining a high angles through the mist of rain onto ersatz historical costuming (Aino Laberenz) all looks terrible Grandage. On the other hand, at the Donmar, one would expect the rain to stop once you'd got the point. Here it feels like the gratuity is the point.

Interestingly, Petras's take on the text also comes across as very similar to Michael Billington's take on Kelly's version. Again, the target seems to be the historical trajectory of Prussian militarism. Except here the Prinz is clothed in the get-up of the modern neo-Nazi. His fellow Brandenburgers might be dressed in slack Prussian blue suggestions of the period's military uniforms – albeit topped off with American GI(?) helmets, his dream-girl Natalie and the Kurfürstin might be laced up inside a plasticky period ballgown (which might well *not* be plastic, but very wet material), but he's come straight out of Romper Stomper.

The argument being made is clear enough – in the military codes of Prussian history lie not only the seeds of the Third Reich but in the fringe far right of today – but it's neither a terribly original point, nor an especially creative way of making it.

Indeed, many other aspects of the production also don't really work. Perhaps the most irritating is the choice of music – the play opens (?) and closes with a terrible MOR ballad by the German neo-Nazi band Böhse Onkelz, which at least makes sense given the costuming, but then most of the rest of the piece is intercut with this melody from Michael Nyman's music for Prospero's Books.

That's not to say Michael Nyman's music for Prospero's Books isn't good, and the music does work quite well on at least 60% of the occasions it's used, but: surely using bits of Michael Nyman music from a film is something you should stop doing once you're no longer a student. Was the whole of Nyman's collaboration with Peter Greenaway intended? Was there a link to The Tempest that Petras was hoping to evoke? Or, was this a move roughly as thoughtful as choosing the music used behind trailers for science documentaries on BBC4? There's also some similarly artless use of video (Chris Kondek) – looking mostly like newsreel footage of Nazi parades, which is projected meaninglessly through the rain onto the back wall of the stage to no real effect.

More problematic, however, was the acting (and indeed “macting”), or rather the way the actors are on stage. It's almost unwatchably unfocused. Nothing anyone is doing or saying really seems to connect with anyone else. Moreover, this isn't down to a clever directorial conceit-gone-wrong (or even gone right-but-not-enjoyed). This is some pretty conservative story-telling-acting just failing to get started. It's almost like a study in one-note acting, or even no acting at all. Lot of things happen in this play. You wouldn't realise it watching this production. And this isn't down to some over-elaborated V-effekt or post- something or other, it's just a strange kind of energy lag, or charisma vortex. Perhaps it's just the rain, but this Prinz Friedrich von Homburg looks distinctly under the weather.