If Romantic Afternoon seemed to touch on questions I'd already been asking myself about “non-narrative” performance, CMMN SNS PRJCT (henceforth CSP) seems to exist far more happily within my comfort zone. And it was performed in English, God bless their Argentian/Swiss hearts.

In British terms, this was exactly the sort of show one could confidently expect to see at Forest Fringe (indeed, I have no hesitation in recommending Andy and Debo to invite Kalauz/Schick to this year's). In short it was confident, charming, demonstrably “Live”, interactive, fun, funny, smart and generous.

If you wanted a strap-line, I'd suggest billing it as a Marxist performance raffle. The thing starts with Laura Kalauz and Martin Schick standing on stage in their pants (and socks. Aw) as the audience enter. There's a table with a bunch of household possessions on it. These they give away. They then try to buy or hire clothes from the audience.

After this there's an uncomfortable moment when they return fully clothed and seem to be doing some very heavy handed alluding to Waiting for Godot. But that turns out just to be an un-introduced party game of guess-the-play. Which turns out to be terrific fun. There's all the usual playing with being a performer and what it means to be on stage and who one is, and who one's character is. This is later demonstrated again with one of the performers apparently doing/saying something heartfelt and the other than asking for the bit of paper that bit is written on and then doing it again. You know the kind of thing. This is one of them and a rather nice one of them it is too.

And all the while they're doing it in your clothes! This isn't even what they'd be wearing if we, the audience, had given them something else to wear (unless they had a hell of a lot of plants in the audience – which I doubt. Actually, I would have been fascinated to have seen the show on another night to check out how much of the liveness really is live. Pretty much all of the crowd-based stuff, I'd have guessed, and if not, it's some of the best pretending of “live” I've ever seen). You can't even judge them by their clothes! Let alone by what they're saying, when another of them says the same thing a minute later...

These meta-theatrical heads-ups are fun enough, and their more-or-less non-stop bantering with the audience is so perfectly judged – perhaps given a helping hand by the fact both performers are both attractive and charming – that when we get to a moment where Laura starts reading out a speech about how great it is that we're all together in the same room and how it's great that we all like and respect one another, it isn't until she gets to the bit about “purity of the blood” that we realise where that particular text has come from (I might be wrong about that, but there were certainly echoes and moreover there was a sudden chill in the room – discomfort and tangible hatred of the sentiments). Most chilling was how warm and fuzzy the first bit was, though.

Beyond this there's more business with guess-the-play and then even an auction of performing rights of the play – in this particular performance this struck me as being very funny. There aere also all sorts of echoes – tiny little reverberations – of the financial crisis, a mounting problem with credit and debit. It's so light that you'd think it could be missed, but at the same time somehow incredibly obvious, but charmingly so. Thinking about it, Kalauz/Schick actually have got a pretty good line in resonance going on...

They then build a big wall, briefly play with the audience's notional willingness to intervene in an act of Abramovic-style self-harm, offer a quick, neat demonstration of Marx's Kapital and Proudhon's maxim “property is theft”, give away the cash profits of the show and then, Fin! Fun! 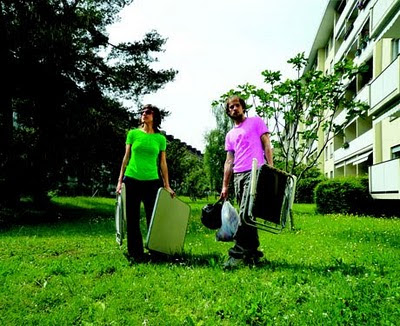 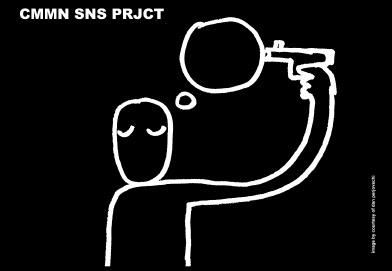