This is probably not finished yet 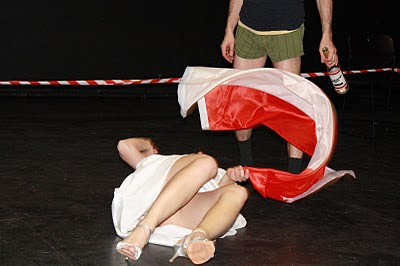 Where CMMN SNS PRJCT felt like familiar theatrical territory, mariamagdalena's Bis dass der Tod uns Scheidet (Until Death do us Part) is remarkable for being both the most familiar thing imaginable, and a likely contender for the title of “thing least like a piece of theatre I've ever sat in”.

Because what Bis dass der Tod uns Scheidet is, is a wedding reception. And that, ladies and gentlemen, might be just about all it is. When I think about it, I'm surprised I've never seen anything like it in a theatre/performance space before. Actually, I almost have – the Uninvited Guest's Love Letters Straight From Your Heart has the same U-shaped table configuration and again places its audience at its centre – but still, much more different than similar.

But, I've been at wedding receptions before. And this is one. Albeit, one for someone we've never met (Polish-born, Austrian-domiciled performance artist mariamagdalena herself and a bloke playing her new husband), and it's not people who have *really* just married (they might be married for all I know, but certainly not just enough to warrant a reception).

Which is all very interesting. After all, one spends a pleasant evening at a wedding reception. And this one is no different. Drinks are brought round – the theme here is unmistakably Polish, albeit largely conducted in German – so the drink is vodka (no, I don't, fear not), the wedding band plays, and there are party games. Many party games (again, I don't). And dancing. Much dancing (Nope, don't do that either). And more drinks. And so on. So, yes, I'm having all the fun a teetotal wallflower usually does as a boozy, dance-y wedding reception. Which is more than you'd think, actually.

There are perhaps three or five moments of what might be identified as the usual sort of “performance” one “sees” in a “theatre” – there are the speeches by the bride, groom and father-of-the bride; there's a strange interpretative dance interlude in which the burly band-leader and the bride's-best-friend quick-change into preposterous leotards and prance a mock-ballet, before disappearing off to change back again. And then toward the close, there is a “first dance” in which the bride and her best friend seem to be danced ragged and drunk by the band-leader and groom.

In my enthusiasm for “stories” (I am still English, it doesn't just go away overnight the day after you read Post-traumatic Theatre, you know) I wonder if there's meant to be one about the bride being more in love with the band-leader than her somewhat insipid husband. But it seems unlikely. In short, there's no more story or organising principle here than if we really were at a wedding reception. Where, of course, there is a “story”, but it's one which has already happened, and we're sat in the beginning of “happily ever after”. Or, conversely, there are a hundred (or more) people in a room, all with their hundreds of stories. But since they are mostly strangers, you never get to hear them. You just acknowledge that they're probably there, and reconcile the narrative strategies of the strangers with your own take on the political nature of story-telling.

What Bis dass der Tod... might be doing is playing games around the idea of eastern Europe, kitsch, clichés about the Polish life as perceived from the West and about the enjoyability or otherwise of 80er/90er Europop (is that what it's called here? Probably not, on reflection).

Again, because this isn't at the heavy atmosphere end of things where one sits in one's seat in the dark auditorium and gets to contemplate the multiplicities of meaning in what one's seeing – quite the reverse: one sits in a wedding reception watching fellow gästen playing disco-musical chairs and burst-the-ballon-by-leaping-on-someone's-lap-with-it – this is *so* experienctial that one struggles to reflect much at all.

Actually, is that true? I think, actually, I reflected quite a lot. But not necessarily on the piece itself, so much as *in* the piece. Which is an interesting variation on the usual way in which “immersive theatre” appears to expect to work usually. Instead of being any pressure to “join in”, per se, instead you're joined in by virtue of being there. And just watching is taking part. You don't even need to properly configure the “wedding reception” with “willing suspension of disbelief” for it to work as a “wedding reception”. Does that make any sense at all? What I mean is, you're already there in a hall with one's own (real) boundaries about how much you ever join in with dancing, silly games, etc. and it's no different to how you'd be if the wedding reception were a real one. And, frankly, it matters not a jot, once the motions are being gone through, whether it is the real wedding of people you don't know, or an entirely pretend one.

I'm not fully sure to what end mariamagdalena made this piece – repairing to the “staging the private in public” motto again might cast some light – but, yes, interesting. If I liked wedding receptions more then I might have found my new favourite form of theatre. As it is, I imagine this might be similar to all those Duckie events at the Barbican – except without anyone taking their clothes off or bringing class into everything.