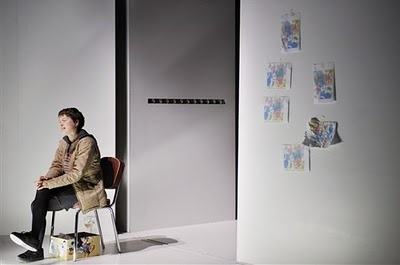 I first saw Dennis Kelly’s play Taking Care of Baby at its London premiere in 2007 (the production was co-produced with Birmingham Rep and so had done a month up there before transferring to the Hampstead). I liked it enormously. Indeed, it was one of my top ten plays of 2007. The play is also much-admired in Germany. It was nominated as several critics’ choice of Best Foreign Play 2009 in Theater Heute’s annual end-of-season round-up. This might seem strange to us, since those nominations came solely on the basis of the translation, which was published in 2009, but had yet to be performed. With such ringing endorsements already in, it makes a lot of sense that the rights to the German language premiere were snapped up by Deutsches Theater, Berlin.

Prior to seeing the show, I was curious to find out how what to me seemed a very specific, very British play would play in another country. Taking Care of Baby, after all, is playing a game that is very specific to British theatre with a subject that was very current when it opened in 2007. It pretends to be a piece of verbatim theatre on the subject of a woman wrongly imprisoned for killing her children, largely on the basis of the testimony of a doctor with a theory. It seemed to be a horribly plausible, only thinly fictionalised version of the events surrounding the discrediting of Dr Roy Meadow and the overturning of the convictions of Sarah Clark, Trupti Patel and Angela Canning. Germany has far less “verbatim theatre” and an entirely different relationship to “Münchhausen’s Syndrome by Proxy”. Equally, it doesn’t seem to go in for relevance fetishism in anything like the same way, so they’re in the weird position of liking the play as a piece of writing, rather than for its meta-theatrical properties and social commentary. Interestingly, re-reading the play before seeing the production (when in Germany, etc.), I could see the Theater Heute panel's point. It is a great text. Subtle, playful and much less context-dependent than I'd imagined.

Not that you’d realise this watching this production.

Regular readers will know I’ve got a bit of a thing for German regietheater. I still count Sebastian Nübling’s Pornographie as one of the best productions of a British play I’ve ever seen. However, Sascha Hawemann’s Taking Care of Baby won’t be joining it on the podium. In fact, it compares very poorly with Anthony Clark’s original production.

I’m all for cutting texts, imposing interpretations, and creating something that might almost be counted as a new work – even in the premiere of a new play – [but I'll save that argument for another time]. I would suggest, however, that the result should at least try to be as intelligent as the original.

It's one thing to cut or play-against-the-text for a reason. It's another thing entirely to cut things, or re-attribute speeches for no readily discernible reason, while leaving large tracts of script intact while seemingly flapping undirected just because they are in the play.

There are things I like very much about the productions – small, strange and, to me, inexplicable things like the character of the child's father wearing a too-small plastic Donald Duck mask when he appears;.and the fact that the Roy Meadows character – who, in the British version, was played (brilliantly) in the only way I could have imagined: the archetypal tweedy, mid-fifties, grey-haired, slightly academic, slightly vain professorial doctor – is here played by a much younger man in a garish orange turtle-neck with trendy glasses and floppy hair.

[As such, it was perhaps these marked cultural differences that kept me from actually putting this review online for over a year. What I wondered, as I expand on here, was the extent to which my take on any play, performed in a language I didn't understand at all, in a cultural context that was all new to me, was of any earthly use to anyone.]

On the whole, however, it feels very much as if the production here has failed to gel. And beyond that, rather than making intelligent cuts or astute choices of interpretation, the director has simply ironed a fine an textured piece of work flat. 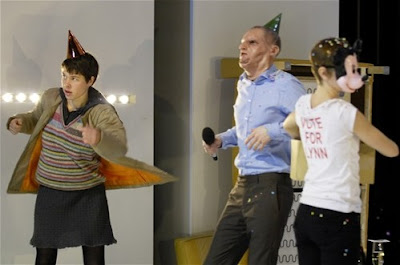 [I'm not entirely sure why I was shy of posting the review at the time, since pretty much the German reviews all seemed to have much the same issues...