This Is How You Will Disappear - Kampnagel, Hamburg 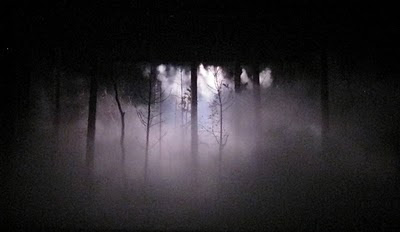 This Is How You Will Disappear is the 5th(?) collaboration between French choreographer and director/+director-of-puppetry Gisèle Vienne, the cult American author Dennis Cooper and Anglo-Austrian musician/composer Peter Rehberg. Added here are Stephen O'Malley of the enormous-in-certain-circles band Sun O))) and the septuagenarian Japanese smoke-machine artist Fujiko Nakaya (pictures of her work here). It's almost like an ultra-underground supergroup: the biggest fish from the least-known, most-difficult ponds.

This is how it opens: there's a gymnast (female, blonde) and her trainer (male, forties). They're in a clearing in the woods. Or a in forest. She's doing exercises; stretches and somersaults on the forest floor. He's helping out with a hand placed here on the small of the back or, there, helping her make her toes touch the back of her head.

This is how it sounds: almost overwhelming the scene is this incredibly loud noise-scape. It sounds like it has been composed from massed ranks of overdriven guitars, horrible static shocks and the sound of distant screaming. It makes everything happening on stage seem like the most tense thing in the world. “An atmosphere of menace” doesn't come close to describing just how terrifying the music makes this scene.

This is how it looks: the setting is pretty self-explanatory. It manages to suggest and encompass everything from mankind's earliest, primal understandings about forests after nightfall, right through to the woods at night of modern American horror films. As stages go, this is one of the most spooky I've ever seen. The light is so sparse and the mists are such that you really can't see beyond the first couple of trees. Apart from the area where the athlete and her trainer are, all is darkness. And there's this music heavily implying that the very worst thing imaginable is almost certainly lurking in the darkness. I found myself having to keep looking away from the stage at the comparatively reassuring walls and ceiling of the auditorium to remind myself it was made up.

The way the scene and the soundtrack develop is essentially an exercise in ratcheting up tension and it far out-Hitchcocks Hitchcock. I shan't say any more than that. There are other scenes and other elements, but since – to me, at least – one of the performance's greatest virtues is suspense, it'd be wrong to give anything away.

I will say that the lighting states, designed by Patrick Riou, shift constantly – at one stage (or more) these are supplemented, or supplanted, by a stark video projection made by Shiro Takatani, which casts sharp, bright verticals against the black forms of the trees. The fog rises and falls, and that there are some arresting stage-pictures, veering between an almost cinematic photo-realist set and a totally non-naturalistic installation, sculpture or comment on the activity of creating of a forest on stage. Each adds a sense of layered meaning of the whole.

There is also more of Vienne's choreography (which I first saw in I Apologize in 2008, but which was – understandably – absent from the sit-down, one-man show, Jerk); a kind of jerky, dancing-under-strobe-lights movement. I've got no idea if this is a quote from another choreographer or her own invention. It feels like a part of Vienne's signature style, and seems to perfectly communicate the themes of her work. To describe: this stylised dancing is like a ballet about torture being executed with every other frame missing, performed at half-speed.

Vienne's thematic preoccupations are also well-met by those of Dennis Cooper, who has written the small amount of text featured in the show. Cooper has the distinction of being the author who wrote the book I've ever been unable to finish due to its content being too violent (Closer). I've not tried another since. I will say, his texts are much less all-out unbearable here (and milder than those in I Apologize). Indeed, if anything, there seems to be an (unexpected) element of self-ironisation; of playing with his own tropes, so to speak. Or perhaps not.

An interesting effect of knowing something of Cooper's background, or at least nationality, and also watching the performance in Germany, is that it seemed to lend several further dimensions to the associations which occur to one while watching the performance. For instance, this genre of what I'd initially read as an all-American cheerleader out in the woods at night, started to remind me of the sort of thing idealised by Leni Riefenstahl before 1939. Indeed, whether intentionally or not, the music also often takes on a distinctly Wagnerian tone, while the whole centrality of the forest and an athletic, blonde maiden... Similarly, the woods, the light through the trees, frequently evokes the work of German Romantic painter Caspar David Friedrich.

So, what does slinging all these things – and a bunch of other parts that I'm not telling you about – together in a wood with a smoke sculpture and a kind of heavy metal orchestra amount to?

If I say the best thing about This Is How You Will Disappear is its title, don't misunderstand me. That's not to say nothing else is any good. The rest of it is great. But the title really hangs over the piece. Following “About” a friend emailed me the following quote from a Saki short story:
“They leaned towards the honest and explicit in art, a picture, for instance, that told its own story, with generous assistance from its title. A riderless warhorse with harness in obvious disarray, staggering into a courtyard full of pale swooning women, and marginally noted “Bad News”, suggested to their minds a distinct interpretation of some military catastrophe. They could see what it was meant to convey...”

Which turned out to be exactly how I watched This Is How You Will Disappear.

What's immediately striking is the threat of it: This is how you will disappear, dear viewer. In woods, at night, violently. In clothes that are too small. Also the certainty; the Will Disappear. At each turn our understanding is underpinned by this idea of disappearance. The title suggests a meditation on the topography of certainty introduced to violence, rape and murder by slasher flicks, even the normalisation into cliché by the way such events are reported in the media. There's a hint that the title that almost suggests a knowing cynicism at it all: “This is how you will disappear, this is how I will disappear. It's how everyone disappears, these days”. Cynicism, yes, but also that sense of a corrosive fear; the sense that this is the thing that we're most frightened will happen.

There's also a hint that the whole performance gradually stacks up to a depiction of humanity abolishing itself, via the personal being subsumed into the quest for perfection. Humanity against human inhumanity, or against nature. The idea of the dark sides of our natures, outdoors in the nature, in the dark.

[Trailer for the show here – which might deserve a bit of a [SPOILER ALERT] for showing a couple of the coups that I wouldn't have let on about, albeit with no real context - In short, watch it, but then try to forget what you've seen if you ever get to go see the show]

[Photo at top from Dennis Cooper's blog here]
Posted by Andrew Haydon at 09:09