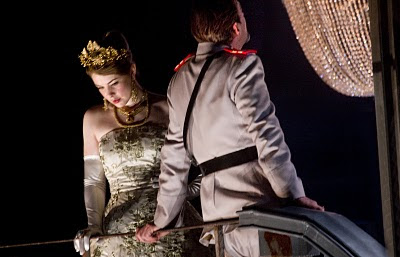 Other than Buggins’s Turn, it’s hard to make out why the National have chosen to stage Women Beware Women. At least, Marianne Elliott’s production doesn’t seem like the work of someone with a burning desire to do the play. It feels much more like a case of someone trying to get us all through something they've been asked to do as painlessly as possible.

That’s not to say that it’s unwatchable – indeed, the intention is clearly to make it as watchable as possible – but it does feel both deeply inessential and rather like a bad job that someone’s tried to make the best of. Indeed, having spent the pre-show admiring Lez Brotherston’s modern sculptural centrepiece set, it comes as a bit of a shock when Samuel Barnett wanders on and starts speaking in early modern English.

Like last year’s Revenger’s Tragedy and Nicholas Hytner’s Man of Mode or The Alchemist before that, it feels like the NT has hit a house style for reviving plays written before, say, 1800. The costumes are largely modern-ish or at least present day retro Italian 1960s looking things, with the odd medieval jerkin thrown in for the guards. The set is a two-sided, slick, mostly black, crumbling stone arch on a revolve which basically serves as backdrops for high- and low-life interiors and exteriors depending on lighting – much of which is provided by some enormous floodlights artfully hung on either side of the stage like implacable satellites.

It’s not a bad way of doing things, per se, but it does seem to be almost the default way of doing The Classics at the moment: the modern-ish costumes, so we can kind of get what *sort* of character someone’s meant to be because they’re dressed in a way that their present-day equivalent now might dress; the slightly over-done designer kitsch/bling vileness that marks out the more regrettable end of current fashion so that the whole appeals to (or at least connotes) the Selfridges/Harvey Nicks demographic and denoting the arriviste mercantile spirit of the times; and the slightly over-stated catholic kitsch to remind us, a) we’re in Italy, and b) of the troubled religious times during which the plays were forged.

(That said, it does make me curious about what revivals of current plays in 400 years time will look like, assuming they/humanity last/s that long)

Anyway, that’s all window dressing. We’re here to see a play. Aren’t we?

Perhaps not. It does feel a bit like the actual play itself is forever being pushed to the back of the room like an embarrassing uncle at a posh do. And with good reason. Given all the pains that have been taken to make the stage look smart and funky, the last thing you want is a shabby relic from a bygone age – with worryingly different values – turning up and cackling about incest and not terribly consensual intercourse.

The fact is, Women Beware Women is hardly a play with an attractive or modern outlook. As Howard Barker put it (in Conversation with Dead Poet - Arguments for a Theatre, p.25), "it is simply unrealistic to inflict slaughter on all the participants in the interests of morality. It was quite obvious to me you [i.e. Middleton] did not believe in that yourself but were fulfilling a convention".

Elliott seems to have taken a decision to present a lot of the characters as more sympathetic to a modern viewpoint, perhaps more than the text actually makes possible. The never-less-than-adorable Samuel Barnett turns the piece’s problematic protagonist Leantio from a man uxorious to the point of virtually imprisoning his wife into a Frank Spencerish worrier. When this fails and the object of his affections, Bianca (Lauren O’Neil), is seduced by a handily passing Duke, the way O’Neil plays a clutch of some of the most cynical lines in Eng. Lit. is more as “rape victim” than self-fashioning renaissance subject. One can see the modern point, but it reads here more like overplayed commentary on the text than actual characterisation.

Of the rest, Harriet Walter’s Livia is far and away the best thing on stage, although she – along with the other women – highlights another way in which this production is awful squeamish about what’s actually written in the text. I usually shy away from over-literal casting decisions, but here it’d be really interesting to see the play performed with an ultra-realistic cast. Put simply, the two young female love interests about both sixteen, Leantio is meant to be twenty and Livia, played by Harriet Walter (59) is meant to be 39. I know it wasn’t even written for women to play the women, and there’s no real argument for a staging where the performers are the same age as the characters they’re meant to play. Here it feels like yet another level of passing the thing off as being as socially acceptable as possible, though.

Granted the audience still seem to find Harriet Walter seducing young Barnett humorous (admittedly she is vamping and camping it up for all she's worth) – Lord knows why, she’s still the sexiest thing on stage by a country mile – but it’s the comic end of uncomfortable, not the disquieting. I’d rather see the really disturbing, near-the-knuckle version about barely-legal brides and watch the audience squirm, but I guess we’ll have to wait for the Dutch version for that. The final multiple murder ball is quite interesting; I think it manages to quote the death scenes (and possibly recent stagings thereof) from at least five other Jacobethan tragedies – although I’d have to check the text to see if that’s Elliott or Middleton’s invention.

And that’s kind of it. It’s very prettily done, doesn’t have a subversive bone in its body, beyond its repeated undermining of the text’s nastiness, and is artfully tasteful throughout. I don’t think there’s even a drop of stage blood spilt, despite the ludicrous pile-up of murder at the end. Hardly essential viewing.

_______
Spotted on press night: Jenni Murray. Raising the questions: a) is she contractually obliged to see everything with *Women* in the title, b) would Women Beware Woman’s Hour be a better title for a play?
Posted by Andrew Haydon at 11:41

Also spotted: Fiona Shaw. Raising the question, what with directing operas by day and gay spanking by evening, where does that woman get her energy?!

At the mention of Howard Barker, are you venturing over to Riverside Studios for his new pieces?

Barker seems to me to miss the point, which is that of course Jacobethan tragedy writers were aware of moral conventions and were playing with them. Women Beware Women is one of my favourites of the genre, precisely ecause of the absurd extremity of the dénouement... which Elliott excises almost entirely and replaces with her own impressionistic, choreographed version, lending weight to your view of the relationship between director and play.

You may well also have a point later regarding the ages of players, but it's a trade-off in terms of both period and modern perspectives: if you want Livia and Leantio to be the right ages, we would find little absurd or extreme in that, whereas casting 16-year-olds as Bianca and Isabella would disquiet us but would not have turned a hair of a period audience (aside from the women-on-stage aspect, obviously).

In other news, is it worth noting how deeply annoying Harry Melling's portrayal of the Ward is, even in terms of a character written to be annoying?

About the actors' ages (and the comment about "not turning a hair of a period audience"): stage brides of the period were often 16 or younger, but not so often off stage. The average age of first marriage for women in the period was 25 or 26, and there was strong sentiment against marriage in the early to mid-teens. (See also here.)

Yes, Shakespeare's Juliet is 13, almost 14. But the text emphasizes that she's too young to marry, and Shakespeare deliberately lowered her age from his source, where she is also said to be too young. It's as if he's saying, "You think that's too young? I'll show you too young."

Does "Women Beware Women" specify the women's ages? I haven't seen the play yet but am considering it.

Yes, the play specifies ages. Annoyingly I haven't got my copy of the text to hand, but I'm pretty sure it specifically says Bianca is 16 and later Livia (that's the one played by Harriet Walter, yes?) gets a laugh in this production with her line "I'm 39" (I paraphrase - and possibly get the number wrong) by playing it as a deliberate, transparent downplaying of her (the actress's)(older) true age.