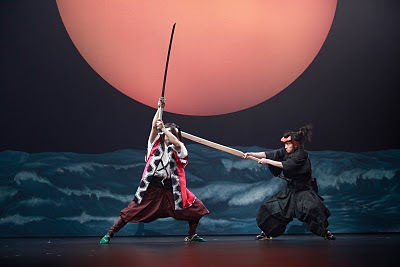 Dear Lord, two happy plays in as many days. Something’s clearly up.

As won’t be at all clear from the order in which things have appeared on this blog, I actually caught Musashi last Wednesday, the day after I saw London Assurance. Seeing one happy play in a week seemed odd enough to comment on. Seeing two in the same week felt downright odd.

In actual fact, Musashi is a significantly more complex creature than London Assurance. Written by the recently deceased contemporary Japanese playwright Hisashi Ingoue, it is essentially a Japanese period drama. Set in 1612 it is a reworking of the well known story of Musashi Miyamoto and Kojiro Sasaki who famously duelled on the small island of Funashima. The original legend has it that Musashi accepts the dual and then deliberately turns up late, when the sun has risen to a point where it shines directly in Kojiro’s eyes and Musashi is easily able to fell him with an oar which he has whittled on the boat.

In the original myth Musashi’s blow kills Kojiro on the spot – or rather, he leaves him to die. Here he calls for a doctor and scarpers. The play is built on Ingoue’s speculation about what would have happened if Kojiro had survived. He imagines these two master swordsmen locked in this eternal enmity.

The play begins with them encountering one another, for the first time since their fateful duel, at a humble temple which is also home to a curious band of pilgrims on a meditation retreat.

For the first twenty minutes or half an hour, the tone of the piece (not to mention pace) is slightly uncertain. The opening scene has an epic kind of quality to it. Then the introduction of the temple and those on retreat seems incredibly solemn. But then the whole thing seems to explode into this alternation of broad physical comedy and all sorts of wry jokes and charming surrealism. When the two would-be duellists refuse to stop fighting, they find themselves tied the legs of the monks occasioning some fairly amusing slapstick business, made all the more amusing by the apparent seriousness with which they still seem to take themselves. Meanwhile one of the pilgrims (man, am I probably getting these terms wrong) turns out to be an erstwhile aging Noh dancer. There a scene in which she shows her young female companion her most celebrated dance – the story of the Ghost Octopus. There are also semi-frequent references to the Ghost Badgers that live over the hill. It’s very strange indeed.

This was pretty much the point I completely warmed to the piece. After the uncertain start, it had relaxed into being charming entertainment that, aside from wishing the Barbican’s seats were a bit more cushiony, I was happy to sit back and enjoy for as long as they wanted – about two and a half more hours, as it happens.

And this is how the thing continues to unfold. A few fairly profound-seeming bits punctuated by these bonkers little dances, strange slapstick sequences, some pretty funny plotting, and the odd sword fight.

In the second half, it starts to look for a good long while like the basic thrust of the play is going to turn into a C17th Japanese Importance of Being Earnest. And then, just as you think you’ve pretty much got a handle on what’s going on, there is a final twist [which, even though the run’s now over, it still feels unprofessional to reveal].

And there you have it. Three hours of what is, I suppose, contemporary Japanese theatre – albeit feeling, for all the world, like you’ve just witnessed a modern staging of a much older epic.

Of course, part of the reason for this is a tower of sheer ignorance on my part. Obviously I don’t speak any Japanese – and it seems from the amount the performers speak on stage compared with the amount the surtitles give us to read, there’s a lot of nuance falling by the wayside. But even if the translations were as nuance-perfect as translations can get, unless they also came with footnotes, I’d still be mostly all at sea.

Apart from anything else, this is – shamefully – the first Ninagawa production I’ve seen. And beyond that, my knowledge of Japanese history, culture, philosophy, theatrical styles and genres is near-as-damnit to nil. The Barbican’s programme goes some way to answering the most pressing questions about the immediate context for this performance and the influences behind the play, but beyond that I was all at sea.

In many ways, though, it’s not an unpleasant sensation – to be forced to make sense of a performance largely on the strength of your own perceptions. On one hand, you’re kind of aware of your cultural limitations – for example, I found the very mention of ghost badgers hysterical. I wasn’t at all sure if this was the right response, but it still kept me amused. On the other hand, you do get the impression that in spite of the inevitable lack of shared cultural inheritance you do get the impression that some things tend to be funny or tragic in any language – primarily people with their legs tied to other people’s legs trying to be serious, as far as the former is concerned. Perhaps somewhere there’s a context that’s the traditional way of mourning the dead, but on this showing it looks like it might actually achieve a certain amount of universality. On the flip-side, bowed heads and sombre expressions similarly seem to communicate much the same in either culture.

So, another unexpectedly charming night in the theatre, and yet another opportunity to feel grateful for the existence of the Barbican, which at the moment is feeling once more like one of the most essential theatre destinations in London.
Posted by Andrew Haydon at 20:47

I think I might be the only person that just didn't 'get' Musashi. I've tried to articulate something close to a response on my blog, but it's still some way off from exactly pinning down my thoughts.

Your comment about the overlap of cultural responses (six-legged rope manoeuvers are always funny) is already making me rethink some of my initial reservations. But I keep coming back to the fact that only been able to understand the visual signals provoked a kind of anxiety in me. Why that is, I'm not sure, as it wouldn't have been the case with a subtitled foreign film or an opera or the like.

I'm still trying to put this thought into words, but I think it comes from the fact that most people seem to have taken the satisfactory pacifistic ending at face value, and I have the suspicion that it's not quite as neat as that. Hmm, might have to start writing about this and see where it leads ...