I Went to the House But Did Not Enter - Barbican 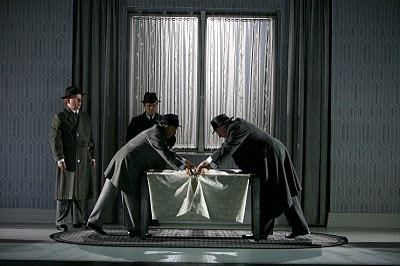 After a rather bumper week in terms of watching and writing I was hoping that I Went to the House but Did Not Enter might serve as an end-of-week chill-out. After all, it’s described as a staged concert, with texts by T.S. Eliot, Maurice Blanchot, Franz Kafka and Samuel Beckett set to music composed by Heiner Goebbels, performed by the Hilliard Ensemble and placed within stagings designed by the same. It doesn’t pan out quite like that.

I first came across Heiner Goebbels work at SpielArt in Munich in 2007 with his piece Stifter’s Dinge (Stifter’s Things – Stifter being an Austrian poet with a reputation for being deeply dull). What had stayed with me about that piece was firstly the surprise of going to a “theatre festival” and the first piece I saw having no actual performers on stage. The other thing that had stayed with me was the final image (was it the final image? I think it was close to the end at any rate) of a huge, shallow tray on stage being filled with salt or sand, black water gradually covering it, and dry ice drifting out over it as rain began to pour onto it from the lighting rig, making the water look like it was boiling. It was one of the most beautiful, original stage effects I’ve ever seen in a theatre. It doesn’t sound like much on paper, but, trust me, it was both very pretty and very impressive.

What I’d filtered out was that I’d actually spent much of the rest of the piece feeling a bit bored and fidgety. I soon remembered, though. Roughly twenty minutes into the 1hr45 of I Went to the House..., in fact.

Which is pretty unfair of me. I did, after all, request the ticket to see this. No one was twisting my arm. And, well, I do have a bit of a reputation for liking austere, minimalist, Teutonic work.

Well, somewhere in between watching plays with little movement in a language I don’t understand and this staged concert (in a language I did understand, with a bit more movement) lies my cut-off point. This really wasn’t my bag – although given that I’d had a pretty long week by this stage, this might partly have been a failure of my caffeine intake as much as anything else.

I should record that the vast majority of the audience seemed far better attuned to the work than I was, and applauded rapturously at the end, so it had clearly fulfilled most people’s expectations. And if nothing else, there was something oddly heartening about sitting in the Barbican’s large theatre and feeling like the dumbest non-aesthete there.

Perhaps my biggest problem was the sound of the music. I’d forgotten that I was faintly familiar with the Hilliard Ensemble from that CD of coffee-table music/portentous musical wallpaper that they did with saxophonist Jan Garbarek, which, in common with most other Classic FM listeners at the beginning of the nineties, my parents owned. My memory is that I quite liked it at the time, although I suspect I’d regard it with more suspicion now.

But, yes, the point is this is pretty monkish sepulchral stuff. Beautifully sung, but incredibly cold.

Similarly, the first setting was almost comically austere. Elegantly grey wallpapered walls of an Edwardian living room or hallway tower above the four members of the Hilliard Ensemble, themselves also clothed in sombre grey suits looking like they might come from the former half of the twentieth century. All is silent. After quite a while of this sort of silence, it becomes almost funny. There’s a temptation to giggle. The men stand silently still, contemplating a table, austerely laid with while china teacups and a white, porcelain, horse’s-head-shaped vase.

Two of the men go off and bring back on a large cardboard packing case. Slowly, very slowly indeed, everything in the room, the pictures, the curtains, the teacups, the flowers, the teapot the tablecloth and the vase are all placed in the box. Amusingly the water in the vase is also poured into an unseen receptacle within the cardboard box.

The box is moved out. Either during this process or once it has ended, the setting of Eliot’s The Love Song of J Alfred Prufrock is sung. Once this is done, or perhaps while it is still going, another box – almost identical to the last one, but slightly smaller, is brought into the room. From it nearly identical items are brought from it and placed back into the room almost perfectly reproducing the original scene – albeit with a black horse’s-head vase and different coloured flowers. 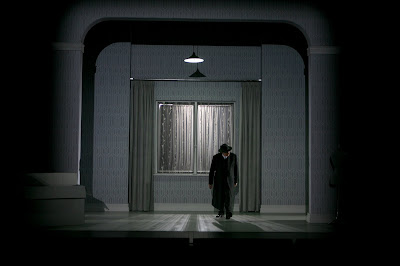 The point where the room has been packed does manage to actually pack quite a tragic punch. Coupled with Eliot’s mournful verse of a life reviewed with regret, this image of a person’s fastidious existence being neatly packed away is somewhat heartbreaking. The suggestion that this life will be replaced by a similarly ordered facsimile life by the room’s new occupant (at least I’m assuming this is the intended near-narrative; it needn’t be, but it seems the most likely) is less tragic than depressing.

For the next scenario, once Prufrock is done, the grey wallpapered walls are dismantled and slide noiselessly into the wings. The top of the room rises into the flies and the floor is rolled up. Next the full-sized frontage of a suburban Swiss or German-looking house is rolled to the front of the stage. Pavement is placed before it and a wheelie bin appears next to it. When it is all set up the lighting state – including the shadow of an unseen tree cast by and unseen streetlight – flicks on and the next scenario starts. This is the text by Blanchot, of whom I have never previously heard, although he was mates with Bataille and Levinas, so I probably should have done. Here the singers speak a vast majority of the text – a short story called La Folie du Jour, composed of a series of observations by the narrator or narrators.

The Kafka piece follows on from this set in front of the house rather than looking into its four visible rooms, is entirely sung rather than mostly spoken and is perhaps the funniest of the four pieces. I’m not sure why I kept looking for this compulsion to laugh - perhaps because the thing felt almost oppressively serious, that one was compelled to look for the chinks of lightness in its heavy armour.

The Beckett piece occasions another scene change. The house is wheeled away again and replaced by a huge corner section of a room that looks like a guesthouse from the 1950s with large ominous flowery wallpaper – think of a David Lynch film based in Scarborough crossed with the set of Romeo Castellucci’s Purgatorio and you’ll have a rough idea. 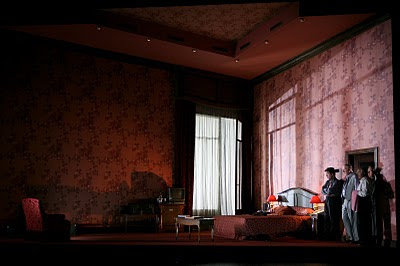 Once this scene change is finished – and I rather loved the deliberation of this – a pitch black safety curtain is lowered and the opening words of Beckett’s Worstward Ho are projected onto it in glowing green computer lettering.

A worrying proportion of the audience take this as an instruction. They’re probably the ones who laugh at:

Once we’ve got a fair way through the text, the screen lifts and the Hilliard chaps monastically sing their way through it all again, with the added incidence of their shifting about in the room slightly and gradually alighting on a slide projector and showing a selection of suggestive (not in the sense of smutty) snaps which again suggest a 1950s mid-American family on holiday, but honestly they could be anywhere. I think it’s just the David Lynch thing going into overdrive for me.

And when that’s done, the piece is over.

I’m not sure I’m managed to do full justice to just how severe all this felt as an aesthetic. It’s not that it actually made a specific point out of refusing comfort, but there wasn’t much to be had. The music had no tunes, the scenes had little or no action, the characters, or persons on stage gave away precious little about themselves.

On one hand, it felt like an exercise in reading the stage, but then there was also all this text also being sung. Strangely, in spite of all the moaning I’ve just done about seriousness and austerity, there was something refreshing about the whole thing. Like a kind of aesthetic sorbet. A minimalist palette cleanser after what was starting to feel like a theatrical motorway pile-up. As such, I think the piece has value, and probably a good deal more value to someone not quite as crushingly ignorant about contemporary music as I am. And once in a while it’s nice to be reminded that I’m not as postdramatic as I like to imagine; so, a useful experience, perhaps, if not actually *fun*, per se.
Posted by Andrew Haydon at 11:17