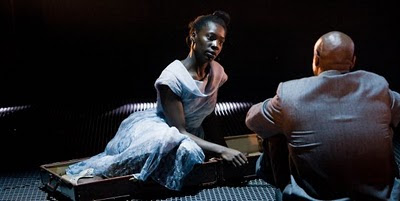 Now here’s a thing: before this blog stalled for Christmas, I think I’d got into a bit of a rut – if not here, then certainly at the Guardian blog – grumbling about the lack of regietheater (or “directors’ theatre”) in Britain, and championing what few domestic examples I could find.

I suppose it stemmed from two years of seeing hand-picked examples of the specie at various international festivals. Having subsequently seen a few more run-of-the-mill examples in their local context on the mainland I might have calmed down about it a bit.

At the same time, seeing those more workaday bits of regietheater has opened my eyes to the fact that, like Britain’s “serving the play” culture (one which I think I might have been a bit prone to over-stating), regietheater can potentially be just as predictable in its way.

The other thing that struck me – and this dawned on my watching Bijan Sheibani’s production of Eurydice at the Young Vic on Friday night – is that Britain does actually have a kind of default school of “directors’ theatre”. (I can’t believe I’m about to apply this as a near-perjorative, but here goes...) That is to say, a set of (admittedly different) conventions that can be applied to a production, which don’t appear to be decisions suggested by the actual text. In fact, in this respect, this British version of Directors’ Theatre is perhaps more perverse than its European cousin, in that while mainland directors’ theatre might foreground itself more and look more like it’s perversely chosen to ignore how the play seems designed to function, it does at least take the text as its starting point. I’ now wondering if the same could be said of the British model I’m about to outline.

I suppose it’s taken me a while to formulate this as an idea because firstly, the acting in such productions still kind of errs toward the sort-of naturalistic. At least, there seems to be a degree of “psychological realism” (as my European colleagues despairingly note it) behind the performances – i.e. the performers, you know, act sad and cry and stuff when their characters are meant to be sad. And so on. So in that respect, it looks like it’s “serving the text”, yes?

And then there’s the design. This often tends not to be naturalistic, per se. As often as not, there won’t be any set at all. Or else the playing space will be an artfully constructed kind of symbolic space – think of the long wooden trough for Sheibani’s own production of Our Class at the NT, or perhaps the mostly undressed expanses of stage used in National Theatre of Scotland’s Black Watch.

This gets in under the critical radar (well, mine anyway) by looking like a cross between expedient economising (building barely any set, or just having a nicely made floor is presumably cheaper (and more practical on tour) than having half a dozen elaborately detailed model interiors, perhaps relying on lengthy installation, a revolve or fly-tower) and by hardly drawing any attention to itself at all. Again, this sort of bare-stage approach again looks like it’s “serving the text” – at least to the extent that there’s not a design concept drawing attention to itself (and thus – so the thinking might go – away from the all-important text).

But Sheibani’s Eurydice made me have a look at all these aspects of what we might call British “serving-the-text” directors’ theatre.

The action is set in the round on a nicely designed floor made from large sections of black metal mesh flooring (there must be a better word for this – you know the sort of thing I mean – the sort of thing that all the gantries in Aliens are made of, for example). Above it are hung the frames of two further black metal squares with neon lights running round them. At a couple of points, sprinklers erupt, fountain-like, in the centre of the floor. And there are various lighting states, mostly providing either gloomy full cover or stark down-lighting of specific areas. You’ll have seen it all before, I expect; but it looks nice enough.

Enter Orpheus and Eurydice: two attractive black actors in swimming clothes and goggles. They talk at each other for a bit about being in love and, you know, how Orpheus is a musician and how Eurydice is a bit clever. Then they decide to get married and run off again. Then Eurydice’s father enters. He is dead. We can tell this because he’s in a blueish-white light. And because he says so. Anyway, the whole thing goes on like this until the end, and you know the story anyway, right? (here it is, if not).

Playwright Sarah Ruhl’s contribution to the myth is this addition of this dead father, the shifting of most the focus to Eurydice and the time she spends in the underworld, the almost total removal of Pluto, king of the underworld – who in the text is denoted as “Child” – the addition of a chorus of stones to help explain the underworld and then make the ending more sad, by having Eurydice not only fail to be reunited with her earthly love, but unable to return to the apparent comfort of being with her father in the underworld. All of which is fair enough, and kinda highlights how male-centric the original version was.

The back of the published playtext quotes the New York Times claiming the play is “The most moving exploration of the theme of loss that the American theater has produced.” Assuming this quote hasn’t lost the word “Hardly” or “Not” from the beginning, it’s clear that something has gone deeply awry with this production.

It’s nice, sure. It looks completely competent – although actually it drags like nobody’s business – but most of all, in no way is does it really communicate a moving exploration of loss, least of all the *most* moving one produced by American theatre.

At such junctures, it seems fair to wonder if the production is to blame. This isn’t, after all, a transfer, but the first British production of the play. And it seems hard not to conclude that – assuming the New York Times isn’t given to insane hyperbole (which seems a safe bet) – it’s this production which has drained the text of whatever power it achieved in New York.

So I had a bit of a read of the script on the way home. Not an exhaustive one, you understand, but enough to notice the extent to which this production seems to run almost at a divergent right-angle from what the play seems to be trying to do.

In fact, the show that the script seems to describe – there’s another whole essay to be written looking at the Anglophone tradition of playwrights basically directing their plays themselves through specific stage directions, set descriptions and so on, but – would, I imagine, look a bit more like actual “directors’ theatre” than Sheibani’s production does.

And yet, by ignoring all this – stage directions, seemingly the tone of the play, perhaps the best way of making the dynamic of the text work – Sheibani’s production is actually total regietheater, albeit, a sort of British *stealth* regietheater which looks like it’s making a modest, serving-the-text version of the play.

I’m not sure why this interests/bothers me so much. Perhaps it’s the level of disingenuity I’m inferring. By creating a production in which no elements really draw attention to themselves, Sheibani seems to be “letting the play speak for itself” in the manner that we (the British) understand by that phrase (i.e. – there absence of “wanky” bells and whistles – there is a chorus, for example, but they’re dealt with in the usual, slightly embarrassed, understated we-don’t-know-what-to-do-with-choruses kind of way). But, in actual fact, has put on a production that almost amounts to a tin-ear for the dynamics of the play while dressing it up in such an unshowy manner that it makes it look like it’s all the play’s fault.

Now, none of the above is to say that I’ve had some massive Damascene conversion as regards “serving the text”. I still have a lot of time for productions of texts which might be said to “run against the grain of what the text appears to be doing”. Ultimately, I guess a play is only as good in the moment as any given production is making it, be that running in the same direction that the text appears to, or radically against it. Pre-conceptions of how texts *should* be staged still aren’t helpful, but once something seems not to have worked, it seems reasonable to investigate why that might have been the case.

Hope that all makes sense, and you can still get a sense of the play which, I fear, I’ve rather allowed to become a hostage to a wider question.

Might revise a bit, once the above has had a little time to breathe.
Posted by Andrew Haydon at 13:28

Good to have you back, and so prolific! (Although a little hard to keep up at the moment).

The New York Times quote on the back of the playtext intrigued me as well, so I looked it up. The full quote is: "Oh, yeah, and it may just be the most moving exploration of the theme of loss that the American theater has produced since the events of Sept. 11, 2001, although Ms. Ruhl began work on the play before that terrible day" - which is a bit different, but more bending the meaning than changing it completely, I suppose. My thoughts on the production here: http://benslittletheatreblog.blogspot.com/2010/05/eurydice-young-vic.html