A Thousand Stars Explode in the Sky – Lyric Hammersmith 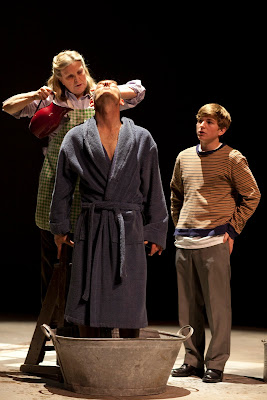 The big story with A Thousand Stars Explode in the Sky is that it’s a three-way collaboration between leading British playwrights Simon Stephens and David Eldridge and the playwright both describe as a personal hero, the playwright’s playwright, Robert Holman – whose work, perhaps because I’m not a playwright, I’m not very familiar with.

It’s an exciting proposition. Expectations are high. But, what are we expecting?

There’s something warm, relaxing, about the way the stage is tipped toward us and the lighting isn’t tightly confined to it; a comforting lo-fi aesthetic to the whole thing.

This continues as the action begins. A cancer ward symbolised by a single institutional strip light and a hospital bed. Two of the actors I recognise with pleasure: Nigel Cooke – the brilliant Kent from Rupert Goold’s King Lear and Harry McEntire – outstanding in Simon Stephens’s Punk Rock. The third, Pearce Quigley, quickly establishes that he’s more than equal to his impressive company.

It’s not immediately clear, but the style of acting is definitely up to something. There’s a kind of directness about it. It’s not like the performers are trying to suck you into listening to them by pretending that they’re someone else, somewhere else; instead it feels like they’re saying these words, written by these writers, and inhabiting them with charisma and saying the words as if they are true, rather than, trying to psychologise them.

There’s an availability about the words, about what they’re saying, that doesn’t seem like its necessarily trying to be passed off as “normal speech” or “how people really talk”, but it isn’t being done as rhetoric either. It feels quite new. It’s pretty exciting to see. I’m now talking about much of the first act. There keep on being these flashes of writing. Kind of these impressionist shafts of light.

The text doesn’t seem to be functioning in the manner we’ve been led to expect texts to function. We gradually become aware of possible shapes that the narrative is taking – there’s stuff about illness, about families, about death, about love, about history, about marriages, about generations at the end of the world when one thousand stars will line up and destroy the earth.

It’s kind of like watching the birth of the bastard child of British family dramas and magical realism while Ibsen, Chekhov and Brecht fight over the adoption rights.

And, yes, it feels like that’s the kind of sphere and company where this is aimed.

It is impossibly huge, big, gorgeous, hopelessly romantic stuff – played out through tiny details, in stark interiors by unglamorous folk.

There are great lines too. But looking at the ones I scribbled down on Wednesday night, it becomes clear that they’re great lines *for actors*. The words come alive in the context of character and situation, not because they’re inherently clever or funny. It strikes me that that kind of funny must be a lot harder to write.

And there are in-jokes. At least I think there are in-jokes, albeit pretty available ones. The appearance of a black Labrador recalls David Eldridge’s dog Rascal. The repeated references to herons are surely no coincidence. And, there’s a description of Eldridge’s alma mater Exeter as “a shithole filled with too many posh boys” (I paraphrase). It’s hard to tell if these are signatures or the other writers laying false trails as the provenance of different lines, or sections, or locations; because, for a collaboration, it’s very hard to see the joins. There are some lines or ideas that seem more likely to have come from one writer than another, but I wouldn’t swear to spotting a single one as a dead cert (and I’m flying blind when it comes to Holman anyway – is there a “collected plays” anyone could lend me?)


It’s a funny piece of work though. I suspect it’ll get a lot of flak in some quarters simply for not doing things which it isn’t trying to do. Put another way, I don’t think for a moment this is a failure to construct a naturalistic play *properly*. I don’t think the acting is just a matter of performers just not emoting enough. But this is a play that trades on and plays with deferred gratification.

It is unlikely that Stephens, Eldridge and Holmes suddenly don’t know what they’re doing. So I think we need to take on trust that what’s on stage is all intended to be as we see it. Perhaps the collaborative nature of the script opens a bit of room for doubt for some. But I don’t think that’s it. This is a very deliberate piece of work, directed in a very specific and detailed way.

It does feel strange saying all this in the review after Love the Sinner, but where that felt someone trying and failing to write a very specific sort of play – one which should function in a specific way, about which the audience are invited to hold certain expectations – A Thousand Stars repeatedly signals its difference from that form.

While it plays with well-worn tropes, at the same time, it feels like it is robustly exploring how they work; what they’re for; what they need and don’t need to keep functioning. Indeed, to an extent, this seems to be the ultimate wider game of the entire piece, both text and performance: asking again and again what a play needs in order to function as a play.

At the same time, the style of the performances seems to foreground the writing. The style of speaking the lines with a certain blunt, often Northern directness, illuminates the poetry of the lines alongside their humour and sometime acuity.

On the other hand, this style does affect a certain amount of remove. So, while we’re not being led in very obvious ways; while the narrative doesn’t really build to manipulative peaks and troughs; as an audience, the thing doesn’t perhaps strike us with the immediate visceral emotional response as the same material, the way the stories of the same characters might have done, if they’d been presented differently.

Instead this feels like a kind of emotional Brechtianism. Instead of thinking about social issues and politics, we end up ruminating on the nature of families, illness, life, death and love, but not necessarily *feeling* them so much.

On the other hand, there is an incredibly touching scene in which William Benton (Cooke), dying of colon cancer, takes off his pyjamas and stands in a tin bath and is flannel-washed by his aged mother. No one speaks for about five minutes. There’s just the sight of a frail-looking middle-aged man standing naked in a pool of light being washed and it’s incredibly moving.

The end is rather beautiful too, but it’d be unfair to say what it is or why.

Without the text for back-up (all theatres should have playtext programmes. Seriously), or sacrificing actually watching the play in order to take enough notes, it is nigh-on impossible to discuss this infinitely fluid, shifting thing in nearly enough detail. And it feels like trying to watch the details would be a rather perverse way of taking in the whole. Like trying to pick out and comment on individual lilies in a Monet. This is theatre as vast impressionist canvas. Perhaps not the best possible example of such a school, but while it feels like such a bold new direction, that it doesn’t perhaps attain perfection on its first outing seems hardly worthy of comment.

More like this, please.
Posted by Andrew Haydon at 10:36

I like the way you've approached this; it’s reinvigorated my thoughts about the piece. I kept wondering as to how deliberate an approach the performance style might be, wanting the performances to ‘engage’ more with the latent emotion of the writing ⎯ while all the time being aware, on some level (minimal, admittedly), that there must be something else at work.

It’s frustrating to think how hard-wired I’ve (/we’ve?) become, as spectators of largely realistic, ‘causal’ drama (when it comes to new writing at least) into always enquiring, ‘Where is this going?’ ‘Is this convincing?” when in this case, in retrospect, the kind of distant, even dispassionate approach they adopted has its own kind of beauty.

Robert Holman is a fascinating case exactly because - I would tend to agree with you - he’s viewed predominantly as a ‘playwrights’ playwright’. And yet over a career spanning about 30 years he’s always managed to have work produced: he’s been resident dramatist at the RSC, Royal Court, NT - pretty much everywhere you can be, to my knowledge; a few years ago (2004, maybe?) the Manchester Royal Exchange even devoted a short season to his work - largely at Simon Stephens’s instigation, I think. Given this consistency, it’s perhaps surprising that as far as I know there isn’t a modern ‘Collected Plays’ available.

One of the reasons why he’s been a bit off the radar in recent years (even though the Exchange produced a new play of his, ‘Jonah and Otto’ with Ian McDiarmid in 2008) might be because, generally-speaking, his plays tend to be real slow-burners. So far as I’ve read, they belong to a dramaturgical ‘school’ outside of what might be called the ‘plot-point’-obsessed culture that often has currency now. Which means he’s fallen out of fashion. As you mentioned, it’s very difficult to identify those moments drawn from a particular pen in ‘A Thousand Stars...’, but there is a kind of ‘ruminative’ quality which his work often has which permeates a lot of the scenes: testament as much to Eldridge and Stephens’s shared admiration of Holman perhps, as well as their own development. (I would quickly add to that that I am not identifying him as the major ‘architect’ of the piece by any means.)

Admittedly, some of Holman’s work now feels a bit dated (German Skerries, Mud); but of the plays I’ve heard recommended most often, and read/seen, I would suggest the following: Outside the Whale; Rafts and Dreams; Making Noise Quietly; Across Oka.

It’s interesting to note that all three writers have said (according to Lyn Gardner's piece last week) that their own work has been influenced, to some degree, in the light of this experience. Obviously, how far this will be in evidence in their respective future outings remains to be seen. But they might yet answer your call ⎯ which I would echo.

(I went on a bit there, apologies.)

Hi Edwin (& Andrew)
Interesting comment (and blog of course Andrew).
Just a small correction but credit where credit's due, the people that instigated the 2003 Exchange season were the directors Tim Stark and Charlotte Gwinner, and their idea was championed by Sarah Frankcom within the Exchange itself. Sarah directed the revival of Across Oka, Tim the revival of Rafts and Dreams and Charlotte oversaw the three readings. Charlotte directed the reading of the only unproduced stage play of Holman's in his long and illustrious career, A Moon Unusually Large, Simon Stephens directed a reading of The Overgrown Path and I directed a reading of German Skerries.
Thanks for such intelligent comments
David

As you say, credit where credit's due: many thanks for pointing that out, and I apologise for speaking out of turn!

(It goes without saying, congratulations on 'A Thousand Stars...')