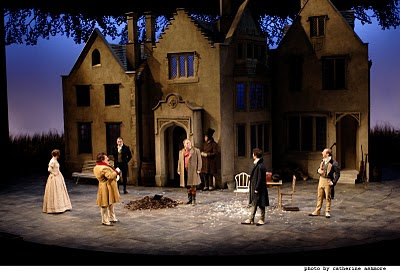 London Assurance is perhaps the nicest play ever written. It’s a mid-C19th confection that makes even Shakespeare’s happiest comedies before it and Wilde after look chippy at best and steeped in impenetrable gloom at worst.

On the surface it seems to have no grudge with anyone (apart from lawyers), the characters are largely likeable – or at least are rendered with such sympathetic charm here, that it’s impossible not to warm to them – with the exception of the lawyer, Meddle, and he hardly suffers in the same way as, say Malvolio. The play’s scenario – the planned execution a marriage dictated by a will – is hardly presented as the potential tragedy which it might have been. And while the characters do have stuff at stake, it’s a) very lightly worn, b) easily resolved, and c) resolved to everyone’s betterment.

There’s none of the cruelty of Twelfth Night, none of the fear at the heart of Much Ado, and none of the snippiness that underscores Wilde’s comedys. It also feels a damn sight nicer than any of the romps of the Restoration. Hell, it even makes Four Weddings and a Funeral or Love, Actually feel like Kafka or Conrad. Perhaps the only other comic plotter who comes close in terms of fondness for their characters, pleasant absurdity and painless fun is P.G. Wodehouse. Everyone else suddenly looks like they’re obsessed with tragedy and just tack on “happy” conclusions having tortured their audiences for the preceding few hours.

That the play feels this way is curious, because on pretty much all levels there’s potential for London Assurance (originally entitled 'Country Matters' - and plainly the NT should have changed the title back) to be rather troubling. After all, one of its main characters is a upper-class, fox-hunting enthusiast, her sometime suitor is a horribly affected elderly rake, while his son is a feckless one-man credit-crunch. There’s also a very strange sequence which seems to play entirely on a number of the characters’ apparent discomfort with Jewish money-lenders.

In a way, one wonders if this isn’t the stealthiest manifestation yet of Nick Hytner’s search for the Great Right-Wing play. There’s certainly much here to delight everyone from the Countryside Alliance to the Daily Mail.

And yet it’s a complete delight. Indeed, I only mention these potential ideological stumbling blocks upfront to forestall the saccharine gush which is about to follow.

The plot is the classic young lovers initially thwarted by circumstance situation, which seems to date back to the dawn of non-tragic drama.

The feckless Charles Courtly (Paul Ready doing an uncanny of Hugh Grant playing Edward Fox (a link worth clicking, for once) playing a likeable version of Prince Charles) returns drunk in the early morning to his room at his father’s house with Richard Dazzle (Matt Cross). Thanks to a series of misunderstandings and tricks, Dazzle is mistaken for Charles and manages to get himself invited to the country house of Squire Max Harkaway, to whose 18-year-old niece, Grace (Michelle Terry), Charles’s father Sir Harcourt Courtly (Simon Russell-Beale) is due to be married, thanks to a convoluted will made by her father, Harcourt Courtly’s best friend, which only allows her to come into possession of his land if she marries said friend.

So, Richard and Charles trot off to the country to escape Charles’s creditors. Inevitably, Sir Harcourt Courtly isn’t far behind, and so everyone winds up in the country together, with Charles pretending to be an entirely made up person who just happens to be the dead spit of Sir Harcourt’s son Charles. Of course, Charles immediately falls in love with Grace, his father takes a fancy to married friend-of-the-Harkaway’s Lady Gay Spanker (it’s a mark of the conviction with which this ridiculous play is being acted that this hostage-to-fortune of a name doesn’t raise a single smirk on stage, beyond the simple innocence of it hearty intentions), played with gusto by a game Fiona Shaw. Richard Briers even turns up playing her octogenarian husband, Adolphus, of whom Lady Spanker seems enormously fond.

There’s not a lot of point in relating the myriad twists and turns of the plot. If you’ve read any P.G. Wodehouse you can imagine the basics, but [SPOILER ALERT – well, sort of...] Dazzle and Courtly Jr. enlist the help of Lady Spanker to flirt Sir Harcourt away from Grace so Charles can make a play for her, albeit in disguise. Grace is a bit too bright for all this. Sir Harcourt and Adolphus nearly come to blows and then everything is suddenly resolved completely amicably with everyone proving remarkably considerate and generous.

And this is the strange thing. The plot really doesn’t seem to bear anyone any malice. Generally in comedies, you can get a sense of whom the author really likes by how the characters all end up, but here pretty much everyone seems to come out of the story happy and improved, with the exception of Meddle, the lawyer, who doesn’t come out of it any the worse for having been through it.

Indeed, there’s a rather touching scene in which Sir Harcourt Courtly suddenly has this vast moment of self-revelation and immediately reveals himself to be a kind-hearted, decent chap who just happened to fancy himself a bit before. It’s all incredibly light and sweet.

However, the real joy and generosity about this show is generated by the performances. This is, after all, a first-rate cast by anyone’s estimation (anyone? Really? I bet I could find people who’d disagree, but...) – at least three actors who are regarded as National Treasures in Shaw, Russell-Beale and Briers, one of the best, least-showy-offy and most unsung actors of his generation in Ready and the NT’s ongoing choice of quirky leading lady in Terry (previously the eternal love-interest in England People Very Nice), along with an exceptional supporting cast.

More than the theatrical starriness, which you can take or leave, it’s the sheer expertise and enjoyment flowing off the stage that really gets you: Simon Russell-Beale’s willingness to make himself look utterly ridiculous, his enormous eyes turning imploringly or imperiously upon the audience – kind of like a wounded-but-inflatable Frankie Howerd; or the way that previously-thought-of-as-frightfully-serious actress (Three Men and a Little Lady and the Harry Potter films notwithstanding) Fiona Shaw is basically having a tremendous laugh mucking about; although it’s perhaps Richard Briers’s brief cameos as the befuddled Adolphus Spanker that take the funniest-character-acting biscuit.

There’s not really much point in any analysis beyond that, although I’m sure some would be possible. And if one worried away at it for long enough, I’m sure one could make finding the whole enterprise fun quite morally suspect and theatrically recidivist, but for once that doesn’t seem all that important. Sure, it’s hetero-normative, status-quo-endorsing, reactionary twaddle, but it’s enormously comforting, generous-spirited and brilliantly performed, so why worry? 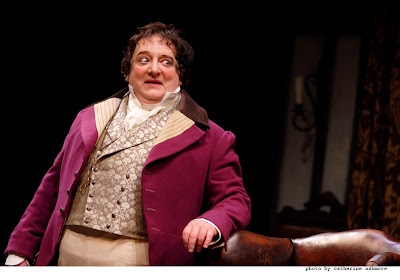 Sweet Christ, this is badly punctuated. Will try to amend when I've got half a brain...

I've been thinking about this since seeing the new Sherlock Holmes film. Perhaps there should be such thing as fun and such thing as serious thinking (in art as well as other things) and perhaps they should be allowed to exist fully and separately. Perhaps that's fine, and not just bourgeois hypocrisy.

Otherwise we will just be forever anxious about whether we're enjoying ourselves in a proper manner, but also whether we're funlessly overthinking everything. And as a result, neither will quite happen: our think-art will be sprinkled with signposted 'fun', and our entertainment will heave with trite moralism. Which happens all too often anyway.

In any case, I've become much more interested in comedies and entertainment in general. It suddenly seems like a much harder thing to do.

Thanks for commenting - and for the much longer follow-up piece on G.S.

I'm just about to wrtite-up yet another "happy" play, and hopefully, some more thoughts on the stuff you raise will find their way into that review. Otherwise, I guess I'll just have to add "how we watch plays" to the growing list on non-review think-pieces which I keep meaning to write.

BTW, have now added the link that contextualises the "Nick Hytner's search-for-a-right-wing-play" thing. There's also this curious article by foxhunting enthusiast Charles Moore, the former editor of Britain's most Conservative newspaper the Daily Telegraph, which perhaps gives more of an idea of what I mean when I say that enjoying the play does still somehow feel morally suspect...