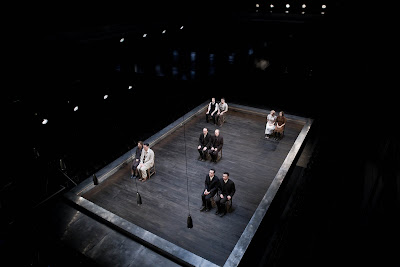 Tadeusz Słobodzianek’s Our Class examines what is still one of the most urgent, pressing questions facing modern Europe: what did you do in the war? Usefully, it examines the question in relation to Poland, and, more crucially, from a Polish perspective.

The British education system – or at least the one I grew up with – paints a very specific, Anglo-centric narrative of the course of World War Two. On September 1st 1939, Hitler invades Poland. Britain asks him nicely if he wouldn’t mind awfully not doing so, no such undertaking is received and consequently this country is at war with Germany. In Britain, Poland then vanishes from the radar, largely because, although we might well have declared war on Germany because they invaded Poland, we didn’t do a terribly good job of defending Poland, or countermanding the attack. Precious little is made, for instance, of the USSR’s subsequent invasion of Poland, 17 days later, from the east. Little figures in our history books about the appalling treatment meted out to the Poles by each side. The massacre of 20,000 Poles by Soviet soldiers in Katyn is passed over as are the thousands of Poles slaughtered by the Nazis.

Poland next crops up in the Anglo-narrative with the establishment of the concentration camps and their subsequent transformation into death camps in 1942. The suffering of the Poles in WWII is oddly abstracted in our history books. At the same time, the way that the Poles regarded their Jewish neighbours similarly goes largely unreported. Poland was an occupied country in which the Nazis killed the Jews, runs the official wisdom. At the end of the war, the way in which Britain, with the flick of a pen, carved off a chunk of Poland in the east to give to Russia, gave it a bit of Germany in recompense, and then handed the whole thing over to Stalin anyway, is reported as a masterpiece of diplomacy.

Our Class is set in the Polish town of Jedwabne before, during and after the Second World War. On the 10th July 1941 virtually all the town’s 1,600 Jewish inhabitants were rounded up by their non-Jewish neighbours and murdered. Most were burned alive inside a barn. Following the war, with Poland under Soviet occupation, the crime was blamed on the Gestapo and a monument erected to commemorate the dead.

The play starts in 1935 (although the programme suggests 1926). The ten characters are school children, classmates, in Jedwabne. They introduce themselves, play, muck-about, flirt and generally behave as children do. Time passes. The play is structured as “A Story in XIV Lessons” and played in-the-round on dark wooden boards bounded by a low aluminium bench, replete with modish under-seat striplighting designed by Bunny Christie. As such, the characters/actors never leave the school-room. The fact they were once in a class together is never allowed to disappear. Instead, the wooden playing space – under adept lighting from Jon Clark – becomes interiors, exteriors, wide-open fields, roads at midnight, pig-stys and Śleszyński’s burning barn.

There are advantages and disadvantages to this approach. Having a class of ten stand in for the entire population of a town and by extension Poland has its advantages dramatically. The small tensions can easily be understood as emblematic of the wider malaise. One childhood playground snub or taunt stands in for the thousand or hundred thousand such insults. On the other hand, once characters become such symbols, quirks of fate peculiar to them suddenly seem rather unlikely, when they’re standing in for a tenth of Poland. “What are the chances of that happening?” you wonder. It demonstrates both the power that they achieve as metaphor and the effect that becoming a metaphor has on particularity. By and large, though the play manages to handle these concerns.

The build up to the atrocity, littered with other acts, escalating from unkindness to barbarism, runs concurrently with the suffering and compromises being inflicted on the Poles (Jewish and gentile alike) by the Soviets. Here it suggests that it is Polish identification of the Jews with the Bolsheviks that gives rise to their increased prejudice, but the seeds of their anti-Semitism are already well rooted in the nation’s Catholicism. At the same time, the choice facing the Poles – to collaborate with whichever occupying force happens to have taken over or die – remain stark and impossible.

The staging is admirably straight-forward. There are no costume changes and few props, while the lighting design and stage – the cold lights on the dark wood and aluminium contrive to foreground the minimalism. The cast are excellent. While the acting is ostensibly psychological realism, it isn’t laboured or over-played. The pace moves too fast to allow for self-indulgence. This is also partly down to the style of the piece, which involves a lot of characters narrating themselves, their actions and what is happening to them. People take up each other’s stories from their own perspectives. It makes a nonsense of the theatrical maxim “show don’t tell”, but the cumulative effect of an unbroken but disputed narrative line – ten different versions of the same story – is an effective way of handling a subject that needs more than to just be acted out.

Being written by a Pole, Our Class allows perhaps less optimism than an external eye might have granted. This is a document of savage national self-criticism, unflinching in its accusations. It points at quislings and failures of heroism, it shows that – unprompted, unbidden – a townspeople took it upon themselves to commit mass murder. It doesn’t mark them out as exceptional. It allows for no excuses. Most stringently of all, it does not allow either of the Polish characters who offer refuge to Jews to bask in uncomplicated heroism. Instead, they are characterised by self-interest and still-lurking prejudice. At worst, the Polish connive with the state and with the church to wash their hands of any responsibility. This is a play as much about Poland’s anti-Semitism since the war as before and during. Undoubtedly Poland was a victim in WWII and beyond, but, Słobodzianek argues, no amount of victim status excuses these actions.
Posted by Andrew Haydon at 12:05