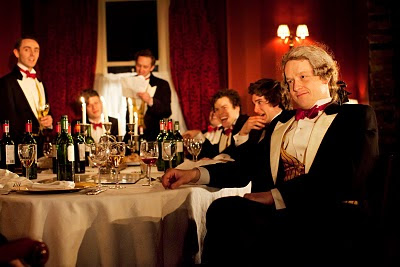 What with it following Off the Endz into the Downstairs space and seeing it the day after the lamentable Behud, I wasn’t really looking forward to Posh. On reflection, I reckon that’s largely down to all the pre-publicity I’d seen – not the theatre’s own, so much as the stuff in broadcast and print media – which had mulishly focused on how “in the run up to the election, Posh would be really, like, *relevant*, because David Cameron is, like, posh.”

You see, Posh focuses on the activities of an Oxford dining club not a million miles removed from the Bullingdon Club of which David Cameron, his shadow chancellor George Osborne, and his Eton contemporary and London Mayor Boris Johnson were members. From this one extrapolates the gloomy impression that one is going to be subjected to two and three quarter hours of heavy-handed lecturing about how Conservatives are Very Bad Indeed. Super for the political journalists who apparently decide what makes for good theatre (answer: “theatre that takes their articles and puts them in the mouths of actors on stage”), not so good for people who like theatre.

As it turns out, Posh is a rather excellent play.

An hour or so of it was performed three years ago in the inaugural Rough Cuts season and it’s interesting to see what’s been done to it since (as an aside, it’s also mildly terrifying to consider that, like Lucy Prebble’s Enron, it has been some three years and no doubt innumerable drafts in the making – so much for “overnight success”). As such, it is fascinating to get a small insight into the way that Wade has carefully, intelligently crafted strong raw ideas and situations into an impressively subtle bit of drama.

Perhaps the most striking thing about the play is its shape. Running at 2h45, the interval doesn’t come until maybe 1h45 in. And in this first half virtually nothing happens. No. That sounds wrong and it’s unfair. Things do happen, and there’s a fair bit of introducing, explaining and contextualising as well. For the most part though, aside from a brief intro scene, it’s just closely observed interaction between the ten members of “The Riot Club” assembling/assembled in the private dining room of a country gastro-pub.

The surface of the thing is constructed almost entirely from banter between the chaps; all turning phrases, cracking jokes and generally trying to better each other through verbal fencing or simple put-down. Beneath this, moving more slowly, is a wider power struggle. Through their showing off, the young men are trying to impress one another. Some to win any recognition, some to achieve presidency of the club, others simply exercise quiet superiority or just chunter on as the affable blunderers they affect to be.

It’s a bit like watching that game where you have to guide a marble around a maze in a box by tilting the surface over which it’s rolling being played. The power in the room lists and tilts this way and that. Never stable, never stopping. Allegiances shift as weaker club members ally themselves with old top dogs or emerging pretenders to their thrones, while those suddenly granted power sift through their supporters cutting those whose endorsement would lessen them.

And all this is achieved through ten blokes basically drinking too much, boasting and calling each other dickheads. Imagine a wine-fuelled Twelve Angry Men crossed with a pack of wolves and you’d be pretty near the mark.

While the script is subtle, acute, well-observed and intricate, Lyndsey Turner’s direction is never less than immaculate and is perfectly housed in Anthony Turner’s spot-on, detailed reproduction of a recently tarted-up back room in a country pub (which, importantly, is set slightly in from the sides of the pros. arch so that we see the height and depth of the theatre stage all around it). There are also some lovely directoral decisions – the best: three or four scene changes are accompanied by the boys singing á cappella/barbershop style covers of “gritty”, “urban” R‘n’B tracks.

This is a stroke of genius on (I assume) Turner’s part (i.e. it isn’t mentioned in the script, so I’m assuming it came from the director – do put me right in comments if it ain’t so). It pretty much tackles the other theme of the play head-on. Or at least challenges the implicit charge repeatedly levelled at the characters: that “the posh” are essentially “not like *us*” and, furthermore, are a bunch of charmless cunts with whom none of “us” would want to sleep.

By having them delivering R‘n’B *hits* (well, I assume they’re hits. I haven’t really got the faintest idea) with élan, charm and no small amount cool, and crucilally, delivering them in an idiosyncratic, “posh” kinda idiom, these scene changes – much more than the text of the play – offer a working suggestion as to how or why we might like or even admire “the posh”. It rips up the “chinless wonder”, “Tory boy” stereotype and replaces it with the other end of “posh” – the rake. The cavalier cavalier, if you like.

Indeed, the cast should figure on the New Year’s Honours list for services to The Posh. Along with the three non-U parts, the ten chaps are quite outstanding. The full line-up press shot did them a disservice, making them look like an identikit roll-call of Gap models. In fact, the play shows off ten very individual young actors each of whom is possessed of a frankly disgusting amount of talent, a great singing voice and oodles of charisma. Moreover, in terms of the play, they are all pretty much spot-on casting.

What’s most interesting about the play, though, is the possible disparity between what it might be trying to do, and what ends up doing. Put simply, the script levels some pretty blunt accusations at members of this privileged elite, from the opinions it puts in their mouths to the behaviour, both reported and seen, it attributes to them. But somehow it all seems strangely mitigated.

Let me explain: primarily, this is a play about young people and, despite its curiously long first “half”, the play in which a group of young people do A Bad Thing and then fall out is a pretty tried and tested model. It’s Trainspotting, Mojo, The Secret History, Shallow Grave, Spring Awakening, Saved, hell, it’s Macbeth, Paradise Lost or even The Fall of Man from the Garden of Eden. As such, we’re pre-primed to sympathise with those who commit the crimes. More than this, though, thanks to the combination of youth, what these putative poshos are angry about, and the fact that they’re played by good-looking, charismatic actors, the theoretical class resentment angle flies out of the window. I don’t think Wade intends anything so crass as trying to teach Royal Court audiences to hate the posh through a composite scenario crammed with a melange of plausible-sounding things that the hateable-posh might do or say. But if it was, she’d have failed.

The first problem is the actors’ charm (not to mention, yet again, talent and charisma). They’re actors. They’re all great on stage. Of course they’re likeable and watchable. You get the vague sense that if we really were watching the goings on of the Bullingdon Club we’d probably be more appalled. After all, theatre isn’t a fly-on-the-wall documentary, but entertainment (or an intellectual pleasure, or whatever). What it isn’t is an exposé. I don’t think that’s what the text is trying to do, though. It certainly isn’t what the production does. What with the set’s nod to acknowledging its theatricality, the R‘n’B scene changes and, well, the fact of sitting in a theatre, watching actors, we the audience are granted a good deal of remove to consider the implications of the staged dialogue and action within a wider framework.

However, that framework needn’t just be “the forthcoming election”, “privilege”, “the Conservative Party” and “David Cameron”. One of the things that struck me, watching the Riot Club trashing the pub back room was the extent to which it was simply the social class of these characters which is supposed to make the act seem theoretically despicable. After all, if this were a play about, say the Sex Pistols or Rolling Stones, then we’d probably be encouraged to view this youthful vandalism as “rock‘n’roll” rather than tut-tutting at it as the Daily Mail might.

Which brings us neatly to the next point of surprise. On one hand, I’m sure Wade did a fairly hefty amount of research into the viewpoints of those whom she purports to depict. On the other hand, what’s interesting about the dialogue is how many similarities there are between the snobbery of these Old Etonians (&c.) and the sorts of things one hears either verbatim or equivalents-of from London’s leftie arts crowd. The Riot spit the words “Daily Mail” with the same distaste as a Guardian reader might, for example. The only real difference we’re invited to notice is that these young posh types also have a lot of money and, theoretically, power.

Except that they don’t have power. Ultimately this is a play about what powerlessness does to people. It’s both telling and accurate that these young Conservatives satirically use the language of the politically correct to describe their plight as disenfranchised outsiders. Elite or otherwise, they are, after all, very definitely a “minority”. While these characters might think they’re taking the piss by whining about how they are discriminated against and bewailing violations of their human rights, if we imagine this play was called “Black” or “Jew” and contained the same level of disobliging stereotype – even if mitigated by charming actors – well, you start to see their point. And the play also points out that while they wield a lot of theoretical power, consider themselves above the law, and to some extent are seen to get away with their crimes, one is also made acutely aware that this power of theirs is both limited and compromised. There are situations in which their “social rank” won’t protect them – two of the characters describe being mugged and all seem acutely aware that much of the rest of the country wouldn’t piss on them if they were on fire.

As such, the play offers a kind of unsympathetic sympathy. On the other hand, thanks to the factors I’ve mentioned, I found the ending (which I shan’t reveal, but might well be guessable) oddly cheering. I know I wasn’t meant to. It’s meant to be chilling, I think. But behind all the class stuff, it feels like there’s something even more fundamental going on. A kind of punk spirit. A Clockwork Orange for the upper classes. Sid Vicious’s My Way sung in the Queen’s English. Something about our tendency to side with underdogs. The same sort of thing that makes Shakespeare’s Richard III so attractive.

Spat back onto the pavement of Sloane Square on a gloriously sunny, plane-free Saturday afternoon, Posh left me – quite wrongly, I imagine – with a massive grin on my face. The real achievement of the play, beyond the simple pleasure of watching a great production, is how much this reaction simultaneously worried me. Posh is a lot cleverer than it likes to let on.

I thought that this was an excellent, thought-provoking blog and very much enjoyed reading it. I almost wish I'd read it before I saw the play, but now that I have done I'm in a position to agree with many of your views...