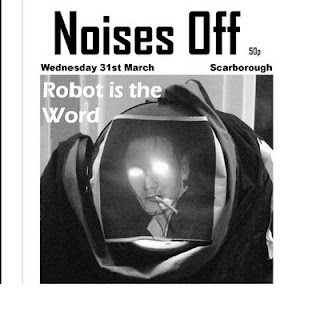 Ok, yes, even by this blog’s recent standards, this has been a bit of a hiatus. I shan’t bore you with excuses/reasons and have learnt better than to say the situation is definitely going to improve for sure from here on.

I suppose I should start posting my Time Out reviews here if only to prove I’m still alive and working as a theatre critic – hell, I might even bung up the whole archive at some point, just for the hell of it.

That said, aside from proper commissions or massive irritation, the other thing guaranteed to get me writing is the National Student Drama Festival. Oddly, as becomes clear from the below articles, I wasn’t actually at the Festival this year due to ill health. As a result, I ended up writing more for the Festival’s magazine Noises Off than I do when I am editing it. And, as I say in a couple of the pieces, it actually gave me a really useful outsider perspective on how the magazine reads to those not in Scarborough – and prompted me to urge those writing for it to address different concerns.

Having said that, I’ve no idea how usefully they’ll read in the wider context of the blogosphere, rather than as dispatches from my sick bed to a magazine which I wished I’d been more a physical part of.

I’m going to contact the writers of the pieces to which I’ve responded in my articles for permission to reprint theirs below my, well, attacks on them. But until such time as they say yes or tell me to bog off you’ll have to make do with the quotes.

(“Cover image” courtesy of my hilarious colleagues who decided that in my absence, there should be a “robot replacement” Andrew Haydon for the Noises Off Office (Noffice), which they then photographed and put on the cover (see Wednesday’s article). Ok, I admit it, I was hugely flattered)
Posted by Andrew Haydon at 13:35

I was just perusing your blog and saw this post - you're more than welcome to post up my original column if it will make sense to the readers of your blog. Would you mind popping a link to my blog underneath?

Do you have the Word file? Or is it copy-and-paste-able from your blog? I think I looked and couldn't see it there.

Yes, of course, to link-to-yours. I've been meaning to add your blog (and Jon Brittain's) to my blogroll and write a "new blogs on the block" piece for absolutely ages, but other stuff seems to keep overtaking it ever getting written.

If you have got an emailable version of the thing I was responding to, do send it - andrew_haydon at hotmail dot co dot uk.