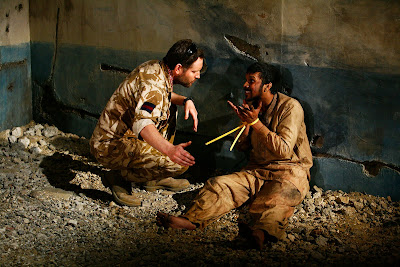 The Empire is a misleadingly huge title for DC Moore’s four-men-in-a-room scenario, but it offers a pretty clear statement of intent. Set in Afghanistan in 2006 (although it might as well be now), it gives us Gary, a corporal in the British army; Hafizullah, a stoned Afghan National Army recruit; Simon, Gary’s Captain; and Zia, a man captured in a recent engagement, who turns out to be from Wanstead Park and may not may not be a Taliban fighter or a kidnapped Briton.

As such, you can see how Moore envisages this thinly drawn empire – Britain’s imperial past, its class system and the way these all echo in our current conflicts are embodied by these four men, neatly encapsulated by corporal Gary’s pithy reduction of 200 years of British history to: “thick cunts, led by posh cunts, hitting brown cunts.”

However, the real business of the play itself is the hour and a half real-time encounter, played in detailed naturalism, mostly between Gary and Zia. It’s worth noting at the outset that Joe Armstrong went down with tonsillitis at the weekend, so he’s being played by John Game, on book. Game does a pretty impressive job for someone who’s seen the show a couple of times and had maybe a half a dozen shots at the part, so everything else might possibly need to be read in the light of this.

The basic problem with Moore’s script – and perhaps this got laid a bit more bare than necessary with the late substitution – is that the dynamic between Gary and Zia doesn’t really work. At least not in Mike Bradwell’s otherwise impressively detailed production. It feels like Moore has a written a script that is far more packed with comic potential than has been tapped here. At one point Simon refers to Zia as “Ali G fucking… terrorist”. The problem is that here that insult seems to arrive from thin air, whereas actually it sounds like it is the missing key to what’s gone wrong with the dynamic. It feels like Gary should be played by a reasonably frightening Tom Hardy type: pretty resentful, pretty racist, and pretty violent – one of those people who is a bit scary even when they’re being friendly – while Zia should be a much more mouthy, funny, wideboy version of a London Asian. Perhaps it’s to Bradwell’s credit that they’re not so obvious, but a bit of “obvious” would have perhaps made for a bit more drama.

But even with this revised casting, I’m not sure Moore’s scenario quite carries an hour and a half of dramatic material. The basic question, once we discover Zia is British, is whether or not we believe his story that he was kidnapped. Perhaps it’s daft to make character judgements based on actors playing people who are made up anyway, but it never really seemed likely for a moment that Nav Sidhu’s Zia was any kind of a Taliban fighter. But then, it’s not especially plausible that Game’s Gary is a member of the British army either (any more than Armstrong’s looks). I suppose that’s a problem with naturalism – it’s always done by actors. But even so, I reckon there are actors out there who would have made this situation seem a lot more fraught than it felt last night in the Theatre Upstairs.

Moreover, it feels like all the characters are functioning in a strange sort of information void. I suppose it’s a function of the four (plus one walk one extra) hander, but here it seems like a) there should be more people running about, b) that everyone on the ground should know more about the situation, and c) that there are a lot of chases deliberately not being cut to. It feels like neither Zia nor Gary have watched the news more than twice in the past nine years. Both seem impossibly ill-acquainted with stories about British Muslims fighting with al Qaeda or the Taliban in Afghanistan.

You can kind of see the play Moore is after. Two British men, one white and working class, one Muslim and working class, from neighbouring parts of east/North-east London meeting in a bombed out ruin in Afghanistan and trying to work out if they are, or ever were, on the same side or not. But even this back-of-a-postcard summary suggests pretty much why I’m not especially convinced it’s a play that really needed to be written – let alone taking the title The Empire into the bargain. It also includes at least two of “those speeches” which tend to crop up toward the end of such plays that Never Happen In Real Life, where a character suddenly sets out their whole socio-political stall in a lengthy monologue.

What there is is pretty neatly executed, if a bit dull. It’s perfectly competent play, too, if a little unnecessary. By the end, one isn’t really any the wiser as to whether Zia is or isn’t a Taliban fighter, nor has one had any real insights into the nature of modern warfare, the British army or what we are or are not achieving in Afghanistan. I suppose as a portrait of a confused, confusing war seemingly stuck in a stasis of stalemate one couldn’t ask for much more. As a piece of theatre, though, I might have preferred it to do *something*.