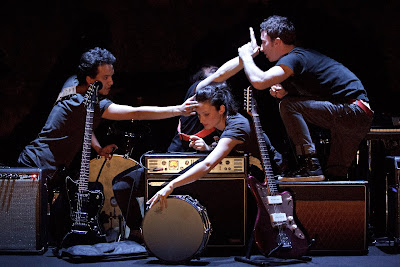 I suspect that the Gate Theatre’s Micro is going to get rather a lot of people in a tizz. Or at least it would, if it got the attention it deserves.

The problem is this: by conventional British rules, you’d be hard-pressed to call this “theatre”. And yet it’s in a theatre! Created by French choreographer Pierre Rigal, who made the excellent Press for the Gate back in 2008, you might expect this to be the usual “but it’s dance, really” objection. But it isn’t. Yes, Micro contains some “movement”, but what it most resembles is a gig, or rather an extended jam session, or perhaps a postdramatic, new wave reincarnation of those shows that Anonymous Society used to make.

As propositions go, it’s an intriguing one. Rigal has collected together four extraordinarily talented multi-instrumentalists-cum-dancers, stuck them in black band t-shirts (the Ramones, Joy Division, Aladdin Sane-era Bowie and plain black, since you ask) and essentially created a band as much as a piece of performance.

The piece starts with a wall of their equipment being gradually, invisibly moved, pushed forward, turned on and switched off. Hands appear from behind the amps. Leads are plugged in and the amplified buzz of exposed jacks fills the air. It feels and sounds like an imaginary Heiner Goebbels/Kraftwerk drum’n’bass collaboration or Stomp for post-punks.

The strangeness doesn’t stop there. Once out from behind their amps, the performers do a kind of dance scraping electric guitars against each other mid-air, while another performer pretty much fits himself into a bass drum with only his legs protruding and stomps about the stage like a disgruntled troll. It’s like Dada meeting Stockhausen in a very confined space. Some of it is very funny and rather charming.
.

Gradually the wackiness recedes and the music – proper identifiable songs, no less – begins to dominate. There’s still a good deal of physical, as well as musical cleverness on display – at one point the performers pair off and between them each play two two-handed instruments using one arm each per instrument (if you see what I mean) – but from quite near the start it seems to be much more about the music.

And this is where there’s a slight problem. The movement is nice enough, but it’s hardly relentlessly, rigorously choreographed, while some of it is just people clumping around or throwing shapes that are barely evolved from ‘music and movement’. I’ve got a lot of time for the school of non-dance dance, or just “being” on stage, but this isn’t always an entirely successful mixture of the two.

The music is better, although this is obviously a matter of taste. Happily, Micro’s taste in music seems to dovetail neatly with my own. Aside from the hints at Kraftwerk and Stockhausen, an enjoyable aspect of the piece is the simple trainspottery joy of trying to work out what bits of various songs you’re being reminded of. It basically flits between the cooler end of French pop from the Sixties and the more angular end of post-punk/and early eighties guitar’n’synth – think The Cure or perhaps John Foxx-era Ultravox.

There are also suggestions of Bowie, Bauhaus, the Clash, Penetration, Joy Division, Interpol, Editors, Throbbing Gristle, Serge Gainsbourg, the Divine Comedy, Neu, Air, St Etienne, Nouvelle Vague, maybe Brigette Bardot and definitely Laibach. Regrettably, there are also worrying stretches of stuff more akin Yes or Spinal Tap. At least that’s what I heard. I’m sure other audience members could come up with a similar comparisons referencing completely different bands (I’d be fascinated to read any in the comments section below if any of you do happen to see it). Anyway, some sort of noise is a constant from the get-go and, like the movement sequences, more time might profitably be spent on the dramaturgy of the segueways.

The piece bills itself as “an experience that tries to capture the different poetries of a rock concert and which... attempts to hear but also see the music”. This comes across quite clearly even without recourse to the programme. Oddly, it’s pretty much the sole discernable “point” or “narrative” in the piece. Actually, its “a-narrativity” (ok, I just made that word up) or the quality of, uh, postdramatic-ness isn’t a problem here. After all, who watches gigs for a story?

That the performance is most like a gig does a lot to mitigate this sort of complaint – also raising some interesting questions about oft-repeated received wisdoms (repeated, not least by me, recently) about how things/bodies “automatically” become “symbolic” on stage. They do here too – *sometimes* – but at other times, because they’re doing pretty much exactly what people do onstage at gigs – i.e. playing instruments – and are no more symbolic or “readable” than those on stage at an open mic night or drunks at karaoke.

Indeed, it’s striking that the “gig” bits of the show are in fact the points at which it becomes most apparent how comparatively sealed off and hermetic the performers/performances are compared to those stage presences of their real-life counterparts (i.e. actual bands). And so, curiously, it is in the very act of *doing* that the performers become most like performers, with all the allied sensations that they are “playing a part”, that the person we’re watching playing the guitar isn’t *really* the same as the person playing the person playing the guitar.

Due to the myriad variables mentioned above, it’s kind of hard to tell whether this show will ultimately be bought into by avant-garde music fans, upstream theatre types, the Live Art crowd (unlikely: there's no bleeding or nudity at all) or yer contemporary dance aficionados. I’m pretty sure it won’t do the same sort of business as the more crowd-pleasing Press, but that’s not to dismiss it. Its problem is/might be that it walks perilously close to that most damning of lines drawn by the British mind: the suspicion that it “might be a bit wanky”. Mostly it’s charming and playful enough to shrug off such charges, but there are definitely moments where you’re not sure whether it’s walked over the line into self-parody or even self-indulgently not-caring-about-being-wanky.

That said, I was much more in favour of Micro before it offered an extended encore after the audience had applauded it at what seemed to be the end. Of course it’s part of the lexicon of a gig, but not, of course, of theatre – at least not like this. Also, encores at gigs tend to be for the song/s that the band has been teasing everyone by not playing all night – and the number chosen for this encore would never be that song, I fear.

However, to an extent, my individual bone-picking and carping should be pretty much regarded as an irrelevance. I do think that with an even better band and perhaps tighter choreography the piece would be stronger, but that’s not the point. The point is that – well, at least in my experience – this is an exciting step into virgin territory. Well, I’ve never seen it done before, and as genres go, I think it’s one that deserves a good deal more exploration.

From Cartoon de Salvo’s recent much maligned Pub Rock to Chris Haydon/Mick Gordon/Billy Bragg’s Pressure Drop, putting bands on stage seems to be a bit of a vogue at the moment. And – not that I’ve even seen the other two examples of this spuriously-cobbled-together “trend” – this certainly appears to be the most formally innovative and inventive.

For that reason alone (although I did really like a lot of the music) I reckon theatremakers should be sitting up and taking notice of this little show, because, even if they disagree with individual decisions taken by the creative team, it seems like a show that’s worth thinking about, being inspired by, and taking into account when making future work. It’s the first show I’ve seen in ages that feels like it’s asking a few questions about performance, what to perform and how to tackle performing it. It’s the first show I’d be interested in seeing a scratch night of “responses to the work” for ages, too. It’s also mildly terrifying that we live in a theatre-critical culture in which this sort of work will far more likely be ignored for “not counting as theatre” than engaged with, but that’s theatre criticism’s problem, not the Gate’s. What the Gate have commissioned is a brilliant idea, irrespective of something so trite as whether you actually *like* it or not.
Posted by Andrew Haydon at 12:47