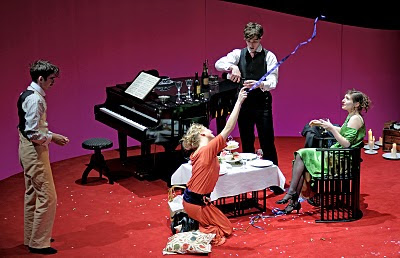 It’s not hard to see why Arthur Schnitzler seems to exercise more of a hold over the British stage than pretty much any other German-language dramatist, with the possible exception of Brecht. Who hardly counts as ‘popular’. A purveyor of mildly pervy tales now lent a veneer of respectability thanks to their increasing antiquity, dismissed by Hitler as a “Jewish pornographer”, he’s an almost ideal candidate for delivering arty European exotica for intelligent audiences who wouldn’t ordinarily admit going to see “relationship dramas”.

I should probably note at the outset that even on paper this was always going to tick a huge number of boxes for me. A Mittel-European text (written in 1895, it’s Austro-Hungarian, since you ask), directed by an “international” director (Swiss-Jewish Luc Bondy who works in France as a “German director” and in Germany and Austria as a celebrated director of French stuff like Marivaux – his production of Genet’s Les Bonnes is still in rep at the Volksbühne), and best of all, it’s on in London (or was. It closed last Saturday).

What’s most fascinating about watching it here, performed in English by British actors, is seeing what does and does not tessellate with the rest of our domestic theatre scene and where these disparities spring from.

Perhaps the most noticeable thing about a re-staging of Liebelei in this context – an English language version (by David Harrower – whose translation/adaptation doesn’t sound like he was terribly sure what he was doing) with a “foreign” director – is quite how little “relevance” there is to this strangely shaped drama.

Apart from being preternaturally preoccupied by sex (apparently he kept a diary which he told about every orgasm he had for a number of years), Schnitzler was also quite the keen social critic. It turns out that the main theme of Liebelei is, in fact, class. As such, Fin-de-Siècle Wien offers an even more rigidly stratified system than that of contemporary Britain. The thing is, you’d be hard pressed to spot it here unless you were really up on the period’s specific social codes and signifiers. What would be more obvious to a German-speaking audience is that the names of the two girls, Mizi and, to a lesser extent, Christine, would immediately have pegged them as the social inferiors of their dilettante lovers Fritz and Theodore.

However, it doesn’t occur to Bondy, in common with the work of most German directors I’ve seen, to deploy that simple, crucial British signifier of class: the accent (apparently accents don’t carry anything like the same weight in German-speaking countries, and Austrian accents are themselves considered slightly rural and ridiculous in metropolitan Germany. As such, Mizi and Theodore, Christine and Fritz all speak like pre-Waugh bright young things, so there’s precious little to point up what is in fact the crucial issue of the drama. It’s gettable, but certainly not as a central point of the play. A British director would have heavy-handedly gotten, oh, I don’t know, whoever today’s Martine McCutcheon is, times two, and put them opposite, well, probably the two actors who are playing Fritz and Theodore – then at least the contrast would have been tangible.

Still, it’s enjoyable seeing British actors negotiating a more German school of playing. It ends up as a kind of mid-North Sea compromise not dissimilar to Polish acting – some of Germany’s restraint and stylisation coupled with elements of Anglophone/Russian psychological realism.

So what of the play itself? The basic narrative of Liebelei (perhaps better translated as Little Crushes or Small Loves – rendered originally as Flirtation, or by Tom Stoppard’s 1986 adaptation as Dalliance) introduces us to young blades-about-town Theodore and Fritz. Jack Lasky’s Theodore is a reckless, wired young thing, with a proto-punky shock of hair and nervy disposition. He’s dating Natalie Dormer’s Mizi, a seductive bottle-blonde, erstwhile shopgirl glamourpuss (a dead ringer for Sheridan Smith from where I was sitting). His friend Fritz (Tom Hughes), the straighter, quieter, more artistic army reserve lieutenant, is dating Mizi’s similarly reserved best friend Christine (Kate Burdette).

The first scene amounts to little more than lusciously staged revelry – hints that Fritz and Christine are only just getting together, that Fritz has been carrying on an affair with a married woman, and the clouds that hang over these unions are barely essayed at all. Instead mostly it all looks like a lot of youthful drunk fun.

Thus, the tone of the second and third scenes comes as something of a surprise. Instead of retaining the light tone, everything gets very overcast very quickly. The scene changes from Theodore’s decadent pad to Christine’s Spartan room in her father’s house, where she is being lectured by her shrewish neighbour Katharina (an excellent caricature drawn by Hayley Carmichael) about her reputation.
. 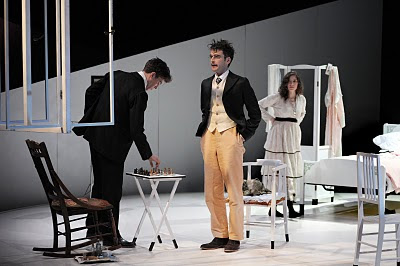 Christine floats about, agonises to Mizi about having fallen in love with Fritz, worries that he prefers this married woman he’s been having an affair with, and generally pines until Fritz turns up to say goodbye to her. His affair has been rumbled and he is to fight a duel with his mistress’s husband. A duel almost certain to end in his death. We know this, Christine doesn’t. From this performance, none of us are that certain whether Fritz really means it when he says he loves her.

The final scene [spoiler alert; but since the London run has finished, and the last production before this one was 24 years ago, you’re probably safe reading it – unless you’re going to see one of the mainland tour dates] shows Christine waiting for Fritz to come back “from his father’s estate” (his excuse), and then falling apart when she’s told that he’s been killed in a duel. Nothing else. The text doesn’t play any of the metaphorical/theatrical tricks of Reigen (or La Ronde, as we tend to know it), it’s simply a study of crashing sadness. We watch someone crying, howling, and railing at the world while her friends and family look on absolutely powerless to help, unable to say anything that could possibly provide comfort or even answers.

It’s a very strange shape and trajectory for a piece of drama, but its sheer unexpectedness makes it all the more powerful. It’s pretty visceral at the time, if rendered slightly theoretical by Bondy’s cool, mildly abstract staging – still halfway between that post-Brecht, semi-V-Effekt where we’re asked to think not feel. Ultimately, this is stylish, art house stuff and not the delivery of thumping melodrama. I remember thinking as the house lights went up that I’d enjoyed an excellent night in the theatre. However, coming back to put the finishing touches to this review, the sensations have faded, so I’m left with the feeling that this was a nicely presented production which might not have quite hit all the notes that the script makes available. In many ways it bears direct comparison to Katie Mitchell’s NT production of Krankheit der Jugend in November last year. Same city, similar epoch and the same curious failure to achieve resonance. Not that resonance is the be all and end all of theatre, but it’s curious all the same.

These plays are about the romantic travails and failures of the young and idealistic. If anything, it’s the gulf between their romantic idealism and our own cynical times that makes the most noise during these productions. ‘Imagine people willing to die for love!’ we briefly marvel, before going back to being sensible, having lived vicariously for a couple of hours.
. 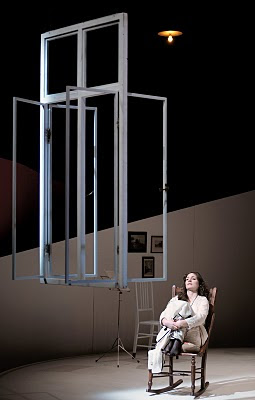