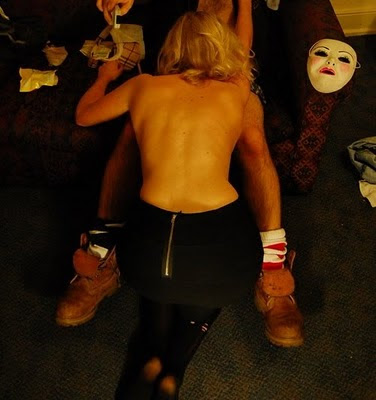 Hrumph. Having been sub-headed “And he doesn't like someone else today” yesterday (it really wasn’t “dislike”, just a few questions, really), and with a plea out to the Tech team to build a robot Andrew Haydon on the grounds that “our early prototypes have all gone horribly wrong, savaging innocent Festgoers who have submitted perfectly pleasant and well-meaning articles to the magazine” it’s clearly time for something different. Just as well, since Noises Off is getting to that stage where it is much harder to disagree with most of it unless one has seen the shows/discussions/queues that are being written about.

So, instead, tonight, I’m going to wax gutted. If I was at the Festival, instead of sitting in bed listening to Strauss’s Elektra and writing this article, I’d be sitting in New Hall watching Ravenrock’s production of Phaedra’s Love. And I’m rather sad that I’m not.

By weird coincidence, I first heard of Phaedra’s Love at my first ever National Student Drama Festival. This was 1997 and the play had premiered only the year before in London. As a student at Leeds – also, by weird coincidence, the alma mater of Ravenrock – and, prior to NSDF’97, one with only a passing interest in theatre, the play had naturally passed me by completely. Phaedra’s Love was the brief answer to one of the quiz night questions. The question was “What play opens with the stage direction, enter Hippolytus wanking into a sock?” (or words to that effect – I’m pretty sure it wasn’t the correct stage direction). That’s about the only thing I remember about that quiz night. But, for some reason I was completely hooked on the idea of that play, so I got someone to write down what it was and bought it as soon as I got back to Leeds. I remember reading it and being as non-plussed as I was excited. Was this good, or was it a bit childish, petulant and foot-stampy when it came to dealing with God?

It wasn’t until I saw the play performed, again by students, in Cambridge in 2001 that I got more of a perspective. Dan Shearer’s production probably still ranks in the top ten student shows I’ve ever seen. It was also pretty much the diametric opposite in terms of how it tackled the text, judging by the photos and reviews of Ravenrock’s Phaedra’s Love. Where Ravenrock sound (from the reviews) and look (from the photos) like they’ve really gone for the visceral, Shearer’s take on the text in Pembroke College’s white-walled cellars was witty, post-modern and cerebral. In fact, it remains pretty much the most German thing I’ve ever seen a British student produce.

Hippolytus was played by an incredibly beautiful young Asian man who wasn’t in the least bit fat. The pre-show state consisted of a data projector showing photos of pop icons such as Darth Vader and Mr T with the caption “Are these not great men?” (or something). The cast wore mostly white and donned fluffy angel wings when they died. Not one drop of stage blood was spilt, and I don’t remember anyone taking any of their clothes off. At a key moment, one of the female members of the cast, wearing fluffy angel wings, climbed up a step ladder, sat at the top, and played Leonard Cohen’s (well, Jeff Buckley’s version of) Hallelujah in its entirety. You get the picture. But, yes, to get to the point, I’m gutted not to be seeing another production of Phaedra’s Love (one which one of my colleagues has just emailed to say I’d have really liked. Bugger again).

Being away from the Festival has had the useful effect of focusing my attention on the reviews far more closely than when I’m editing the magazine. The process is very different, in fact. Rather than scanning quickly for a sense of tone and rather more carefully for grammatical hiccoughs and casual invective – having of course seen the shows for myself – now I’m away from the Festival, I find myself reading for nuance. Seeing how much I trust a writer’s opinion by how they justify what they’re saying or the confidence with which they say it. Even textual clues are seized upon. Are writers flogging themselves to explain something quite dull, or so fired up that their words are tumbling over each other to get out?

Phaedra’s Love is the first time I’ve really picked up on that sense of excitement, this year. The other stuff sounds good, but like stuff I might have seen before, like stuff that the other reviewers might also have see before. Phaedra’s Love sounds like it’s of a different order altogether. The size, the scope of imagination; it sounds like something that could only have been done by students (or Alan Lane) and it sounds fantastic.

It’s at times like this that one starts to yearn for a bit (a lot) more detail. How big was the band? What were the songs they played? How was the sex and violence handled? Was it gross out, genuinely squeamish, comic, horrific? Of course, selectivity is perhaps the reviewer’s most important skill. And writing for Noises Off, you’re generally in the position of knowing that virtually your entire readership has already seen the same play that you saw. Except, it’s still crucial to explain to them what it was that you believe you saw. As the disparity of opinions on every show in this magazine goes to prove, while everyone might be looking at the same stage, not everyone is seeing the same thing by ay stretch of the imagination.

It’s also interesting to note the intersections and divergences between commentaries. Reading Tuesday’s set of Phaedra reviews, it is amusing to note, for example, the way that male reviewers’ syntax seems to fail them when attempting to pin down the appeal of Rachael Shaw’s Phaedra, who – reading between the lines – sounds like she might actually have managed to pull off being sexy on stage. A feat infinitely more difficult than you might imagine, btw.

Conversely, perhaps the most interesting of the reviews is Henry Ellis’s discovery that he doesn’t really like Sarah Kane’s plays. Thanks to his admission that he’s only seen one production each of only two of her five plays, the real curiosity is – is it the productions or the writer? Could different productions have uncovered the ‘human element’ that Ellis has found lacking, or are these productions par excellence of a writer he definitely doesn’t get along with?

I can’t say how much I am looking forward to reading the second tranche of reviews. But, more importantly, I am immensely grateful to everyone writing them for reminding me about one of theatre criticism’s most vital functions: reportage. Telling people who aren’t there what a thing is like. There are people outside the festival who aren’t seeing the work and as one of them, I am very thankful that I’m you are writing about it. That said, theatre is ultimately a live medium, so the sentence that cheered me up most in all the reports on Phaedra was: “I think this show... has a future beyond Scarborough should the company wish it.” Well? Go on. Please?
Posted by Andrew Haydon at 13:02