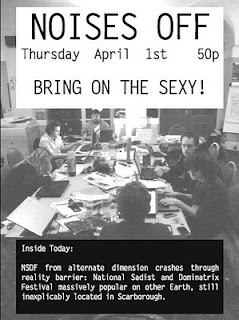 ‘And yes, Andrew, Rachael Shaw’s Phaedra actually managed to pull off the difficult feat of being sexy on stage.’ – Ben Curthoys (Noises Off 31/03/10, p.12)

Why should this be? The simple answer is twofold. Firstly, the stage tends to make stuff on it symbolic as well as/instead of literal. It distances audiences from ‘the real’ (which is pretend anyway), but allows the pretence to stand in for much wider “realities”. At the same time, the game of naturalism is partly to “suspend disbelief” – to make audiences forget that they’re sat amongst N other people and that what’s happening in front of them isn’t framed by black boxes or curtains. As such, sex constitutes one of the most jarring possible things to attempt to stage, because, well, not to put too fine a point on it, there are certain preconditions for sex that involve some pretty “real” things.

Theatremaker and thinker Chris Goode has written about an outstanding example of the problem on his blog Thompson’s Bank of Communicable Desire: ‘On the night I saw [the then Oxford Stage Company’s Cleansed] something notable happened: in the scene where Grace and her (dead) brother Graham make love, Garry Collins as Graham, on removing his clothes, had a hard-on, and it was still in evidence at the end of the scene. Afterwards, talking in a cafe with friends who’d also seen the performance, I made some flip-sounding remark about Collins’s dick having been the best actor in the play, and I think everyone cringed a bit at my being so crass. But it was true, in a more profound and heartening way than I managed to articulate at the time. In the midst of all this performing, all this simulation, all this misconceived playing-at-extremity, there was this momentary realness, uncontrolled possibly, but showing everything else up as a kind of bourgeois party game, suffocating in the tiny airlock gaps between non-tessellating “theatrical” conventions.’

But this also gets to the heart of the problem. As soon as people start faking sex on stage, at least in a naturalistic production, either one becomes acutely aware of the faking, or, more rarely, becomes anxious that the couple on stage really are *doing it*, which would be even more odd/distancing/alienating. Or, as above, one becomes acutely aware of where the “real” interferes with the pretending.

There’s also the peculiarly British preoccupation with embarrassment in regard to both nudity and sex; even to ‘being sexy’. Niamh Conway’s Phaedra review captures it perfectly: ‘a ripple of awkward giggles can be heard throughout the audience as the comedy borders on being crude’. Crude! In Britain! Imagine. No wonder the poor audience giggled nervously.

Thanks to an exchange programme for “young” critics, which I took part in for a year between 2007-’08, and various international festivals I’ve attended since, I’ve been lucky enough to see a lot of work from mainland Europe. One of the most striking differences between them and we Brits is the treatment of both the body and sexuality on stage. Across ten-plus festivals, I saw copious, largely unremarked nudity and plenty of representations of intercourse. I don’t think I saw a single “warning” sign, though.

The three best examples were French-Canadian Dave Saint Pierre’s Un Peu de Tendresse Bordel de Merde!, Franco-Austrian theatre provocateurs Superamas’s Big 3rd Episode: Happy/End (not actually a good show per se, but interesting for its treatment of naked bodies on stage), and French choreographer Gisele Vienne’s astonishing I Apologize. This last piece – admittedly more “contemporary dance” than “theatre” as we British might pigeonhole it – contained some of the most sexually graphic material I’ve ever seen on stage. Performed solo by a woman who didn’t even take off her clothes. Instead it was just the execution of choreography that suggested some of the most violent and transgressive sex you can imagine.

In Britain, this sort of material tends to get shunted into the box labelled “Live Art”, rather than being allowed to exist as “theatre” as it does everywhere else in mainland Europe. But even “straight” theatre in Europe has a more mature attitude to nudity and sex on stage. I remember my first encounter with this at the Edinburgh International Festival in Alize Zandwijk’s production of Gorki’s The Lower Depths back in 1999 – at one point a fairly overweight man wandered onto the stage completely naked and amused himself for a while, well, essentially stretching his cock and letting it ping back. This went on for a good few minutes while he carried on with the dialogue. It contrasted very poorly with the British student shows still chucking in a glimpse of embarrassed undergraduate willy as a nod to “shock tactics”.

As if to prove nothing much has changed on the mainland, the last show I saw in Berlin – Deutsches Theater’s production of Brecht’s Mr Puntilla and his man Matti – had what initially looked like some fairly gratuitous toplessness for one of the female characters. At least, it looked a bit gratuitous until the man who’d underdressed her came back onto the stage stark naked and stood, unembarrassed, for the rest of the scene. The effect was intentionally comic, but through absurdity rather than embarrassment.

Of course there are still politics around asking someone else to take their clothes off so a whole bunch of third parties can see, doubly so when the audience is composed primarily of your peers. But it sounds like this source of prudishness is being firmly stamped on by this festival’s generation of students. And not before time. We’re about thirty or so years behind the rest of Europe in the maturity stakes. It would be good if we could catch up in the next decade or so. Then we might start in on thinking a bit more intelligently about representation on stage more generally, but we’ll save that issue for another day.

For final advice, lest we’ve all gotten a bit carried away by all this talk of nudity and pretend sex, we should turn to Phoebe Alexandra Bourke’s Tuesday article The Torture of the Talent Crush: “This suitor on whom you have been focussing for around 90 minutes, on whom you have been basing your hopes and dreams, does not exist. He[/she] is a character constructed by playwright, moulded by actor and staged by director.” Quite right.
Posted by Andrew Haydon at 13:07