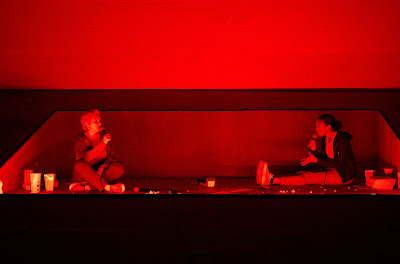 It’s not “perfect,” whatever perfect means, but it is brilliant.

Nina Segal’s text feels like exactly where English-language playwriting should be right now. It is writing in the lineage of Martin Crimp’s Attempts on Her Life and Fewer Emergencies, Caryl Churchill’s Love and Information, and Escaped Alone, Sarah Kane’s 4.48 Psychosis, Alice Birch’s Revolt, She Said. Revolt Again, which is to say, it is reminiscent of some of the best writing for theatre ever committed to paper. And, Dan Hutton’s world première production of it is about as sure-footed and intelligent as you could wish to see.

I have two and a half reservations, which I’ll get out of the way now, before going back to how good it is. 1) Re: “not perfect” – there are occasional words in the text, or moments of staging, which, because the rest is so seamless, do jar slightly. A word doesn’t quite fit the idiom or rhythm; some of the performing is allowed to get a bit “acting”. But no matter. 2) I wasn’t quite sure about the dramaturgical shape (both text and production). It feels a bit explainy at the end. I think this could have just been a false sense I got from it, but I’d have been interested to have seen “The Explainy Section” somewhere else, and perhaps played down, or offered differently. But maybe I’m completely wrong about that. It wasn’t that it didn’t work, I just got interested in what it would be like if something else happened instead. 2½) The play feels pretty American (although, just back from Slovenia, I’d have also accepted ex-Yugoslavian or Russian), insofar as: Britain really doesn’t have a plentiful supply of guns*. But that’s it. And those are basically just quibbles rather than fundamentals which get between you and the play.

The form of the play is a dialogue, dialogues, between “One” and “Two” (here played by Jesseye Romeo and Debra Baker, both whom are fantastic). The dialogues are numbered. Segal’s stage directions suggest that these performers are in on an empty stage hung with “a vast array of brightly coloured plastic guns” (although concedes that they might not really be there). Designer Rosie Elnile places the action in and around a 40° raked black stage, with a shallow bunker cut into it. This stage is mostly either drenched in red darkroom lights (really lovely, understated lighting design by Katherine Williams) or else is in darkness, lit only by torches held by Romeo and Baker.

The dialogues are often more that sort of group narration, made most famous here by Attempts on Her Life. A kind of argumentative dialectic tumble to get at the events. Elsewhere, also á la Crimp, they’re sort of negotiations of what *things* are like. And occasionally, the performers seem to snap out of their storytelling reveries to panic about the man with a gun who is in the room with them.

What Hutton’s done with these dialogues – as befits a founder member of Barrel Organ, and a great loss to criticism – is to put them in the space, make them speak to us, create a sort of hint at an imagined post-apocalyptic cinema (– probably the one from which the rest will be familiar to us; Big Guns opens with One and Two watching us through eighties 3D glasses, popcorn in hand, and scattered all around, toxic-pink milkshakes at the ready), but always be in the room with us, even if, at times, they seem to be in their own little world. As is normal with a text of this sort, it never once feels “definitive,” but is sensible enough not to seek to be. I mean, there’s no theoretical limit on the number of Ones and Twos there could be. Certainly nothing that suggests they’re both women. And nothing whatsoever that dictates it must be these two women in particular. Romeo and Baker do feel like canny choices, though. Between them, they have a surprisingly “everyman”-ish quality for contemporary Britain.

And the dialogues themselves, Christ! Big Guns is possibly the best evocation of life with the internet I’ve yet seen, surpassing, say, Wastwater or Love and Information, by a very comfortable margin. There are two strands of its fractured narrative in particular – the story of Ike and Kay and their interior décor blog, and Leila with her make-up tips YouTube channel – which, in the moment, feel like they capture almost everything about the sleepwalk-into-catastrophe of modern life. While they preen and pout, they are slowly unravelling, becoming psychotic themselves, while outside in the darkness, or maybe even in the corner of their rooms, the already psychotic stand in wait. Perhaps there’s even a suggestion that it’s Ike who’s murdering Leila. It’s not clear, but the confusion feels exactly right. Combined with a perfect soundscape (and sound design) by Kieran Lucas there is an edge of Sci-Fi horror to the whole, like a particularly spooky, spoken word version of Doctor Who, perhaps (that’s a compliment. If it doesn’t sound like one to you, ignore it). Actually, the sheer artistry of the production design here probably merits a whole review of its own. It is *SO GOOD* to see hand-held microphones being used, nigh-on continuously, with such intelligence. Little disturbing tweaks are made here and there, so sometimes words seem to repeat and echo disconcertingly, when one of the performers reports something a man has said, we hear his voice created with a pitch-shifter speaking under the performer’s own. And at one point there’s a properly chilling coup which I won’t spoiler (but think Midnight). And, throughout, there is this sort of symphony of white noise, sometimes sirens, sometimes something like a Whitehouse record, sometimes resolving almost into a growing crescendo of actual music.

I’m loathe to wade into the stupid waters of “gender,” re: the piece – but it does maybe feel like Big Guns has a useful insight into a “female” experience of the world, that I don’t associate as closely with, say, Crimp’s Attempts... (even despite the absent woman at its heart – perhaps even because of? There is certainly a feeling that it looks *at* Anny). And this feels like an unabashed *Good Thing* too. (“Why, thank you, white, male critic!”).

But, yeah. This is the sort of exciting new work by young people that makes this job worth doing. Bright futures all round. (Assuming the play’s less-than-sunny outlook isn’t too prescient.)


*This sense is particularly compounded by the recent “terrorist” attack on the Houses of Parliament, farcically undertaken with one car and two knives. What could be more English? Or more doomed to failure? (I know some people died, and more were injured, but come on, who really felt terrified by something that amounted to no more than a traffic accident, followed by a nasty fight in a pub. Like magic, terrorism requires a sense of “how did they do that?” It also requires a sense of ongoingness. So, yes; complete failure as terrorism.)
Posted by Andrew Haydon at 19:55