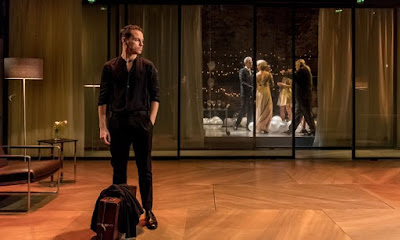 [I’m going to talk about the whole thing; for the benefit of people who won’t get to see it, for posterity, and so I don’t forget anything I loved in the future. There will probably be spoilers]

Robert Icke’s new production of Hamlet for the Almeida is beautiful.

Hildegard Bechtler’s design is simple, minimal, and modern, with maybe a slight hint of those Scandinavian BBC4 box-sets (chiefly The Bridge and Borgen) that have re-awoken the British ability to sit through four hours of something with only a couple of loo breaks. There is a simple corridor of parallel glass walls upstage, and an elegant Nordic-looking corner-sofa downstage right. There is an expensively tasteful floor lamp, and a couple of chairs which come on and off as required. There’s also a CCTV monitoring desk, and panel of large televisions which rise and fall from the flies. Natasha Chivers’s lighting mostly has a cold pale glare to it.

This isn’t just a modern-dress Hamlet. As with his translations of Oresteia and Uncle Vanya, Icke has unshowily cleaned up Shakespeare’s early-modern English; trimming and re-wording where the passage of 400 years has rendered words or phrases obsolete or impenetrable. (So long, “chalice for the nonce.”) The effect is one of complete comprehensibility (even if “fardels” does make the cut). For a four-hour show (inc. two fifteen minute intervals, endearingly spaced thus: 1hr55, 35mins, 55mins), and one which normally features at least two and a half characters whose chief characteristics are wind-baggery and tedium, this feels a remarkably lean Hamlet.

The cast of this Hamlet must be one of the best ever assembled. Still in the afterglow, I’m pretty willing to say this has absolutely the best Ophelia I’ve ever seen (Jessica Brown-Findlay, unrecognisable from Uncle Vanya or Oresteia), the best Polonius (Peter Wight), and definitely the best Claudius by a country-mile (Angus Wright). Juliet Stevenson is a revelation of quiet understatement, reaction and “truthfulness” as Gertrude. Hell, it probably also has the best Guildenstern (Amaka Okafor), the best Reynaldo (Daniel Rabin) and far and away the best Gravedigger (Barry Aird). And even those I’ve not named above have also apparently erased my memories of anyone else I’ve seen ever playing their parts, suc h was the strength of their characterisations.

The chief virtue here is the meticulous unpicking of all the bullshit stage convention baggage that the text has picked up over the centuries. Take Ophelia, for example. You know how she’s almost always a whiny drip with the most insanely irritating voice in the universe? Not here. Brown-Findlay behaves exactly as you’d imagine a posh girl at the beginning of a relationship with the heir to the Danish throne would behave. She’s credible and steely. Nothing is overplayed. The rapid pace of the thing means we never really dwell on what’s happening to her. She’s quickly bundled into this plot to spy on Hamlet by Claudius and her father, Hamlet has his suspicions from the outset, they have a row and her reaction – anger and shame – is etched all over her face. His injustice and her culpability sit irresolvably side-by-side.

Similarly, Peter Wight doesn’t do a single one of Those Polonius Things That Actors Do. He’s like An Actual Person. As if Icke sat down with a red pen and crossed out every last one those agonising Theatre Laughs. The thing you realise, sitting down to write about it, is that all these characters also resist the usual simplistic adjectival filing. You can’t say Wight’s Polonius is “ponderous” or “tedious” nor is he “bluff” or “businesslike” instead. He’s like the man he is. Wight’s not playing a rag-bag of tics and contrivances, he’s a man in a room with a situation to deal with and the way he’s going to deal with it happens to have been written down in 1599. It seems simple when you say it out loud; but if it’s so simple, why does it happen so rarely?

And, again, Angus Wright – I’m pretty sure I have seen Claudiuses who have “downplayed the villainy” before, but this version leaves those others at the understatement starting gate. He’s sympathetic and charismatic; a decisive leader and a loving husband. Wright also has the blessing of an amazing voice and is strangely beautiful – one of the most endlessly watchable and plausible actors there is.

Similarly – Christ! – the way that conventions of scenes are laid to waste... Too numerous to name them all, but, the way the gravedigger scene (for example) is basically played completely straight is just glorious. They say what felt like most of the words, but in ways that I’ve never seen or imagined them played before. The scene isn’t just one of those appalling things you wish they’d cut, but instead this almost completely new idea, fresh insights, quiet, reflective sadness...

[I’m sure some other productions – possibly ones I didn’t see – might have done some of these things before. The above simply reflects how it felt watching it last night.]

The greatest virtue of Andrew Scott’s Hamlet is – how to put this? – the strength of his character trajectory. Of course his performance is electric. Of course. At first glance it’s more or less precisely what you’d expect when you’re first asked to imagine Andrew Scott as Hamlet. We know his voice, we know how he acts. He’s one of those actors whose cadences feel instantly familiar. And “right”. But there’s so much more going on here than just “Andrew Scott giving his Hamlet”. As you’d expect from a production that rigorously redefines the Hamlet rulebook, there’s an acute psychological through-line here that makes fresh sense of every word in the play.

It is striking to me that the last Hamlet I saw on stage was Katie Mitchell’s in Ophelias zimmer. One of Mitchell’s on-record impetuses for making Ophelias zimmer is her intense concern that Hamlet is a) a misogynist, and b) that this misogynist is allowed to stand as a towering anthemic hero of angry depressed manhood. While I wouldn’t argue that that reading is certainly available, I think Icke and Scott mount a sterling case for the defence against it. Scott’s Hamlet is emphatically not heroic. Gone is the brilliant vulpine swagger of David Tennant’s reading (which I adored too, btw). Here instead is a thoughtful person who in-the-moment is a reactive victim of circumstance. A person who is allowed to be complicated.

What feels different here is that Hamlet isn’t – and isn’t even pretending – to be on top of the situation. If you think of all those Hamlets you’ve seen who are all dashing and courageous and somehow admirable... Scott is instead far more fully immersed in himself and in his situation. His Hamlet is not fronting anything out. He is utterly miserable. When he sees the ghost of his father, his performance cuts through all his talking to the fact that HE’S JUST SEEN THE GHOST OF HIS FATHER AND OMFG. If there is something noble about this Hamlet, it’s that he has the strength not to try to pretend he’s feeling any better than he is. He’s actually a lot more honest. Indeed, his reassurances that he is “mad but north north-west” feel much more like someone trying to weigh up the disparity between still being able to string a sentence together and behave normally and the maelstrom of mental illness that they are also suffering. It feels to me like an incredibly acute portrayal of what being Hamlet might actually really feel like in the C21st.

The saddest moment of all, though, is the point in the wordless duel – beautifully underscored by Dylan’s ‘Not Dark Yet’ – where Stevenson’s Gertrude drinks the poisoned glass of wine. The looks between her and Hamlet, her and Claudius, and Claudius and Hamlet, are where you suddenly see that everyone has lost. Wright’s Claudius looks hollowed out by grief – loses the will to live, let alone “win”. What would be the point now? What would he have won? And Scott’s Hamlet sees all this. And knows, somehow, that his time is also nearly up. Indeed, it looks like the only victory is Gertrude’s. She at least pulls together some agency and decisive dignity in an impossible situation. Even the way the killings happen feels new, intelligent and contemporary. Hamlet barely scratches Claudius, because that’s all he needs to do. It’s not a dramatic finale, it’s a sad, resigned, human moment.

There are Hamlet’s ideas. Obviously. Tonnes of them. Quite a lot of Hamlet is Hamlet telling us his ideas. In Scott’s portrayal they seem to tumble out of his mouth, out of his brain; disordered, unfinished. Works-in-progress, half-ideas. He trails off from unfinished thoughts, turns declamations into throwaways. And the decisions about what is what always feel sharp and accurate.

But there are also our ideas. The process of watching this Hamlet for me felt, in part, like a series of “Ooh! They’ve done That! They’ve stopped doing This like That! Ohh, That’s Very Clever...” For Four Hours. And it does make you think. Mostly about the play, and about the situations in the play. (A couple of nice touches – Guildenstern is now a black woman that Hamlet used to have a thing with. She’s now seeing Rosencrantz. This works beautifully with the text, and adds a few new neatly observed amusing moments. It also makes Claudius’s apparent inability to tell tall, white, beardy, male Rosencranz from short, black, female Guildenstern much funnier than the usual tedious Theatre Laugh gag.)

I didn’t feel any especial contemporary parallels being drawn out. And – unusually for me and Hamlet – I didn’t feel some sort of wild, lurching over-identification with the protagonist (it’s nice to think at 40 I might have grown out of my Hamlet phase). No. This is simply, a very sad story about some people in Denmark. Where this production draws its metaphysical extra dimension from is from a rather dizzying feeling of this living act of theatre connecting you tangentially with 400 years of culture, and the fact of just how good it is. It’s an odd thought, but possibly the things that [the vast majority of] last night’s audience seemed to experience most strongly collectively were pride and gratitude. Which, God knows, have been in especially short supply for the last eight months or so.

For all its contemporaneity, and intelligence, and deft little touches, this is – you could say – something like a very “pure” Hamlet. There’s no grand concept except maybe: “people might have been doing this play wrong for quite a while”. The production doesn’t feel like some monstrous regie-intervention (which would also have been fine with me, btw), but rather an intelligent, astringent clean up job. If this Hamlet feels new, it’s because you can see things in it clearly again, like the whole thing has been scrubbed and exfoliated, or sandblasted, or something.

[I seem to have got through this entire review without mentioning the watches, or that one scene Michael didn’t get (and if I’m honest, I’m not especially sure I came up with a particularly good rationale for how that scene worked myself. It just didn’t bother me much that I hadn’t). They were there. I saw them. I appreciated them. Maybe they’re the thing I won’t spoiler. Maybe the former, and also the penultimate scene with the dead bodies, ascended – aptly enough – to some sort of Wittgenstein Tractatus 7 plane.]

So there we have it: beautiful, brilliant, sad, ideas.

A quietly thrilling, fiercely intelligent Hamlet for the modern world. And maybe also something that we can hang on to and cherish in these horrible times in which we live. 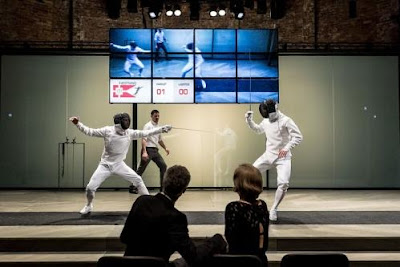 Thank you for such a considered account: you have brought many things to my attention.

We at least saw the same play which many of the broadsheets appear to have missed.