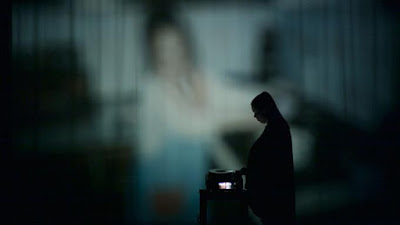 It opens with the five performers standing on the black stage, silhouetted in front of slide shows from the five projectors next to them – a kind of analogue cross-fade collage of autumn leaves, old family photos, world heritage sites, pictures from the history books...

“I wish I was a dog” says one of the performers, the not-quite-characters. He just wants to be taken care of. To have food and shelter provided. To be loved and to be charming enough that when he makes mistakes he can just hide his nose under his paws and be forgiven. For this he will endure small children shouting in his ears and pulling his fur.

Žiga Divjak’s The [Person] Who Watched The World (Človek, ki je gledal svet) gradually turns out to be a non-stop, two-hour devised miniature-epic of globalisation. In the first scene we meet a Chinese family – a mother and father’s touching memories of how they met, etc, are quickly superseded by descriptions of their daily work routines in a factory sewing clothes, of their concerns for their childrens’ futures, and a description of their return to see their parents and children on their annual holiday, and how their concern over school grades poisons this rare time with the family.

Knowing nothing about the piece except the running time beforehand, you settle quickly into the engaging storytelling mode, and perhaps anticipate two hours about inequities in the lives of Chinese factory workers.

Then, in the next scene, a (I assume) Slovenian woman outlines her dread at her 40th birthday party, freezing the action and talking us back through her adult life; asking, really, when was I supposed to have children during any of this? It’s not showy, or flashy, or overly dramatic. At all. Indeed, its a conversation that feels almost farcically familiar across “Western” Europe too. There’s an admirable lack of self-pity, though. Merely the simple, practical questions of “When?” “With whom?” “Paid for how?” while the concepts of a stable career, or even job, are whittled away to nothing.

In another scene (the next one?), a son sits next to his father and describes the events that lead up to his (the son’s) suicide. They are Indian cotton farmers. They are mis-sold vastly expensive genetically modified crops. They take out loans to pay for the crops. They take out loans to pay for the insecticides that – contrary to the sales pitch – are vital. The crops fail anyway. They take out a further loan to buy more seeds, because these GM crops are sterile. The crops fail again. The son has put his family in so much debt that he kills himself. His neighbours kill themselves. An entire eco-system falls apart. The clear-sighted analysis of precisely what is wrong with this system is horrifying.

In another scene (the next?), we meet a Syrian activist who is online, encouraging his friends to join the revolt of March 2011. It will be like the Egyptian revolution, but better, he tells his friends. The events escalate. The first day, four people are shot dead by the police. The world is watching, they say, surely now they will intervene. On the second day eight people are shot. On the fourth or fifth day, 58 people are shot. By 2016, 470,000 have been killed. Again, it’s so simply stated that your stomach lurches at the sheer horror of it.

And we’re reminded, by being in the theatre, by watching these white European actors, also by hearing stories about the way in which our labour conditions are being abused, by watching actors doubtless wearing jeans ‘made in China’, by being aware that as we watch a play there are people being bombed. It’s not underlined. It’s not histrionic. It’s not preachy, and nor is it condescending. You’re just gradually told a lot of stories, and you know that these are things you already knew, but (if you’re anything like me) you don’t really like to think about and are pretty good at avoiding on a daily basis. As a statement on Western privilege it’s immensely powerful, and, sure, within “The West” (of which I guess Slovenia is now a de facto part) there are also hierarchies, within every country, there’ll be people exploiting other people; but on top of all that, there are demonstrable levels of comfort here that don’t even begin to exist elsewhere. And that these things are interconnected is unarguable. It’s not even contested. So, yeah; as a result, it’s not an easy watch by any means.

Theatrically, it’s very simple and unadorned. For the China scene a table of five sewing machines is wheeled on, for the Indian family, there are just three chairs. For the monologue (mostly) by the childless 40-year-old woman, there’s just a mic stand, and the cast stood around being the rest of her family. The slide-projectors return to the stage a couple of times, for surprisingly effective lo-fi visual theatre interludes, and there’s even an intriguing, one-off scene in which three actors enter the stage clad in white bio-hazard type suits and seem to spray or paint a blossoming tree of some description.

There are more scenes, quite a lot more, but these are the ones that really stayed with me. Overall The [Person] Who Watched The World is a remarkably effective piece about the modern world, about what “globalisation” really means. And what was perhaps most fascinating of all for me (as a soon-to-be-Brexited Briton) was just how much the UK and Slovenia now seem to have in common economically. I mean, think about that for a minute: 27 years ago (or; for the first 14 years of my life) Slovenia was a part of non-aligned Socialist Yugoslavia; now its young people (even middle-aged people) have almost exactly the same work/life issues as their peers in London or New York, and built on the same exploitation of workers in the developing world.

The authors of texts are the creators of the show [or: “devised by the ensemble”]