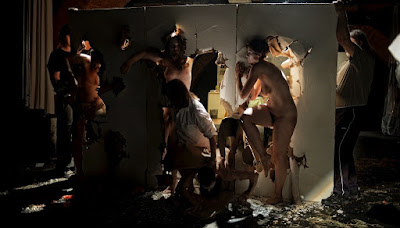 Playing directly after Our Violence, Your Violence, Sebastijan Horvat’s We, The European Corpses (Mi, Evropski Mrliči) sits almost diametrically opposite Frljić’s creation. Starting life as a text-for-theatre by Simona Semenič (leading Slovene playwright), and marking veteran director Horvat’s directorial debut(?) at Mladinsko, it is a piece that essentially explores the futility of political theatre. Apparently it takes a lot of inspiration from the work of Srečko Kosovel, the Slovenian constructivist poet of the 1920s, who was inspired in no small part by Marinetti and his fascist futurism. You can almost hear it in the title, which sounds like a particularly gloomy Death in June record.

Apparently, Semenič’s text is about the life of a Slovenian woman who fought as an anti-fascist partisan in WWII, and then shows her life gradually decline into one of drudgery and domestic violence after the end of the war. (Like some Slovenian version of Plenty!) This part of the piece plays out silently at the rear of the long narrow cellar-like stage in a fully detailed, naturalistic set. In front of this – well – all hell breaks loose, basically. The rest of the n-strong cast start out dressed as if refugees from various stock, iconic, “revolutionary” plays. They strike poses as loud music in the Tarantino mode plays; I take this to be irony.

On a spring day in the academic year 1998/99, in the big theatre lecture hall of the Academy of Theatre, Radio, Film and Television (AGRFT) in Ljubljana, a platoon of directors and dramaturgs, together with their professor Jovanović, was creating an inventory list of professional competencies. The proposed questionnaire included a category of role models and idols that an artist simply must have. “Who are your role models and idols?” asked professor Jovanović. The dramaturgy student Simona Semenič immediately responded: “Monica Lewinsky!” Jovanović was agitated by the answer: “No joking, let’s get serious, if you intend to screw around we might as well go home right now!” “But I am serious,” replied the unperturbed Semenič. “Sometimes it truly takes balls for the appropriate and satisfactory oral support to come through to the most intimate and most vulnerable macho region of the president of the biggest imperial power.” Jovanović stared at Simona Semenič, as if the ultimate educational phrase would fly out of his mouth, but he couldn’t find it – all was silent. If not before, it was probably then that he realised the times truly have changed. Times are always a-changing. Sometimes for the better, sometimes for the worse. Such are our feelings. “What do you think, Simona?” he was in the habit of asking. Dušan Jovanović was her professor and Semenič spoke publicly on several occasions about how much it was possible to learn from his creative theatre suggestions and his drama analyses.

One of the agents that inhabits time as an occupier is fashion. Fashion is convinced that it knows the most about a certain time. That it manifests a time, so to speak. Fashion is the militant and invasive economics of time and, in 1975, on the invitation of Dominik Smole, the artistic director of Mladinsko, Dušan Jovanović, as an intentionally mischievous derivative of the then still popular partisan meetings, made a drama of its cold vocabulary: an inventory of military fashion through centuries, Victims of the Bang-Bang Fashion. It was this performance that announced Jovanović’s entry to the post of the artistic director of the Mladinsko Theatre, which he and his colleagues turned into the most important theatre chapter of the previous century around these parts. On the 60th anniversary of our theatre, Simona Semenič, undoubtedly the most radical Slovenian playwright, will paraphrase Victims of the Bang-Bang Fashion to create a new drama text. A performance will be created.