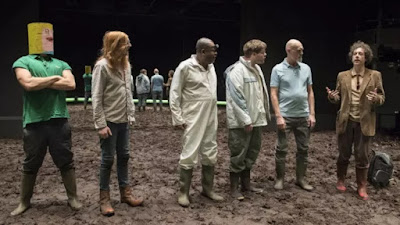 Set on a muddy promontory, Joe Hill-Gibbins’s Midsummer Night’s Dream promises to be, well, wintry. As it turns out, it’s a bit more complicated than that.

I guess it’s one of those We Need To Talk About “Europe” productions, which David Hare warned us about. As we all know, Hill-Gibbins has been to Berlin, and liked what he saw. And we’ve seen the various fruits of his thefts in his Changeling, his Edward II, his Measure For Measure, and now his MSND. I disliked (what felt to me like) the superficial borrowings in Edward II intensely, and adored the immediate regietheater sugar-rush of Measure For Measure. This Midsummer Night’s Dream sits between those two extremes.

The set is by Johannes Schutz who after Polly Findlay’s Ghosts in Manchester I was ready to swear was a complete genius who could do no wrong. His work here is a useful reminder that even geniuses can’t be brilliant *every* time. It is essentially a shallow field of mud in front of a mirror. It’s a fine, evocative set for A Midsummer Night’s Dream; but it’s hard not to wish it were on a bigger stage. Now, if it were on the stage of the Barbican, or even just somewhere like the Lyric, then we might be talking, but this is the smallest and most constricted I remember the Young Vic feeling for years. Of course, *that* might be the point. But, as with much else here, it’s not an enjoyable point in itself, and the making of it isn’t done with so much flair.

So what do we need to say about “Europe”? Simply this: that Britain is finally making something recognisable as contemporary theatre is wonderful, but – just as in “Europe” – some shows will still be better than others.

Moreover, I wouldn’t even say what we have here is “full Europe”. Or maybe it is, but not the bit I find exciting. I mean, it’s pretty much The Play. It’s not even The Play as a comment on anything very much except The Play. I mean, The Play includes much on Gender Relations (and the caprice of fairies) and so The Production. Comments. on Gender Relations. And it doesn’t say awfully much that we haven’t also seen said elsewhere about The Play, to be honest. Much of the same ground was covered in Nick Bagnall’s Liverpool Everyman version a couple of years back, and there’s always the shadow of Filter’s magisterially funny (and intelligent) MSND looming over productions now.

The biggest idea here is contained in the ending, where the insupportable melancholies of the drugged Athenian lovers, the abducted Amazonian bride, and drug-raped Titania bleed into a kind of wild apocalypse, where the membranes between the fairy and human worlds appear to break down altogether and Bottom and Hippolyta seem to somehow re-find each other, as Oberon/Theseus’s patriarchal tyranny is thwarted. Set on this sort of muddy battlefield, it all feels a bit 1960s, in an odd way. A sort of ‘All You Need Is Love’ on the charnal house of the Somme, or something. But, try as I might, I couldn’t quite make it resonate strongly for me in early 2017. I had a good long look at the mud, and tried to get something out of that, maybe mixing in the blue and yellow costumes of the lovers, as pastel stand-ins for the colours of the Ukrainian flag, but nothing doing. If that was the point, it could certainly have been made more strongly. Or perhaps this is simply two hours illustrating a maxim that Pat Benatar managed to sum up in five minutes.

I guess it sounds like I’m being overly harsh here. There are some fine, fine performances: Michael Gould unexpectedly recalls Matt Smith with his mercurial clarity, Anastasia Hille maybe telegraphs her emotions a bit too emphatically, but you can at least see precisely what her Titania and Hippolytas are up to. And the mechanicals play at the end is probably the try-not-to-laugh funniest I’ve seen*, thanks particularly to the efforts of Geoff Aymer (Stout/Wall) and Dougie McMeekin (Snug/Lion), as well as Matthew Steer’s brilliant patronising Eng.Lit. student director, Peter Quince. Leo Bill’s Bottom is unexpected, but – particularly in Ass mode – genuinely unsettling for having discernible emotions as well as animal lusts and physical deformities.

What I did love about this production was its unsentimental urge to destroy the play, though. It clearly shows, repeatedly and almost pedantically, that there is almost nothing in A Midsummer Night’s Dream which is acceptable. I imagine there are puritanical productions that could go further in this mission. This version still allowed the performers to find comic moments. That didn’t seem necessary. And, while cut, it could still have been interfered with far more – although probably not under the original title in England, sadly.

But perhaps this sort of straight-to-the-point moral-lecture production has had its day, at least for the time being. We appear to be living in a period where the insufficiency of lazy binary thinking – re: “morality” and “left” and “right” – appears to have caught right up with us very rapidly indeed. I’m tempted to suggest that a serious course of radical overidentification is called for – Art that, instead of telling us things of which we’re all very well aware, shows us the “hidden reverse” of the state in which we’re now living. I think that potential is already very much present in A Midsummer Night’s Dream, with its humorous depiction of what is at root a rape-state. Perhaps apparent over-endorsement is the best tool for calling into question the appalling times in which we now live.

(And, no. For the avoidance of doubt, I don’t just mean: Theseus/Oberon needs to be played by someone in a Trump wig until America gets its act together and has the idiot shot.)

*The Mechanicals are tricky, now, aren’t they? I mean, “we” “all” know that for comedy to be funny/acceptable it has to be “punching up”. I don’t know, but perhaps in Shakespeare’s day, weavers, joiners and the like generally held a higher position in society than “ac-tors”, much less “Shakespeare”. To this end, I wonder if productions shouldn’t be presenting the “mechanicals” are posh-boy “artisan” hipsters. That would be the thought that occurred to me. (But, again, this is me looking at the play and trying to make it acceptable to modern audiences. Perhaps this comedy-of-cruelty – deliberately mocking the poor and the learning disabled – is some of that radical over-identification that I was asking for. Perhaps this is why we Brits are so wary of it as a strategy – we simply don’t trust anyone else in an audience to “get it” or to think as hard as we know we will be doing. Of course, that lack of trust is probably why we seem to be increasingly fucked as a society anyway. But, anyway. I seem to have gone right off topic now...)

In conclusion: go and see this production. It’s not an easy watch. I don’t suppose it’s meant to be. But, in writing and thinking about it, I might have started to love it a great deal more than I initially thought I did. This might be a sign that it’s great, or simply a sign that I like thinking more than I like watching things that need thinking about.  Hmm.


Anyway, thanks for getting through all that.  Have some music as a reward: