Hansel and Gretel – Opera North at the Lowry Centre, Salford 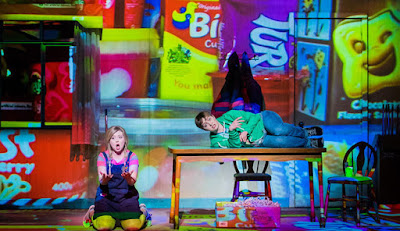 There’s an essay in the programme for Edward Dick’s new production of Engelbert Humperdinck’s 1893 opera, Hänsel und Gretel, written by musicologist Andrew Mellor, which begins thus: “In a field as full of bristling ideology and argument as 19th-century opera, it’s rare to come across a work that everybody seems to adore. But for some reason, we all love Hansel and Gretel...” Reading it just after watching the piece, I thought: yes, that’s exactly right.

I’m a long way from being an authority on C19th opera, but the rest of this essay also seemed to confirm/make sense of the feelings and/or questions I’d had about the music while watching. Essentially: is this what Wagner would sound like with all the ‘I’m also a massive wanker’ taken out? Yes it is. Apparently Humperdinck and Wagner were mates, and the latter clearly had a musical influence over the former. But Humperhinck was also mates with Richard Strauss (who conducted the world première of the piece in Weimar in 1893) and Gustav Mahler (who conducted the Hamburg première in 1894).

Placed in the Lowry’s Lyric Theatre – its curiously coloured, high-vaulted barn of a room, probably better designed as a postmodern stop-off for wandering West End musicals – perhaps the fine detail of the music suffers slightly. But this was the first time I’d ever heard it, I had nothing to compare it with, and I was still able to think it was incredibly lovely, so, y’know...

The main question I had, coming out of the piece was: WHY HAVE I BEEN ALLOWED TO GET TO THE AGE OF FORTY WITHOUT EVER HAVING HEARD THIS?*

Then there’s the production. And, bloody hell... I came out close to swearing that this is the best staging of an opera I’ve ever seen. I mean, “operas I’ve seen” isn’t such a huge field, but nonetheless, there it is: Ed Dick’s Hansel and Gretel seems, to me, to be certainly one of the most impressive marriage of music, staging, and intellectual content/concept/conceits that I’ve ever seen.

It’s helped by the fact that the music is Very Good Indeed, but nosing around on YouTube afterward so I could listen to it again, I did come across enough videos of other stagings to convince me that it isn’t *just* the music that carries it by a very long chalk.

Apparently the design of the show (Giles Cadle) – at root, a very bog-standard, three-walled room – is common to all three fairy tale-themed pieces in Opera North’s winter season. The highest compliment I can pay to its appearance here is that I would have sworn blind that it was purpose built for this exact show, and I can’t imagine the production having a better set. It’s a rarity in British Opera production, because it doesn’t go out of its way to look expensive. Not even expensively grungy. And into this room, Dick and Cadle (plus pitch-perfect costumes: Christina Cunningham) fling the ruins of Brexit Britain, making this Hansel and Gretel not only contemporary but urgent. There’s no silly attempt at mapping everything onto C19th Germany, just odd, funny, often even ridiculous little tweaks (the brushes that H&G are making are union-flag-emblazoned cheap plastic brooms for Brexit celebrations), which remind us of the world we’re living in, which situate the characters in an all too comprehensible framework, but which In. No. Way. interferes with the immediacy of the story or the music. It’s very well done. (Like Icke’s Hamlet, the contemporaneity helps the thing be more like itself today.)

And then there’s the use of video (Ian William Galloway). Yes, yes. I know. We’ve seen video used before. But then, we’ve seen flats painted to look like the inside of houses before too, so moaning about video qua video is pretty much the dumbest thing imaginable. The question is, how’s it used? And the answer here is: about as intelligently as I’ve seen on the British stage. Actually, scratch British; it’d be intelligent anywhere (just less surprising that this was the case on the mainland). It starts out as a handheld camera that H&G use to film each other, live-projected onto the back wall of the set. It feels realistic enough (although the thought occurs that if that family are quite this poor, they could probably feed themselves for a while off the proceeds from the sale of their state-of-the-art camcorder...), but we can maybe not take it too literally.

In any event, this is just the start of it. When H&G leave their parents’ high rise council flat for a forage in the woods, they create the woods themselves by zooming the camera through tacky Christmas decoration trees that their father evidently stockpiles and sells on (when not flogging Brexit brooms). These xmas decorations, filmed close up, and projected onto the blank walls of the flat, become the forest they’re standing in. And then, for another scene change [sorry, bit spoilery...] to the witch’s house, they simply zoom into a fridge stuffed with sugary snacks and fizzy drinks which – projected onto the walls on the stage – become the interior or the witch’s gingerbread house.

The kitschy, trashy aesthetic seems to me to serve multiple purposes at once. On one hand, it provides a semi- social commentary – although, crucially, not one which judges children who live in council flats and like eating sweets – and at the same time, provides precisely the necessary burst of seductive colour to contrast with the drab life of poverty, and the chilly exterior of the forest. It allows the whole to feel like both German art-house theatre (think Castorf and Pollesch) AND British Panto. AT THE SAME TIME. And, more than this, to function as both simultaneously. With no loss of clarity or compromise to integrity of either. Now, if that’s not a bloody neat trick, I don’t know what is. I can’t remember the last time I saw something function so perfectly on at least two level at once.

(Oh, and I should just put in a note here to remind myself, if no one else, that there was a section of pure video footage that played over an interlude/prelude showing young Hansel and Gretel on holiday at the seaside with their gran, and it was ludicrously moving and powerful. Way beyond what was probably intended, but, yeah. Oof.)

The key to the production’s overall success, I suspect, is the binding agent of Humperhinck’s music. It is both jolly and beautiful. Worthy of both enjoyment and respect. And what Dick’s staging does it allow all the possibilities to exist at the same time – alongside some of the clearest storytelling and acting-in-opera that I’ve ever seen. I mean, how often, really, do you see an opera (performed in English, as here) where you really don’t need to read the surtitles? 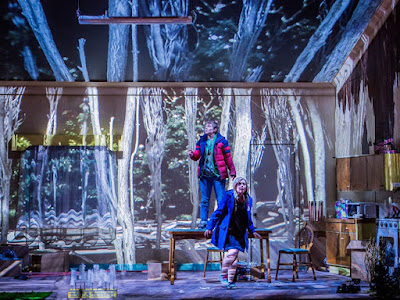 [Also, respect to the Lowry for having the most diverse audience I’ve ever seen in an English opera. Possibly it’s something to do with the fact that NO TICKETS are prohibitively expensive? Who knew?]
Posted by Andrew Haydon at 21:18