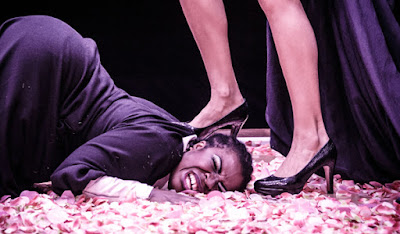 [A confession: I’ve kind of missed almost everything Jamie Lloyd has done. I saw his utterly heartbreaking production of Falsettoland at NSDF2001 (Alan Lane and I wept like babies), I saw his Sisters of Mercy-video version of Oscar Wilde’s Salome for Headlong, in 2010. And then nothing. This really isn’t down to antipathy. I’ve actually quite admired the choice of plays in the Trafalgar Transformed seasons, the casting, the posters, the whole incredibly successful media chutzpah thing. I always just assume it’s really hard to get press tickets for West End shows, and that they’re too expensive to buy your own. Plus, y’know, I have been busy, too. Still, I’m bloody glad I’ve managed to get to something, and now more than slightly sad I didn’t do something about getting to The Homecoming, or Richard III, or a bunch of other things...]

[The whole “Jamie Lloyd Directs...” thing is really interesting. I mean, here’s a young director who’s not really come through the subsidised sector, and yet, apparently just by force-of-will and proven track record, seems to be running London an extra National Theatre in the West End. The choices of plays seem pretty inspired to me, too. Solid classics that nonetheless, you haven’t necessarily seen all that recently. And all packaged up with really appealing casts and publicity. You might think I’d be cynical about it, but when it’s selling a massive bunch of £15 tickets, has the sort of demographic that anyone applying for ACE funding would kill for, and unshowily has the performance surtitled in English (presumably for both deaf and English-second-language audiences), well, there’s *a lot* to like even before we get to the actual production...]

And, for a cold, grey Monday, there was a hell of a pre-show buzz in Trafalgar Studio One last night. Which you’ve got to love. Pre-show music included Strict Machine and Fuck The Pain Away (and even a bit of Zadok The Priest...), while on stage sits a kind of fancy museum case in polished wood, with the blinds down. The sort of thing they used to have rows and rows of in the Natural History Museum, if I remember rightly. The sort of thing in which large, savage, stuffed animals were displayed in their natural habitats. Here, of course, it doubles up implying the opulence of the Paris/Southern States apartment that the titular maids – Claire and Solange – are cleaning. The point is made so cleanly that it only really registers subliminally at the time.

Uzo Aduba and Zawe Ashton are fucking great. The first scene – the incredibly famous one where Claire is pretending to be the mistress – is just on fire. And *strange* too. It’s not delivered in a way where you fully feel you’ve grasped everything that’s going on in their psychology. Or if we’re even looking at “psychology” at all. I’ve got a vague feeling that Aduba, Ashton and Lloyd really worked out *a thing* and while, yeah, the basic thing of it is totally clear, it really feels like there’s a ritual we’re observing here that we’re only meant to understand we can’t understand. I like that idea very much.

I mean, I say “the incredibly famous scene”, but is it? Is The Maids one of those plays that literally *everyone* who studied drama at university has seen produced with three blokes in drag, and that’s it? For extra points, I also saw a version in Estonia with three late-middle-aged women acted completely naturalistically. *Appallingly*. It still stands out as being one of the worst productions of anything I’ve ever seen (sorry National Theatre of Rakvere, :-/ ). But as a result, I realise I don’t actually know The Maids well enough to spot/know significant deviations from the “standard” version. I don’t remember previous versions I’ve seen having this ending – which is great, and powerful here. So you’d think I’d remember it from other productions, but I don’t, although maybe they dragged so much that I’d stopped really taking anything in by the end. So I find myself wondering if this is an invention of Australian adaptors Benedict Andrews (of Young Vic Three Sisters fame) and Andrew Upton (most familiar from some very fine versions of Russian plays at the NT).

And, it’s reading reviews of Andrews and Upton’s original production (in Sydney and New York), that you suddenly get a sense of just how much further Lloyd has improved on the original adaptation.

I find The Maids a tricky play. Like Endgame, ten years later, it seems to hail from a school of post-war French absurdism that tips into complete nihilism. But where Beckett displaced, de-personalised and distilled those instincts, with Genet they feel raw and lived at the same time as poetic and abstract. The fear of surveillance, and of reporting the mistress’s partner/husband to the police reek of a country only just released from the grip of Nazi-occupation, and perhaps the subsequent witch-hunting of collaborators. Meanwhile, Genet’s own, now near-mythical status a rent-boy, thief, and jailbird, the original Queer artist, all adds not just literary-interest, but also the stamp of something authentic, something more than mere posey speculation.

The most obviously brilliant thing about Lloyd’s production is that Claire and Solange here are black. Everyone’s doing an Southern-States American accent – which has an iconic resonance of its own, independent of context, but here resonates much, much further. There is a result where you (I) end up watching post-war France through the veil of distant American problems, but as the internet and history prove, America’s problems are our problems. And, beyond this, *actually*, even though I’ve (obviously) never been “in service”, you can watch this as a socialist, and see a fairly obvious political and psychological truth being articulated. (I dislike the word “universal”, but this gets pretty damn close to something very essential indeed.) Another part of the reason it’s brilliant is because they’re the *stars*. I’ve never watched Downton, but I was pretty excited to see her off of Orange is the New Black live. And Zawe Ashton is now pretty famous as this generation’s Neil from the Young Ones, as Vod from Fresh Meat (although I remember her as Lloyd’s Salome, and from Crimp’s Rhinoceros, and from hanging around bunch of Paines Plough Lates...). But this is incredibly important. How many plays ever get promoted in the mainstream off the back of famous black actors? Still incredibly, incredibly few, and even fewer of those are women. I think Lloyd and his team have been incredibly canny spotting that this situation is bullshit. And fuck any critic who says they’re “telly actors”. Sure, they’re *famous* because of telly (who gets famous from theatre?), but clearly they’re both seasoned and excellent stage actors. It seems unfair to compare and contrast The Maids with Made Visible, but I will say that here you get a real feeling of actors who have real agency, and whose performances are a statement of power.

Moreover, it’s *The Maids*. It’s not like this is a sort of chocolate-boxy papering-over-the-cracks pretending that we live in anything like an equal society by putting on a nice comedy. This is accusatory as anything you could hope to see on the far edges of the fringe. What’s fascinating, in fact, is that Lloyd seems to actually advance something much more progressive here, than Genet’s original nihilism. Where the original could be seen to trade on a kind of existential despair, and psychology of the downtrodden, annoying those who saw the original case on which the play was based as a hopeful sign of a nascent workers’ revolution, here I think we get a vision of a society so traumatised that something is inevitably going to give way. Yes, watching two women fantasising about killing their mistress feels, if anything, more relevant now than at any prior point in the 59 years since the play was written. Watching it a few days after George Osborne’s most recent disastrous budget, you could virtually feel people itching to wander off down Whitehall and start throwing things. Not long now, perhaps.

Do you remember the rest of the pre-show music that played?