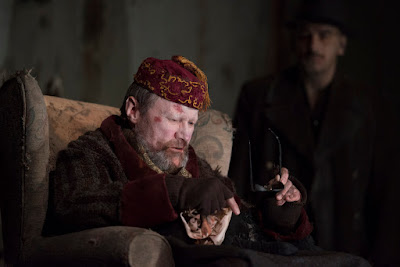 First seen in England in 1957 (although Tynan’s review is from 1958), Samuel Beckett’s Fin de Partie is now pushing sixty. And yet, thanks to the pathological insistence of the Beckett Estate, it hasn’t changed a bit. I first saw Endgame as a student production in 1997, when the play was a mere forty – already a revered relic of a “Royal Court Golden Age” that had passed into legend and then into academia before I was even born. It’s strange to think now, that such an age is still so recent that certain of our living critics can still remember it. I remember the production I saw as punishingly long, brilliantly done, very “pure”, and tortuous. I didn’t feel any great need to see another one for the next twenty years.

The good news here, or not, is that this production is a good deal more bearable. Entertaining, even. And runs at 90 minutes without interval. (Indeed, the visit, including travel to and from HOME, fitted comfortably inside the running time of Husbands and Sons, currently playing up the road at the Exchange). All of which endears the thing to me greatly, but makes me worry that it’s maybe not doing its existential job properly. This is a production that pushes the whole thing as close as possible to being entertaining without being estate-vetoed.

David Neilson (whose Coronation Street screen-wife famously died of cancer at the Exchange throughout January) wheedles and blusters his way through Hamm. He’s amusing and imperious. A bitter, flamboyant, tart, old stage turn, condemned by circumstance to play out his days at once in a draughty room, and somehow also always on a stage, addressing us the unseen audience.

As we know, he is attended upon by stiff-legged, hunched servant Clov...

[There’s probably a lot to be said about the extent that society has moved on from this kind of use of disability to signify thwartedness. I mean, how many actually blind wheelchair users have played Hamm? It’s starting to feel a bit like watching white actors black-up to play Othello now. This is one of THE great disabled roles of the canon. Whether disabled actors would want to condone it is another question, and one that I’m not remotely qualified to answer. I will say, though, watching from a seat next to someone with cerebral palsy made these questions feel a lot more urgent.]

Chris Gascoyne as Clov is really interesting, with a strong take on how to perform the part. It’s slightly detached. Slightly disconnected. It’s certainly not always psychological realism as I understand it, but maybe the reality that Clov’s psychology inhabits wouldn’t be very recognisable anyway. Gascoyne plays Clov as someone who has lived every scenario we see him in before. His answers to Hamm often seem to come without listening. Like delivery of lines he just knows he has to say. At once the actor in this situation, and the character in exactly the same bind. This possibility is reflected in the way Hamm tortures the audience with teasing, double-edged meta-theatrical jokes about the possibility that “it’s” nearly over. “All this is just play” perhaps, as another Beckett has it.

Peter Kelly as Nagg is much funnier than I remember the part, but (picky me) I think both he and Nell (Barbara Rafferty) suffer for not *really* being in their dustbins the whole time; instead transparently popping off through a trapdoor for a cups of backstage tea between their infrequent scenes.

Designer Tom Piper has made this iteration of Hamm’s “bare interior” (lit by Lizzie Powell) something like the inside of a large cargo container with high rusting metal walls. This might resonate more in erstwhile ship-building/port city Glasgow, than derelict cotton mill Manchester, but it’s fine. Moreover, the sawn-off edges subtly imply that we’re all in the container with them *really*. And I guess that’s the sense that Beckett’s aiming for. This is, after all, a big old meditation on the bleakness of life, the inevitability of death, etc. etc. Right?

Being dimly aware of “the reviews”, I vaguely remember some grumbling that Beckett’s 1950s post-nuclear war apocalypse no longer resonates any more. No war is specified, so I’d say that this historical reading is unnecessary. It *could* definitely feel like a very relevant vision of our globally warm future, cf. a certain Hamburg production of Happy Days. It doesn’t here, paerticularly, but I suggest it the play has an active or effective future, that is it.

Meanwhile, this feels like a very serviceable museum piece. Lovingly restored. Accurate, somehow, but not fully present. A helpful reminder of history and our recent past. A way to think about the old times, as the play also does. But perhaps here seduced by those memories too much to talk about what’s next, or even what’s present.
Posted by Andrew Haydon at 16:24