Made Visible – The Yard, Hackney 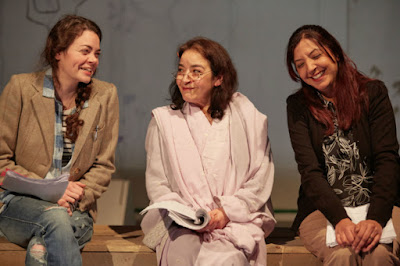 As such, it’s actually a pretty good dramatised attack on this model of writer>meaning relations within theatre.

Sub-thesis: while at first glance it might look mildly irresponsible not to go along with the idea that the show really is about white privilege, I already know every bit as much about white privilege as *the author*, and learnt it in the same first- and second-hand ways (first by having it, then by it being pointed out to me that I had it by people who didn’t). So that wasn’t the interesting bit for me here. (Commissioning thought: plays about the existence and exercise of white power probably reinforce white power less if their authors aren’t white. I get that it’s important to talk about it, and I get that it’s probably good to have had this piece written, but let’s look forwards now...) The interesting thing here (for me) is about power and theatre. (Emphasis on “the author”, not only to remind ourselves again of Tim Crouch’s play, which similarly (post-?)dramatised slippage of meaning and abuse of power, but also to highlight the strangeness of such an old-fashioned construction of how I’m proposing that “meaning” or “power” might be transmitted/exercised here.) The basic “plot” of this meta-theatrical playlet is essentially Multicultural Zoo Story In Search of An Author: “Deborah” (Haley McGee) meets Ila (Mia Soteriou) on a bench in Victoria Park, after 24 pages of dialogue and digression they are joined by Ayesha (Anjali Mya Chadha).

Rather than simply write a drama depicting this encounter, Pearson has “Deborah”, Ila and Ayesha come out of character, but not off-script, to deliver commentaries on the situation, and particularly the power imbalance of all three actors speaking her (actual-Deborah)’s words. “Isn’t it terrible,” the piece seems to say, “how I, Deborah Pearson, can have all the power in the room, can make all these performers say what I demand; even while pretending to extend freedoms and courtesies to them?” Which *is* a good analogy for the privilege enjoyed by white people in Britain, but a somewhat old-fashioned view of how plays can work.

The elephant in the room here is that the director – Stella Odunlami – is black. And is made spectacularly invisible. This is completely fascinating to me. The poster image is a picture of a young woman who looks a lot like (real-)Deborah (albeit with her face cut out). And these are all the words on it:

“MADE VISIBLE
‘Who said anything about a racial lens?’
15 March – 9 April 8PM
Written by Deborah Pearson
#MadeVisible”

No named director. No named actors. Just title, slug-line, author and hashtag. Such is the default theatre culture of Britain (and beyond that, the anglophone theatre world): the writers’ theatre culture (in the age of social media), perhaps. But, apart from the hashtag, isn’t it already a bit out-of-date? (and, ironically, in part because of the work that Pearson, along with Field and Brand has done with Forest Fringe) Directors’ names *are* used to sell tickets now. And actors’ names always were, lots. I wonder if this marketing image sets up an extra bunch of problems for an already “problematic” project? I mean, unusually for British theatre, there isn’t actually a single white English person actually involved in the main creative team. Or any men. (The designer is Hyemi Shinn (again! Twice in one week!)) There are only two white women involved, and they’re both foreign. But you wouldn’t know any of that from the poster (because posters can’t give themselves away with a Canadian accent). So, yeah, on one level, the poster is about the assumptions that the play is addressing. But it’s also the main marketing tool for the piece. And to whom will it appeal? If the – non-press-night – audience I saw it with on Saturday is indicative, it appeals to a small-ish number of mostly white people who are interested in seeing a piece that has been trailed in the Guardian as being concerned with white guilt. So as well as addressing assumptions, the poster also makes some more of its own, and sets up further assumptions for others to infer, perhaps.

[I mean, sure, maybe there are not-actually-racist white people who have somehow missed the memos about their ongoing disproportionate power (I’m assuming racist white people either a) don’t believe the memos, or b) don’t care). And they do seem to be the target demographic for the show. Although I’m sure anyone not-white who sees it will be hugely reassured that a small sub-group of middle-class whiteys are all so worried all this power they’ve got, although I daresay they already knew that.]

What’s interesting, is how poster does largely reflect how the production *feels*. Or perhaps it leads you to that conclusion because of how it looks. Who can say for sure?

Because, yes, how this production looks is: like the director and designer have tried to serve this “anti-theatre” script as invisibly and faithfully as possible. Ditto that cast. To be fair, as an example of script-serving theatre, Odunlami should be incredibly proud of it. It really does achieve precisely the feel of some actors speaking the words they’ve been given, as if they have literally no agency at all. Indeed, it’s properly fascinating that it’s so disciplined. Because, by what is that discipline really enforced? I mean, on this level, it really asks some questions about the sublimated power-structures of theatre. There’s even a bit where the two Asian actors are given a minute each to say what they really think of the piece, and the white actor is given 30 seconds. From this we perhaps glean that there is a certain amount of discomfort the piece within the company too. It’s interesting that I do take on trust that this bit *really isn’t* scripted. I mean, it’s interesting how much of any of it we take on trust. In this, we’re right back with the questions The Author asked.

There’s a much longer essay to write about the extent to which anyone/everyone’s theatre-going habits are entirely dictated by narcissism. But, just as I was completely fascinated to be in a theatre packed with white working-class English men watching a play about football last Friday, I’m equally fascinated by the extent to which other audiences are apparently largely repelled by anything not about themselves too. Obviously I’m white and middle-class (although the male bit makes me more of anomaly among theatre-goers than not according to statistics) so I’m not ideally placed to comment on any of this, since “theatre” in Britain is apparently a white, middle-class, and still disproportionately run-by-men activity, so I can go to all of it with a massive feeling of entitlement. (And I really can’t dispute that analysis at all). I don’t even go out of my way to seek out theatre outside the white mainstream.

Obviously I’m hugely privileged and totally white, so probably the best thing I can do is to shut up, though, since I’m plausibly too unconsciously predisposed to “my own” culture (white, middle-class, middle-aged, male, ex-goth, modernist/postmodernist, Northern European, Germanic, socialist, etc. etc.) to be able to even really truly appreciate anything outside it.

It’s odd, though, if this piece *hadn’t* been directly addressing the subject of white (and male?) privilege/power; in simple terms of the people involved, it would surely have felt like one of the most progressive independent-theatre shows in town.

I wonder if there’s a thing where a certain sort of theatre breeds a resistance to whatever it is it’s saying? Even if it’s something that you already agreed with. Especially if it’s something you already broadly agreed with? Something about directness? Or something to do with the idea (cf. The Author) that, actually, it’s in our heads – in the heads of the audience – that meaning is actually constructed, so it’s with us that the ethical duty lies to resist these conclusions. Stuff to think about, anyway.