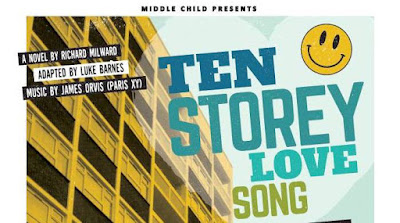 [So, one of the things that’s important to do is to travel, and support young(-ish) companies. But there’s always that chance that hypothetical young company and I aren’t necessarily going to align, no matter how much travelling was involved. But, rather than say nothing, it’s important that the coverage exist, if only to make the work part of a wider conversation. So, I’ll kick this coverage off with the main point, which is: this is only my opinion. It’s one I’ve thought about, and tried to express as helpfully and clearly as possible, but it’s (very) open to disagreement.]

Ten Storey Love Song is a stage version by Luke Barnes of the novel by Richard Milward (which I haven’t read).

This is the publisher’s synopsis of the novel:

“Bobby - the so-called 'love child of Keith Haring and Basquiat', hoped up in a Middlesbrough tower block - works on his canvases under the influence of pills-on-toast, acid-on-crackers and Francis Bacon. When Bent Lewis, a famous art dealer and mover-shaker from that London appears, Bobby and friends are sent on a sweaty adventure of self-discovery, hedonism and violence involving a 2.5cm-head curved claw hammer.”

Which is quite a relief. Because, reading this, I think it’s fair/reasonable/easy to say that it’s probably the novel/story/plot that I didn’t love, but Luke Barnes has done a great job of adapting it for stage.

I really liked Middle Child’s last show, Weekend Rockstars, and a large part of that was because of the live-on-stage gig feel of it. Here, that extra-liveness has gone a bit. (Or rather, the live music component has been downgraded to bloke with a laptop and a singer (Jamie Orvis and Anna Wilson). Now, I realise I should be more respectful of this. Bloke is clearly doing more than hitting play, and Sleaford Mods are one of my favourite “bands” anyway. So I shouldn’t mind, but there is something inherently less dynamic about the set-up, if only visually.)

What there is instead is more set (Natalie Young). A multi-level, pop-art assemblage of stage blocks with drawers, cleverly suggesting the insides and outsides of the Middlesbrough tower block and its environs where the play/novel is (mostly) set. Which frees up the performers for more performing. It’s still pretty front-facing, but now radio miked, rather than mic-standed. It’s interesting the effect that just this and the coloured lights have. It *looks* a lot more like A Musical than A Gig. Still, it’s all perfectly effective, even if the first five minutes did feel so full-on, abrasive, “in-yer-face” and OTT on the “offensive” front (i.e. I wasn’t offended, and nor will anyone else be, but it’s in the genre of “offensive”), that it took a while to tune in to the underlying wry, self-deprecating humour. Imagine trying to listen to John Cooper Clarke while someone plays an Ibiza ‘95 CD really loudly over the top. [And then, if you want to be me, assume that you don’t much want to hear the Ibiza’95 CD at all.] But like I say, you get used to it.  Actually, director Paul Smith has hit on a pretty effective style. Maybe a bit blunt, but effective. Being in Hull, I couldn’t help but be reminded of John Godber. Although I think I might have been, wherever I saw it. There is something here that recalls the best of student productions of Teechers or Shakers. Unfaultable dedication and talent, if not my favourite ever material.

But, yeah. We do need to talk about the material.

Now, clearly I’m precisely the wrong southern, middle-class ponce to really warm to a play that prefers to redeem a violent porn-addicted murderer than the gay (pseudo-)intellectual art dealer in That London, who tries to exploit said murderer’s painter neighbour. But, the play is essentially so anti-intellectual, problematically homophobic, hetero-normative, anti-pornography, anti-Queer, blokey and straight, that if it didn’t crowbar in an anti-racist message (as well as a more inevitable anti-paedophile message), it would be Nazi art.

(In strict fairness, an alternative reading here is that the morality is so lightly sketched and cartoonish – the poster advises us to think of Shameless, and I can see its point; the sickening violence shouldn’t really be taken seriously – that it’s wrong to extrapolate like this. Except I think Shameless (the first series or two anyway) actually had a remarkably strong grasp on its morality. Anyway...)

Bobby the Artist is a true, working class, Völkisch hero. He is nearly seduced by sophisticated, cosmopolitan types in the metropolis, but, with the help of his trusty girlfriend – who throws out all his drugs, leading to him having some sort of Romantic realisation that his art should be more “honest” and “straightforward” – he comes through for us.

So, yes, I found the underlying tow of the narrative staggeringly reactionary and borderline right-wing. But DEFINITELY NOT RACIST. Middle Child Theatre Company ARE NOT NAZIS. Ok? I’m not saying that. I put this thinking out here if only to at least make the company check with itself that it hasn’t accidentally made something that says a lot *extra* to what they wanted.

I’m not kidding about the Nazi art thing, but I do want it to be understood specifically in terms of the anti-intellectualism and anti-Cosmopolitanism, rather than a flailing accusation of racism or anti-Semitism which clearly isn’t there at all. In Berlin in 1933, intellectualism and cosmopolitanism were associated by Hitler with the Jews, in Hull in 2016, it’s just *London*. And London’s comparative diversity isn’t blamed or criticised. Its apparent pretensions and superficiality are. Which, while not the most searing socio-economic critique, isn’t fascist either.

Still, I’m sure I’m radically-over-intellecualising what is intended as “knowingly un-PC” blokey fun.

There are lots of other bits I really liked. There’s a fine vein of surreal humour stemming from lots of the actors doubling up as various pigeons, police sniffer dogs, hammers, and hallucinations. The deadpan “Bark. Bark. Fucking bark” [or is it “woof”] uttered by the policedog is particularly amusing. The video projections (Euan Baker) are imaginative and evocative. And all the performances are sparky and incredibly watchable.

And, look, apart from finding it hard to know what to do with the undercurrent that I found myself unable to ignore, it’s not at all a bad show. It’s well done. It’s fun. It just disturbed the fuck out of me. Which is a weird way to spend time in the theatre.