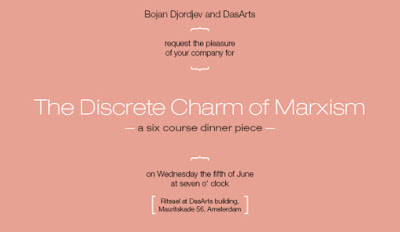 Ok, so here’s a thing. Going into this show, I was a bit sceptical. A week later, that position has quite radically altered. I took the following notes on my phone, which, as will become clear, was fine within the context:

“Despite the intriguing Buñuel-referencing title, The Discreet Charm of Marxism suffers for being precisely the sort of thing I hate most in *performance* – it’s an example of what we might called “de-centred interactivity”. That is: we the audience mostly interact with each other. Some people just adore this sort of thing *as theatre* (rather than say, *as the pub*). That's totally fine. But equally, I don't. Which I guess has to be allowed to.

“The impulse and manner of our interaction is: bits of Marxist literature served to us as if they were items on a menu. Here is the menu:

“We sit at impromptu office tables on the small stage of the Jugoslav Drama Theater arranged as if in a (very odd) restaurant. We sit largely in quite a bemused silence.

“The main problem here is that the terms of engagement are so poorly defined as to be non-existent. ‘Here are some snippets of things some prominent Marxist thinkers have written. Talk’ our host seems to suggest.

“Oh, yes, there’s a host. He is presumably Bojan Đorđev, the artist who conceived the piece, and now stands in as an ingratiating waiter. Precisely the sort of waiter I abhor, but, y'know. My friend Grzegorz and I make cynical small-talk as artist/waiter flogs the Marxist snippets-as-food metaphor pretty hard. I have a stab at the Nâzım Hikmet Ran salad. It’s nice.”

But, as I was politely taking these cynical notes, something actually started to happen on other tables. The notes go into “real time” here:

“Woman challenging him [about the point of the show]. She’s making very good points.

“She’s a dramaturg. [thanks to Grzegorz for local knowledge]

“Lesson: never put a show with a slightly shaky concept, which depends on interaction, in front of an audience composed solely of critics and dramaturgs.

Artist: ‘My genuine intention was to take some of your time...’ (gets a big [hostile] laugh)

“Some interesting things being said.”

“ ‘I was born in the Soviet Union. I am a vegetarian. I cannot eat this.’ [this from a Russian critic, being amusing about the concept of the show. Successfully. In her second language.]

Another critic: ‘Wrong to read Marx as “wrong”. We don't say this about Hegel...’


Now, what’s fascinating to me is that, while in theory the show *as planned* seemed to fall apart under the scrutiny of a lot of critics and dramaturgs almost exclusively from ex-Communist or Socialist countries, what I actually ended up seeing was perhaps one of the most useful political discussions I’ve ever seen in a theatre.

I think it’s important that it happened in Serbia, and that the participants were drawn from countries with first-hand experience of communism or socialism.

But perhaps the thing that made most impression on me was the person who spat the word “democracy” in the same way that “socialism” is a swear-word in the United States. This was maybe only a week or so after Corbyn had been elected as member to Her Majesty’s Opposition (FFS), and the British press had yet relent with their ludicrous campaign of negative stories.

Nevertheless, it was an instructive time to be British. Of course we now know Marx wasn’t much of a prophet – or, viewed more charitably, said a lot of optimistic things that were seized upon quite unhelpfully. As a piece, it made abundantly clear that the vocabulary of socialism had been allowed to be trapped in the past, and with an analysis which, while brilliant, is also in dire need of a massive, rigorous overhaul.

So, actually, and even true to discussing the problem implied by its title, the show completely fulfilled its brief. A week or so down the line, it feels a bit like it’s possibly the piece of “political theatre” that has made most impression on me *ever*. There is literally no way that the myriad ideas and opinions expressed *because someone became too cross not to say them* could ever feel the same if written and rehearsed. So, yeah, maybe there’s even something in “de-centred participatory theatre” after all, if something that really matters is at stake.

Here’s the Buñuel, with subtitles not in English, but we all know French, right?