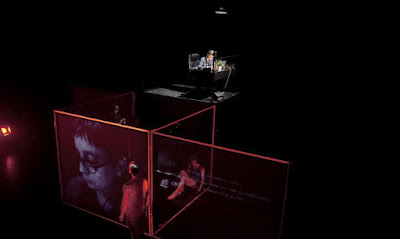 On May 15th, 2005, the American novelist and poet Dennis Cooper started a blog.

Writing about Cooper’s blog here feels slightly stupid, since you could just click this link and have a look for yourselves. And, weirdly, because they’re both websites on the internet, both blogs, and both on the same blogging platform, it feels especially superfluous; like describing a neighbour’s house to someone sitting next to you who could also look at it.

[But I’m going to describe it anyway.] The blog is basically a kind of curated magazine of stuff that Dennis Cooper likes, and his guest “curators” like. There are posts about bands, lists of top ten favourite cartoon characters, collections of Stewart Lee material, and so on. And then there’s also a fair amount of stuff about (often very violent) gay sex, collections of adverts for “slaves”, for rent-boys, etc. If you’ve ever read one of Dennis Cooper’s novels you’ll maybe have some idea of the sort of tone to expect in these bits. (If not; Dennis Cooper's novels tend to feature the torture and eventual murder of very young men evocatively described.)

And this piece sort of functions in the same way, mostly pointing toward the various bits of the blog, and the personal interactions between readers, and some video interviews with readers, and Cooper himself(?), and maybe some nods to the worlds depicted n the fictions and/or fantasies (or, possibly, realities).

The set is essentially two cube-like frames; one opened out into three gauze screens, and the other serving as a sort of raised platform on which Karen Christopher (“playing” Cooper?) sits at a desk, talks into a black and white live-feed video (slightly out of sync with the miked voice), and writes at a laptop. There looks to be quite a lot of naturalistically (sp?) detailed clutter on the desk.

In general the piece is played under (or to the side of) low lights, and red and blue coloured lights, and latterly, in amongst red pretend-tealights covering the floor.

There is a small amount of male nudity in the performance. And possibly a couple of violent images projected. At the end, there is a sudden interaction between the three male performers of the piece (Nick Finegan, Craig Hamilton, Christopher Brett Bailey) in which one spits on another’s asshole and eats him out while the other strangles him (to death, in “the world of the play”, it seems) with an electric cord.

Prior to this, the piece has perhaps largely felt like a lot of only tangentially connected solos, the odd “narrative” is possible to discern. One sequence shows a young man cutting his wrist and sending a selfie (well, a bleeding wristie) and “Cooper” replying in what feels like a personal email, but which is presumably on the blog, with a concerned and kindly response, asking the young man not to send photos like that to him.

In the run-up to the performances, Maddy Costa did some interviews with the cast and wrote elliptically about her own experiences of the rehearsal room. To be honest, these contain far more “difficult” content than anything that made it into the show. But perhaps set potential audiences who had read them up for something quite different. (I for one had steeled myself for a lot more “livid” descriptions of child abuse.)

I have mentally noted that several people I like and respect have come out in favour of Weaklings, a couple of them suggesting that the piece was speaking to them in a language that they needed it to, and one which they hadn’t seen on stage before.

To be honest, the piece didn’t speak to me at all. I think in large part I’m blaming that on Serbia, BITEF, Jonathan Capdevielle and Gisele Vienne. That is: there was nothing wrong with any of the elements in Weaklings on their own, but – my fault, probably – it felt like I’d seen all of them elsewhere and arranged much better, less timidly, less  “English”-ly.

There’s that cliché that shows teach you how to watch them themselves. The bit of this show that I read as doing that was the following quote about Slowdive: “[which I can’t find now]”.  But I don't think even that should have been a problem. Necessarily. It’s just here that it felt like one.

To be honest, I’d much rather be having this as a conversation with someone who liked it, or someone who made it, rather than just sitting here uncomfortably telling you how I felt about it.

Anyway. At least we’ve got this document of what I thought at the time, now. I daresay it’s a view that’ll modify over time.

Still, it includes this cover version: